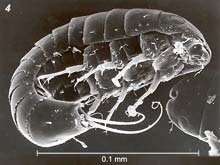 Oxford scientists have discovered a particularly macabre method one parasite (Strepsiptera) has for disguising itself in its insect host: it wraps itself in a piece of the host’s own body tissue. In this way the strepsipteran masquerades as ‘self’, and is protected from the insect’s immune system.

The mechanism whereby Strepsiptera flourish without interference from the host has so far been a mystery. Scientists have been intrigued by the exceptional diversity of host insects exploited by the parasite. They were even more mystified by the fact that in one family, males and females parasitize different insects: the males live inside ants, whilst the females live inside grasshoppers, mantids and crickets. What, they wondered, was the mechanism allowing Strepsiptera to overcome the immune response of such diverse hosts?

To find out more, Dr Jeyaraney Kathirithamby of the Department of Zoology and her colleagues observed samples of the parasite before, during and after host invasion. She saw that the larva of the parasite enters the insect by repeatedly jabbing against its cuticle with its head until it can burrow inside. Once it is just beneath the cuticle, it remains in constant motion and its ‘wriggling’ separates out the epidermis from the endocuticle until the epidermis encloses the larva. This eventually forms a kind of bag, which separates off, allowing the larva to move deeper inside the host, safe in its bag of tissue.

Observing the enclosed parasites in a liquid medium showed that Strepsiptera grew, molted, and absorbed all its nutrients through the bag. DNA tests of the bag confirmed that it was indeed host-derived.

“Parasitoids have evolved a variety of strategies for overcoming the host immune response,” says Dr Kathirithamby. “This mechanism of camouflage adopted by Strepsitera has not been observed in any other group before, and is yet another fascinating feature of these unique parasites.”