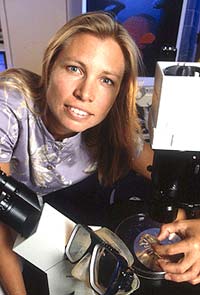 Assistant Professor Julia Kubanek and her colleagues at the Scripps Institution of Oceanography have investigated a seaweed called Lobophora variegata (see below) and discovered it has a strong antifungal potency and potentially some cancer-fighting power. <br>Georgia Tech Photo: Caroline Joe <br>

Scientists have discovered that seaweeds defend themselves from specific pathogens with naturally occurring antibiotics. The finding helps explain why some seaweeds, sponges and corals appear to avoid most infections by fungi and bacteria, according to a study published May 19 in the Proceedings of the National Academy of Sciences.
“Seaweeds live in constant contact with potentially dangerous microbes, and they have apparently evolved a chemical defense to help resist disease,” said lead author Julia Kubanek, an assistant professor of biology and chemistry at the Georgia Institute of Technology in Atlanta. “These plants have a really effective way of defending themselves.”

Few studies have addressed disease resistance in seaweeds, and seaweed diseases are little understood, except for species that are commercially important – for example, the seaweed used for sushi. This study’s report of isolating a potent antifungal compound contained in the common seaweed species Lobophora variegata reveals an unusual chemical structure not seen before in plants.

And the study lends insight into the ecological interactions between this seaweed species and other marine organisms, Kubanek said. Also, it presents the possibility of biomedical applications for the newly discovered antifungal compound, she added.

The research – funded in part by the National Science Foundation – was conducted in collaboration with colleagues Paul Jensen and William Fenical at the Scripps Institution of Oceanography in San Diego, Calif., Paul Keifer of Varian Inc. in Palo Alto, Calif., and researchers M. Cameron Sullards and Dwight Collins of Georgia Tech.

“Based on the antimicrobial activities we detected in a large survey of many different algal species, it is possible that antimicrobial chemical defenses are more common than previously believed and that L. variegata may be one of many species that use natural antibiotics to defend against infection,” Jensen said.

Jensen devised a bioassay to measure the antimicrobial potential of a common seaweed species, Lobophora variegata. He combined biological extracts from seaweed harvested in the Bahamas with a fungus or bacterium and monitored the sample to see if the microbes grew. Of the 51 samples tested, 46 exhibited extraordinarily potent antifungal activity that could be traced to exceedingly low concentrations of an antifungal compound in the seaweed. Suppressed growth of microbes in the samples suggests that a natural antimicrobial compound is at work, Kubanek explained.

“We have discovered a new antibiotic with a complex chemical structure that structurally resembles two groups of macrolide antibiotics (i.e., those that kill fungi) — one found in marine sponges and the other in blue-green algae,” Kubanek said. Because of the tiny available quantities of this new compound, researchers have not applied for a patent yet.

The pharmaceutical company Bristol-Myers Squibb and a San Diego biotechnology company, Nereus Pharmaceuticals Inc., are partners with Scripps and are collaborating on related ongoing research. Scientists still need to determine whether the seaweed is actually the original source of the antibiotic, Kubanek added. The antimicrobial compound could be the byproduct of symbiosis between the seaweed and an as-yet unidentified microbe. If this is the case, it would be one of the rare examples of such a chemical defense for plants and animals, researchers reported.

They believe that further investigations of chemically mediated interactions between marine microbes and larger organisms are likely to reveal new molecules and mechanisms that enable marine plants and animals to persist despite intense microbial challenges, researchers wrote.

“Ecologically driven studies, such as this one, which used …. marine fungi in operationally simple assays, may be a promising strategy for uncovering novel natural products of commercial interest,” the authors reported.