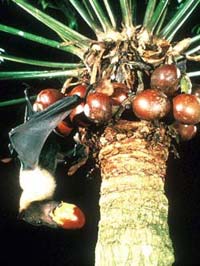 Maybe you really are what you eat. This would solve the long-time mystery of why so many of Guam’s Chamorro people – up to a third per village — suffered a devastating neurological disease. A new study suggests that they gorged on flying fox bats that in turn had feasted on neurotoxin-laden cycad seeds.

“Through the consumption of cycad-fed flying foxes, the Chamorro people may have unwittingly ingested large quantities of cycad neurotoxins,” say Clark Monson of the University of Hawaii, Honolulu, Sandra Banack of California State University, Fullerton, and Paul Cox of the National Tropical Botanical Garden in Kalaheo, Hawaii, in the June issue of Conservation Biology.

Guam’s indigenous Chamorro people historically had a high incidence of a neurological disease with similarities to Lou Gehrig’s, Parkinson’s and Alzheimer’s diseases. Called ALS-PDC (amyotrophic lateral sclerosis-Parkinsonian dementia complex), the disease’s symptoms range from muscle weakness and paralysis to dementia. The rate of ALS-PDC has been as much as 100 times higher in Guam’s Chamorro people than in the continental U.S.

Monson and his colleagues hypothesized that the answer might be another thing unique to Guam’s Chamorro people: they love to eat the local flying foxes. These bats, which have a three-foot wing span, are served at Chamorro weddings, village fiestas and religious events. The preparation is simple: wash and boil whole, and then eat the entire bat — wings, brains, fur and all.

Eating too many of these flying foxes could be dangerous because they like to eat cycad seeds, which contain a neurotoxin called BMAA (beta-methylamino L-alanine). The bats are probably neurotoxin-rich because studies have shown that when rats ingest BMAA, most (90%) of it stays in their bodies rather than being excreted.

Several lines of evidence support the link between eating these bats and contracting the neurological disease. Previous studies have shown that Chamorro populations outside of Guam do not have higher incidences of the disease, suggesting that it is caused by an environmental factor. In addition, the disease is three times more common in men than in women, and men like to eat the entire bat while women tend to eat only the breast meat. Finally, the incidence of the disease rose after people began hunting flying foxes for commercial trade and then dropped as the bat population fell.

Eating wildlife has threatened people’s health in other cases. Thousands of people in Kyushu, Japan, who ate mercury-contaminated fish suffered neurological problems, birth defects or even death. And people living in the Faroe Islands eat whale meat and have high levels of mercury and PCBs.

Eating wild animals that have not been commercially traded for a long time may be particularly risky because they could have unknown health risks. “We urge caution in the consumption of recently commercialized wildlife species,” say Monson and his colleagues.