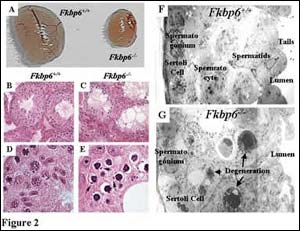 Figure 2: <br>Panel A shows a normal-sized testes in male mice (on left) versus a significantly reduced testes size in mice without the Fkbp6 gene. Panels B and D show normal sperm cells in normal male mice while the large white areas in panels C and E indicate a lack of mature sperm cells in Fkbp6 negative mice. Panel F shows spermatids, spermatocytes and tails (all needed for healthy sperm cells) versus panel G which indicates that none of these components exist. <br>Images: Dr. Josef Penninger, University of Toronto. <br>

A gene that belongs to a family of genes implicated in heart disease has been found to be essential for male fertility but has no impact on female fertility, researchers at U of T, along with colleagues in New York and Japan, have discovered.

“This gene – Fkbp6 – is a member of a family of genes that have been implicated in immunosuppression and heart disease,” says Dr. Josef Penninger, professor of medical biophysics and immunology at U of T and senior author of a new paper in the May 23 issue of Science. “That this gene would control male fertility was completely unexpected. We originally thought Fkbp6 was important for heart function but the only place we could find it was in sperm and oocytes.”

Penninger and post-doctoral fellow Michael Crackower made the surprising discovery when they eliminated the Fkbp6 gene in genetically engineered mice. When the gene was removed, the oocytes (cells in the early phases of egg development) in female mice appeared normal but all the sperm cells in males had died, resulting in complete infertility. Penninger and Crackower realized their work bore striking similarities to some research by Japanese scientists who, over the past decade, have been studying a naturally occurring mutation in rats that also caused aspermia (lack of sperm). The U of T researchers recognized that the genetic mutation in their mice was similar to the spontaneous mutation seen in the rats.

Penninger and Crackower studied the cells and tissue and found that the mice completely lacked spermatids, the male germ cells which eventually develop into spermatozoa, an elemental part of semen. The deletion of the Fkbp6 gene was isolated as the cause for the infertility in mice.

It has been estimated that 15 per cent of couples around the world remain childless because of infertility but few genetic causes have been identified. However, Penninger says, given the mice and rat data, it would be interesting to test whether mutations in the Fkbp6 gene also account for human infertility.

He and his team started this work three years ago looking at heart disease, thinking that Fkbp6 would have a primary role in heart function. “We found no link between this gene and heart disease but we did find that our male mice were unable to breed. When we investigated further, we found that the size of the testes of our mice were massively reduced and that they produced no sperm cells,” he recalls.

“Fkbp6 only acts in sperm cells and we found no other defects in our mice besides sex-specific male infertility. While our male mice showed normal sexual behavior and had normal levels of sex hormones, they completely lacked sperm cells. So it’s possible that Fkbp6 might be the perfect target for the development of a male birth control pill.”

As an additional finding, the researchers say the Fkbp6 gene plays a fundamental role in the normal life of chromosomes in sperm cells. Penninger’s group found that Fkbp6 is part of the protein complex that binds maternal and paternal chromosomes in oocytes and sperm cells, a process carried out by meiosis. Meiosis occurs in all sexually reproducing species and allows the genetic exchange between maternal and paternal genomes.

In normal life, each chromosome partners with a chromosome of corresponding structure, position and origin. Penninger and his fellow researchers found that when the Fkbp6 gene was removed from the mice, the chromosomes were unable to identify their correct partners and, instead, paired with non-corresponding chromosomes. Defects in chromosome alignment or genome segregation in germ cells can result in aneuploidies, where subjects carry chromosomes above or below the normal chromosome number. Aneuploidy is a leading cause of spontaneous miscarriages in humans and a trait in many human cancer cells.

The research was funded by the Natural Sciences and Engineering Research Council of Canada, the Institute of Molecular Biotechnology of the Austrian Academy of Sciences, the Canada Research Chair program, the Canadian Institutes of Health Research and the Albert Einstein College of Medicine in Bronx, N.Y.