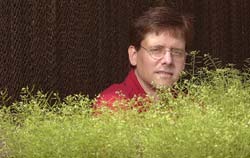 Research conducted at Purdue University by Matt Jenks with Arabidopsis plants may lead to the development of more drought-resistant plants. Jenks is an assistant professor of horticulture. (Purdue Agricultural Communication photo/Tom Campbell) <br>

The identification and duplication of a gene that controls production of plants’ outermost protective coating may allow Purdue University researchers to create crops with increased drought resistance.

Scientists cloned the gene WAX2 after they discovered a fast-wilting mutant of Arabidopsis, a commonly used experimental plant. The gene is directly associated with the synthesis of the protective layer of plants, called the cuticle, and its contained waxes, according to the study published in the May issue of The Plant Cell.

The difference in the mutant Arabidopsis when compared to a wild-type, or normal, plant is the plants’ ability to retain water. This is apparently because the mutation, called wax2, has a different cuticle structure than found in a plant that has the normal gene, WAX2.

“If we can alter the expression of the WAX2 gene, we might be able to produce a cuticle that is thicker or more rigid so that it’s less permeable to water loss,” said Matt Jenks, associate professor of horticulture and landscape architecture.

Manipulating what the gene does or when it is turned on could result in plants better able to survive in arid conditions.

Jenks and his research team isolated more than 20 mutant Arabidopsis plants that showed alterations in the amount of wax they produced. Of these, only a few lost water more quickly than the wild type.

“The mutant wax2 was the most drought susceptible,” Jenks said. “Unlike previously described wax mutants, removal of the WAX2 gene product causes dramatic alteration in the cuticle membrane, and the plant no longer is able to prevent water loss.”

“It’s likely that the cuticle meshwork is disrupted so the wax molecules no longer stack properly within the cuticle,” he said. “The plant becomes very permeable to water and overall is less able to withstand drought conditions.”

The study using the mutant wax2 also revealed unique interactions between the cuticle and other aspects of plant development.

The researchers found that the wax2 mutant has fewer stomata, the small holes in the plant’s surface that regulate water loss. This mutant also has a male sterility problem that prevents pollen from activating the stigma, where reproduction begins.

“The cloning of WAX2 is providing evidence that lipids in the cuticle may serve as signals that control how plants develop,” Jenks said. “Lipids in animals are known to play important roles in regulating development, but lipid signaling in plants is not well understood.”

“We want to understand the genetics and biochemistry of plant cuticle production so that ultimately we may be able to modify economically important crops to grow better during drought” he said.

The other authors of the study are postdoctoral student Xinbo Chen, visiting professor Xionglun Liu, and graduate students S. Mark Goodwin and Virginia Boroff, all of the Purdue Department of Horticulture and Landscape Architecture.

The U.S. Department of Agriculture National Research Initiative and Purdue University provided support for the research.