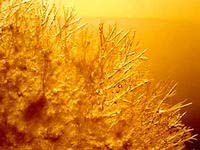 New knowledge will provide insight into organisms important to agriculture, medicine, the environment and commerce

In the April 24, 2003, issue of the journal Nature, scientists, including UC Riverside’s Katherine A. Borkovich, assistant professor in the department of plant pathology, and her postdoctoral fellow, Svetlana Krystofova, present the entire list of genes found in the Neurospora genome. (A genome is all the DNA in an organism, including its genes.) The scientists’ analysis promises many new insights into a variety of cellular processes, including environmental sensing, biological clocks, growth and development.

“Knowledge of the genes present in Neurospora will accelerate the analysis of both Neurospora and related fungal species,” said Borkovich. “The genome sequence of the model system Neurospora provides a molecular insight into a large group of organisms important to agriculture, medicine, the environment and commerce.”

Economic benefits of the research will emanate from the discovery of new targets for control of plant and animal pathogens and from the harnessing of filamentous fungi for the production of novel antibiotics and other secondary metabolites.

Neurospora, commonly known as the orange bread mold, was first described during an infestation of French bakeries in 1843. Domesticated as an experimental organism in the 1920s, Neurospora has been an important model system from that time until today.

“Neurospora is extremely tractable genetically and has been an important research organism for much of the last century,” said Borkovich. “For example, the 1958 Nobel Prize winning work of George Beadle and Edward Tatum, which linked together the disciplines of genetics and biochemistry, or genes and proteins, was performed using Neurospora.”

The natural habitat of Neurospora was originally thought to be limited to tropical and subtropical regions of the world. But wild isolates of Neurospora have been found in the temperate forests of North America in recent years. Neurospora sexual spores are well-known for their ability to germinate after a forest fire; the resulting colony then utilizes the burnt plant matter as a food source. For this reason, Neurospora can be seen growing in burnt sugar cane fields in hot and humid regions of the world.

Borkovich was involved in the genome analysis project with the Whitehead Institute Center for Genome Research (WICGR) in Cambridge, Mass. “I organized a group of Neurospora scientists from several institutions to analyze the large number of genes involved in growth and development,” she said. “The data collected during the analysis phase has been archived and will form the basis of a detailed gene database at the WICGR.”

The authors of the Nature paper determined the entire ~40 million basepair sequence of the genome of the filamentous fungus Neurospora. The genome sequence predicts about 10,000 genes, only 25% fewer than that found in the fruit fly Drosophila (14,000 genes) and 50% that of low estimates for the number of genes in humans. The Neurospora sequence is the first for a filamentous fungus and only the third fungal genome sequence that has been determined. The other two sequenced genomes, those of the yeasts Saccharomyces cerevisiae and Schizosaccharomyces pombe, are only about one-half the size of Neurospora.

Borkovich noted that the number of closely-related genes in the Neurospora genome is much lower than predicted from the genome size. “This likely results from the action of a phenomenon termed Repeat-Induced Point mutation or RIP,” she explained. RIP is a process that mutates duplicated genes during the sexual cycle in Neurospora, and is thought to provide a defense mechanism to destroy foreign DNA, such as that from invading viruses.

“The impact of Repeat-Induced Point mutation on the genome sequence is important, as it provides a tool to study evolution in an organism that cannot evolve new genes by gene duplication,” Borkovich said.

The Department of Plant Pathology at the University of California, Riverside is committed to conducting research on the basic biology of plant pathogens; developing methods for the control of plant diseases; providing a quality education to its students; and, providing expert advice on plant diseases to the citizens of California and the world. The department has its roots in the Citrus Experiment Station, which was established in Riverside in 1906. Although the department has maintained a strength in the study of diseases of citrus, the interests of the faculty have expanded and now full-fledged programs also exist in the diseases of field crops, vegetables, ornamental plants, turfgrass, and subtropical trees.