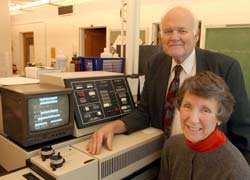 D. James and Dorothy Morré in a Purdue University laboratory. The husband-and-wife team has discovered a protein that is responsible for setting the length of periods of activity and inactivity within cells in the body, acting as a biological clock. The research, which appears in the journal Biochemistry, is the culmination of four decades of work by James Morré. (Purdue News Service Photo/David Umberger) <br>

The biological clock – timekeeper for virtually every activity within living things, from sleep patterns to respiration – is a single protein, Purdue University researchers report.

The husband and wife team of D. James and Dorothy Morré has discovered this protein, which is responsible for setting the length of periods of activity and inactivity within cells. If the protein is altered, an organism’s body will experience “days” of different length – ranging from 22 to 42 hours in length in some cases. The discovery could have far-reaching implications for medicine.

“We can now begin to understand the complex chain of events that connect the clock to events in the body,” said James Morré;, Dow Distinguished Professor of Medicinal Chemistry in Purdue’s School of Pharmacy and Pharmacal Sciences. “Since the clock affects nearly every bodily activity, this discovery holds myriad potential applications, from minimizing jet lag to determining when best to administer cancer drugs.”

The research, which appears in the journal Biochemistry, is the culmination of four decades of work and a lifelong fascination of James Morré.

“I first set out to find the source of the biological clock in 1962, when I was still a student,” he said. “Back then the question was the subject of perennial and lively scientific debate. Theories abounded as to why the body was able to keep its own rhythm – some thought it was bound up in cellular chemistry, but others thought it could be influenced by anything from the lunar cycle to sunspots. No one could prove anything conclusively, though, so the physicists had a field day arguing about it.”

The argument was more than just an intellectual exercise. Even in the early 1960s, scientists knew that cancer patients and the elderly often experienced disorders thought to be related to the biological clock. As time passed, it also became clear that astronauts suffered bone loss and muscle wastage due, in part, to space travel’s effects on their internal clocks, and air travelers began experiencing the clock-related ailment of jet lag.

“We knew little for certain,” he said. “But I always thought a better understanding of life’s processes would result if we knew what made them tick.”

One biological clue to the puzzle was discovered in the 1960s. Heavy water – water made of two atoms of deuterium, the isotope of hydrogen with an extra neutron in its nucleus – could alter the clock to run on a 27-hour day.

“Lots of heavy water was available back then, as it was needed for nuclear reactors,” he said. “Investigators discovered that if you fed cells heavy water, they would operate on a 27-hour day. It was a clue that the clock had a biochemical basis, but heavy water’s effect was almost forgotten as other explanations for the clock gained favor.”

Forty years passed. Morré spent time on other projects, but the biological clock never escaped his mind or efforts completely. Then an examination of how cells grow led him to the discovery.

The Morrés found that cells increase in size at a periodic rate – they enlarge themselves for 12 minutes, then rest for 12 before growing again. The complex interaction of proteins is the basis for many activities within cells, and James Morré theorized that some undiscovered proteins were responsible for the 24-minute growth cycle.

The discovery came when the team found that a single cylinder-shaped protein molecule with a unique characteristic regulated the cell enlargement cycle. This particular protein had two activities: one served as a catalyst for growth activities for 12 minutes and then rested while its other activity took over for the next 12 minutes.

“Our model is that of a Janus-head protein with two opposing faces,” he said. “One ’face’ handles cell enlargement. Then the protein ’flips over,’ allowing the second face to carry out other activities while cell enlargement rests. While two functions from a single protein had been seen before, what is totally unique here is that these activities alternate, and with very precise timing. The activities don’t both run all the time, but instead alternate to generate the 24-minute period length.”

To confirm that the protein was responsible not just for regulating growth but for all activities set by the biological clock, Pin-Ju Chueh, then a microbiology graduate student in Dorothy Morré’s lab, isolated the gene which produced the protein within cells. The team then cloned the protein and altered it in ways that produced different period lengths.

“We found that we could produce clocks with cycles of between 22 and 42 minutes,” James Morré said. “The ’day’ which the cell experienced was precisely 60 times the period length of the protein’s cycle. We even found that feeding cells heavy water gave them a 27-minute cycle of growth and rest, so that old piece of information served to confirm our theory.”

Morré said the discovery could be applied to a great number of biological issues.

“Now we have an opportunity to tell how organisms tell time,” said Dorothy Morré;, professor of foods and nutrition in Purdue’s School of Consumer and Family Sciences. “This could give us new insights into cellular activity, such as cholesterol synthesis, respiration, heart rhythms, response to drugs, sleep, alertness – there’s so much.”

While it is presently difficult to make the biological clock speed up or slow down, it can be reset, a fact which could assist the sleep-deprived.

“This discovery also affords an opportunity to improve our methods of clock setting, from minimizing jet lag to correcting sleep disorders,” he said. “We might even be able to develop simple artificial clock-setting environments to aid astronauts and those living near the Arctic Circle, where day-night cycles are absent for long periods.”

While the research could be applied to many disorders, the newly discovered protein first needs further attention.

“It is very difficult to look at the protein,” James Morré said. “Usually with unknown proteins you can crystallize them and then examine them with a high-energy X-ray beam, but this one can’t be crystallized because it’s constantly moving. A better picture of the protein switching back and forth would greatly assist future practical applications of the discovery.”

This research was sponsored in part by NASA, the National Institutes of Health and the Purdue Botanicals Center.

James Morré is a member of the Purdue Cancer Center, one of eight National Cancer Institute-designated basic-research cancer centers in the United States. Established in 1976, the center is committed to helping cancer patients by identifying new molecular targets and designing future agents and drugs for effectively detecting and treating cancer.

Both are members of the Purdue-UAB Botanicals Center, which in collaboration with the University of Alabama-Birmingham, promotes interdisciplinary botanicals research for the prevention of age-related diseases. The center has received support from the National Institutes of Health to study compounds in botanicals purported to reduce the risk of cancer, osteoporosis, cardiovascular disease, cognitive function and other age-related diseases. The Purdue-UAB Botanicals Center is one of four NIH-funded Botanicals Research Centers in the United States.

Biochemical Basis for the Biological Clock

NADH oxidases at the external surface of plant and animal cells (ECTO-NOX proteins) exhibit stable and recurring patterns of oscillations with potentially clock-related, entrainable, and temperature-compensated period lengths of 24 min. To determine if ECTO-NOX proteins might represent the ultradian time keepers (pacemakers) of the biological clock, COS cells were transfected with cDNAs encoding tNOX proteins having a period length of 22 min or with C575A or C558A cysteine to alanine replacements having period lengths of 36 or 42 min. Here we demonstrate that such transfectants exhibited 22, 36, or 40 to 42 h circadian patterns in the activity of glyceraldehyde-3-phosphate dehydrogenase, a common clock-regulated protein, in addition to the endogenous 24 h circadian period length. The fact that the expression of a single oscillatory ECTO-NOX protein determines the period length of a circadian biochemical marker (60 X the ECTO-NOX period length) provides compelling evidence that ECTO-NOX proteins are the biochemical ultradian drivers of the cellular biological clock.