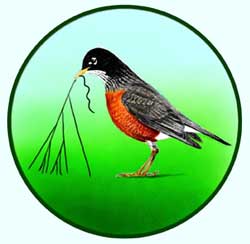 This “Early Bird” gets more than a worm <br> <br>The early bird in this picture has found a cladogram, or a branching diagram that shows the evolutionary relationships between different groups of animals. “Early Bird” is a project recently funded by the National Science Foundation as part of a massive effort to map the Tree of Life. It will help determine how major groups of birds are related to each other – as well as to all living things. <br>Information about evolutionary relationships has helped scientists focus research; track the origin and spread of diseases; develop new medicines and agrochemical products; conserve species; and restore ecosystems, according to Shannon Hackett, PhD, Field Museum assistant curator of birds and an Early Bird principal investigator. <br> <br>Illustration by M. Skakuj, Courtesy of The Field Museum <br>

An ambitious, multi-disciplinary, 15-20 year program to fill in and flesh out the Tree of Life has just been launched by the National Science Foundation.
Field Museum scientists will help lead three of the seven grants recently awarded to researchers around the world to construct a new framework for understanding the evolutionary relationships between all species, extinct and living.

These three projects (listed below) will focus on birds, spiders, and archosaurs (birds, dinosaurs, pterosaurs and crocodiles). They represent more than half the $12 million that NSF awarded for the first year of the Assembling the Tree of Life (AToL) program.

Darwin’s inspired vision of a grand Tree of Life “with its ever-branching and beautiful ramifications” has challenged scientists for generations. He speculated that all life forms – from the smallest microorganism to the largest vertebrate – are genetically related in a vast evolutionary tree. The tree imagery has prompted scientists to classify all organisms into groups and discern patterns of evolutionary and historical relationships that explain the similarities and differences between them.

Today, many branches of the Tree of Life remain unanalyzed, even unknown. AToL will address this problem, incorporating the flood of new information from genetic studies, fieldwork discoveries, and inventories of the earth’s biota with existing information.

“Progress in many research areas, from genomics to evolution, is being encumbered by the lack of a rigorous framework of evolutionary relationships,” says Shannon Hackett, PhD, Field Museum assistant curator of birds and AToL investigator. “The conceptual, computational and technological tools are now available to resolve most, if not all, major branches of the Tree of Life.”

Programs in which Field Museum scientists will participate

Early Bird will determine the evolutionary relationships among major groups of birds. These relationships will serve as a comparative framework with which to organize and understand the vast amount of information already available on avian ecology, evolution, physiology and behavior.

The project will generate large amounts of DNA sequence data for all major avian lineages (approximately 20,000 base pairs for 500 species). A rapidly expanding suite of computational tools will be used to analyze this evidence and determine patterns and evolutionary relationships. The data will be made accessible to other researchers and the general public through a website with progress reports and interactive educational tools.

The impact of this project on science and society will be far reaching, says Hackett, a principal investigator on Early Bird: “Birds are among the most prominent and engaging creatures in most ecosystems. They have been the subject of an extraordinary number and diversity of scientific studies that figure largely in our understanding of the natural world and humanity’s place in it.

“Birds’ position high in many food chains, together with their great mobility, makes them sensitive indicators of environmental quality,” she adds. “Furthermore, the monitoring of bird populations is widely used to set conservation and management priorities.”

Phylogeny is the study of the evolution of a genetically related group of organisms. This project will produce a map of the deepest branches of evolutionary relationships between spiders by combining a massive amount of newly generated comparative genomic data with new and re-assessed data on morphology and behavior.

Spiders are among the oldest and most diverse groups of organisms, with fossils dating back 380 million years and a current diversity of more than 37,500 described species. Without spiders, insect pest populations would soar, and humans would be greatly affected.

“We’ll sequence the DNA of representative samples of at least 500 spiders, and also assemble morphological and behavioral data on those same spiders,” says Field Museum assistant curator of insects Petra Sierwald, PhD, and a principal investigator on this project. “Then we’ll combine and analyze the resulting large data matrices using new computer software, designed in large part by members of the group.”

Partners include several American museums and universities (American Museum of Natural History, The Field Museum, George Washington University and Smithsonian National Natural History Museum and others), as well as institutions in Denmark, Spain and Argentina.

This project will attempt to uncover the evolutionary patterns among archosaurs, focusing on theropods. Archosaurs vary tremendously, from marine crocodiles to bipedal, flying birds.

“They’re arguably the most dominant group of terrestrial vertebrates from the Triassic to the present and have a well-sampled fossil record,” says Field Museum assistant curator of dinosaurs Peter Makovicky, PhD, and a principal investigator on this project.

Nevertheless, few have studied the relationships within the major groups of archosaurs. Many tantalizing questions – such as the exact origin of modern birds – remain to be answered.

Working with Early Bird, scientists will create a survey of molecular and morphological data. This will form the core of an interactive online database of systematics data, images of characters and organisms, literature, and links to other databases. Morphological and molecular data from specimens housed in collections around the world will be compiled into this supermatrix.