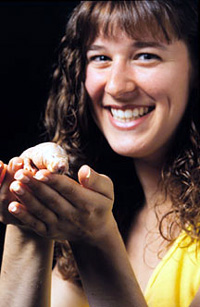 RESPECT FOR AN ELDER. Twenty-one-year-old Dara Neuman, a senior majoring in biology in Cornell’s College of Arts and Sciences, displays a naked mole-rat that was born years before she was. The extreme longevity of the rodents is said to help confirm the evolutionary theory of senescence <br>Cornell University Photography <br><a href=http://www.news.cornell.edu/Utilities/Copyright.html target=extern>Copyright © Cornell University</a>

The resemblance is more than coincidence. They really are really old males — and females, too — biologists report in an article scheduled for November publication in the Journal of Zoology (Vol. 258, Part 3). Many naked mole-rats (Heterocephalus glaber) in laboratory colonies in the United States and South Africa have lived more than 20 years, and some are at least 26 years old, making them by far the oldest small rodents in captivity.

That distinction won’t get them birthday greetings from the president. But their species is being hailed as a perfect exemplar for the evolutionary theory of senescence (or aging), which explains why some bodies wear out before others. Senescence theory also tries to explain, for example, why gerbils live only a couple of years, humans regularly live eight to nine decades and redwood trees for millennia.

“Whatever kind of organism it is, it’s going to senesce,” says Paul Sherman, a professor of neurobiology and behavior at Cornell University. “Of course, good food and exercise, proper medical care and avoiding risky behaviors may extend lives a bit. But nothing we can do in our lifetimes or many more to come is likely to stop senescence.” Evolutionary biologists define the term as the persistent decline in fitness components with age, due to internal physiological deterioration.

Evolutionary biologists agree there are two types of causes for the end of life. The proximate (or immediate) cause, such as drowning or essential body parts wearing out, gets reported in newspaper obituaries, whereas the ultimate (or long-term) cause, the genetic explanation for death, gets discussed in scholarly scientific papers, and Sherman offers this explanation for the difference:

“Most people attribute aging solely to wear-and-tear on individuals’ bodies. We know about oxidative damage to DNA and cells, so we tend to say things like, ’He died because his heart failed.’ True, that’s the proximate cause of death, but it doesn’t explain why a person’s heart lasted much longer than a gerbil’s heart. Senescence theory does: Long before a particular man or gerbil was born, natural selection had acted on the genomes of their species to cause gerbils’ bodies to senesce more rapidly than humans’ bodies.

“Proximate and ultimate explanations for senescence are not alternative, they are complementary,” Sherman adds. “The first identifies specific physiological mechanisms whose breakdown results in senescence. The second explains how natural selection has acted to maintain or fail to maintain those mechanisms.”

The Cornell researcher has studied colonies of naked mole-rats living in transparent plastic tunnel systems in his laboratory since 1979, first at the University of California-Berkeley and then in Ithaca. Jarvis has done the same for her mole-rats at the University of Cape Town. The animal-care protocols they pioneered have helped zookeepers worldwide to display the intriguing creatures for the education of the general public.

In nature, naked mole-rats are known to live at least 10 years. “We think they live longer in the laboratory than they do in the wild because they’re safer here, but they’re pretty safe in nature, too,” Sherman says. One of the factors contributing to the evolution of longer life spans is reduced extrinsic mortality, which Sherman defines as causes of death that are outside an animal’s control, such as drowning in a flash flood or being devoured by a snake. In nature, naked mole-rats are largely protected from sources of extrinsic mortality by inhabiting subterranean burrows in extremely hard soils. Protection is enhanced by cooperative defense against predators. As a result, naked mole-rats have evolved genetic traits that make them more resistant to senescence than similar-sized, solitary, surface-dwelling rodents. Indeed, the only rodent known to live as long as the naked mole-rat is the African porcupine Hystrix brachyura , which is protected by its large body size and quills.

The diminutive naked mole-rat has something else going for it: greater fecundity with advancing age. “A large, old breeding female mole-rat gives birth to an incredible number of young and continues to do so year after year,” Sherman says. “Our record for a laboratory female is 28 pups in one litter and more than 900 pups in a lifetime.” Fecundity seems related to body size, Sherman adds, noting that mole-rat queens, like queens in honeybees and termites, are considerably larger than workers in their colonies. Fecundity is important because if old individuals can make disproportionate reproductive contributions, there will be strong selection to postpone senescence.

While naked mole-rats are models that support senescence theory, they are not perfect role models for humans. Senescence occurs, simultaneously, on all aspects of any organism, which means there is no single gene for aging or for youth. “Senescence theory,” says Sherman, “tells us why the fountain of youth still eludes us — and probably always will.”