Home / Life Sciences and Chemistry / The recombination of chromosomes: a controlled game of love and chance?
22.10.2002

The recombination of chromosomes: a controlled game of love and chance? 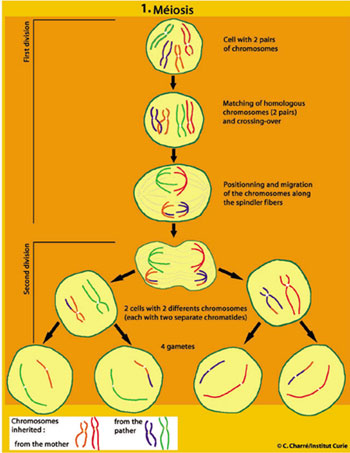 Sexual reproduction has many advantages — some most pleasurable — and probably leads to the long-term survival of the species concerned. During the formation of reproductive cells or gametes, sexual reproduction is accompanied by an exchange of genes between the two chromosomes inherited from the parents. Each individual arising from these gametes thus receives a veritable mosaic of parental and grandparental characteristics, and so at one and the same time resembles and differs from the parents.

The complex cellular and molecular events underlying this shuffling, or “recombination”, of the genetic information are far from completely elucidated. CNRS research scientists at the Institut Curie have recently cast light on these mechanisms by showing that, in the yeast Saccharomyces cerevisiae, a protein chimera (Gal4-Spo11) strongly stimulates recombination in chromosomal regions that normally do not “recombine”.

This discovery, published in the October 18, 2002 issue of Cell, has led to the development of a method, for which a patent application has been made, which henceforth allows scientists to stimulate and “target” in vivo recombination at specific sites on the chromosomes, near one or other gene. This could prove valuable in dissociating and hence in isolating those stretches of the chromosomes that are generally transmitted to progeny as a single unit. This method may also be used to investigate the causes of chromosomal disorders and sterility due to anomalies in recombination.

Scientists have been exploring the intricacies of the recombination of genetic characteristics since the early 20th century. At that time, they were interested in generation-to-generation transmission of linked characteristics: petal color and pollen grain shape in plants; eye color and wing size in the fruit fly Drosophila. Usually, the progeny’s characteristics were identical to those of their parents, but every so often one offspring inherited petal color from the mother and pollen grain shape from the father, or vice versa. Clearly, the genes had been shuffled. Theory and experiment on model organisms (peas, flies, mice and yeasts) gradually revealed the sequence of events, down to the molecular level.

When reproduction rhymes with diversity

Widespread use of photography and photocopying has familiarized us with the reproduction of identical copies. This happens in nature too, notably when a cell divides and multiplies. Through a process called mitosis, the cells produce daughter cells identical to the “mother” and to each other. So, all the cells in our body carry the same genetic material (chromosomes), apart from a few exceptions such as gametes, antibody-producing cells, and also, unfortunately, tumor cells.

Sexual reproduction, on the other hand, begins so to speak with a “reduction” of the parental genetic material through meiosis, a cell division specific to eukaryotes.

Meiosis occurs during the formation of reproductive cells, that is gametogenesis (spermatogenesis or oogenesis).

In meiosis (from the Greek, meaning reduction), unlike mitosis, the genetic material is halved when transmitted from the mother cell to the daughter cells: 2n chromosomes (diploid cell) become n chromosomes (haploid cell).

This reduction is indispensable, since the two haploid gametes may subsequently fuse to form a fertilized diploid (maternal n + paternal n) egg (zygote) which will become the embryo, and the adult.

A double shuffling of the genes

Recombination occurs right at the beginning of meiosis. Split into two chromatids, the chromosomes form homologous pairs, one inherited from the father and the other from the mother. They then cross over and exchange segments through genetic recombination, a mechanism which is initiated by natural breaks in the DNA molecule and is followed by repair. In a gamete, on a given chromosome, there are genes inherited from both the father and mother (see illustration). The number of exchanges will vary from one organism or chromosome to another (on average, one to five per chromosome, and up to one hundred or so per cell).

This initial shuffling of the genes is followed by a random distribution of chromosomes at the next stage of meiosis. Each pair of chromosomes — one of paternal origin, the other maternal — is positioned independently of the other pairs on the equatorial plate, before migrating to the poles to produce two daughter cells. The second meiotic division then gives rise to four haploid daughter cells by separation of chromatids.

These multiple genetic shufflings bestow diversity on the resulting populations and therefore increase the probability that individuals will have a combination of favorable genes, enabling them to adapt to a changing environment.

The pioneers of genetics followed the common sense principle that if genes are physically further apart on a chromosome, there is a greater likelihood that a break and an exchange of segments, hence a recombination, will occur between them. During the last century they therefore drew “genetic” maps of the genomes, including that of man, by measuring the frequencies of recombination in the progeny. This allowed them to localize and arrange the genes along the chromosomes and so to calculate their genetic distances.

Over the last decade, dazzling advances in the techniques of DNA, and hence genome sequencing (the first genome fully sequenced was that of yeast, in 1996I) have allowed physical maps of genomes to be drawn. It subsequently became apparent that, for a given unit of physical length, certain regions of the chromosomes undergo recombinations more frequently than others.

Why are there such “hotspots” and “coldspots”? And what triggers recombination?

Alain Nicolas and his team II have been studying these questions for several years, using the yeast model Saccharomyces cerevisiae. The sexual life of this yeast is not, in itself, particularly fascinating. It is a unicellular, diploid organism which normally multiplies by mitosis. But its meiosis can be experimentally controlled since it is induced by nutritional deficiency. Then, a bud forms containing four haploid cells (equivalent to the gametes) produced by meiosis. These cells can fuse to reform a diploid zygote. The value of this organism to the biologist is that its numerous progeny can easily be studied.

In yeast, as in other organisms, recombination results from the formation, and repair, of breaks in the chromosomes. The factors that determine whether a specific region is susceptible to breaks – and hence to recombination – are not wholly understood, and the molecular basis of such susceptibility has yet to be fully clarified. We do know, however, that fifteen or more genes are involved. Mutation of these genes is dramatic since it leads to anomalies in chromosome recombination that are apparent either in failure to form gametes or in sterility of the gametes formed. Crossing over normally allows homologous chromosomes to remain together during the first phases. This link and the resulting tension are then used by the cellular machinery to separate the homologous chromosomes and to move each of them independently towards one of the two poles of the cell. When there are anomalies, the two homologous chromosomes may remain linked to each other, and thus migrate to the same pole and end up in the same gamete (cause of trisomy 21, or Down syndrome, for example).

A chimera that “breaks” DNA and stimulates recombination

A few years ago, Alain Nicolas and his team at the Institut Curie, in collaboration with the group of Patrick Forterre (CNRS-Orsay), showed that the protein Spo11 induces breaks in the hotspots of the genome of S. cerevisiae.

The originality of the work published today is that this time the researchers have artificially associated a “vehicle” with Spo11, enabling it to “break” the chromosomes and stimulate recombination even in coldspots. This vehicle is part of Gal4, a protein which normally binds to specific sequences of the DNA to trigger gene expression.

The Gal4-Spo11 chimera induces breaks in the chromosomes near all the natural sites of Gal4 binding to DNA. Although other proteins are generally required for the formation of chromosome breaks, here the addition of this chimera to the meiotic cell suffices, and in no way perturbs the natural events triggered by Spo11 alone.

Spo11, a key actor in recombination in all organisms

This is the first time that a method has been developed which allows the molecular machinery controlling the natural recombination of chromosomes to be directed towards a target in a coldspot. As Spo11 is highly conserved in all organisms, this principle could be adapted to other species by making use of their own Spo11. A patent has, moreover, been taken out for the application of this method to various model organisms: Arabidopsis for plants, the fruit fly Drosophila for invertebrates, the mouse for mammals.

This paves the way for interesting applications, notably the study of certain types of sterility and chromosomal disorders. It will also be possible to enhance the control of gene combinations in animal models of cancers and diseases involving several genes (polygenic diseases). It may be difficult in animal models to determine the exact role of certain genes, especially if they are always transmitted to the progeny together. Our understanding of the relations between genes would be heightened if we could separate, or conversely combine, genes by recombination.