How a master protein remodels chromosomes to orchestrate gene expression 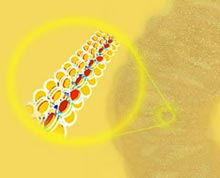 DNA winds around histone proteins to form nucleosomes; the string of nucleosomes is coiled into fibers, and the fibers are folded into chromatin loops. Such extreme compactification makes gene regulation an intricate process

A team led by Terumi Kohwi-Shigematsu of Lawrence Berkeley National Laboratory’s Life Sciences Division has demonstrated that SATB1, a protein crucial to the development of the immune system, works by forming a network in the cell nucleus, attaching chromatin to the network structure at specific sites, and orchestrating remodeling of the chromatin over long distances to regulate gene expression.

“SATB1 determines when and how the genes are read — when they are activated and when they are repressed,” says Kohwi-Shigematsu. “We have shown that SATB1 regulates gene transcription by functioning as a ’landing platform’ for several chromatin remodeling enzymes, which operate within large but well defined domains.”

In the 10 October 2002 issue of Nature, the researchers report that, in thymocytes, SATB1 regulates the interleukin-2 receptor-alpha gene, IL-2Ra, by bringing specific chromatin and nucleosome remodeling enzymes directly to the gene site, and by directing nucleosome positioning over 7,000 base-pairs away.

Pluses and minuses of packed DNA

Chromatin is the complex of DNA and proteins in the nucleus of the cell. It consists of DNA wound like thread around groups of histone proteins to form bead-like nucleosomes; this string of nucleosomes is coiled into fibers 30 nanometers (billionths of a meter) thick, and the fibers are folded into chromatin loops, further compacting the DNA. Thus a eukaryotic cell can pack the entire genome of the organism, well over a meter of DNA, into a nucleus only a few millionths of a meter across.

Many orders of chromatin folding are necessary to fit the genome into a small nucleus, and this complicates the process of gene expression. For a gene to be transcribed, the double-stranded DNA that encodes it has to be unzipped — hard to do inside tightly wound chromatin. So gene expression depends on molecular machines that rearrange the chromatin, repositioning nucleosomes along the DNA fibers.

A decade ago Kohwi-Shigematsu and her husband, Yoshinori Kohwi, also in Berkeley Lab’s Life Sciences Division, discovered short “base unpairing regions,” BURs, inside longer, previously identified chromosomal “matrix attachment regions” (MARs), lengths of chromatin rich in the DNA bases adenine and thymine (A and T). The DNA bases in BURs unpair easily when there is negative tension on the DNA helix; very short core regions in BURs resist pairing at all.

“We reasoned that if these regions were biologically important, there must be an important protein associated with them,” says Kohwi-Shigematsu. In a large protein array, using cloned BURs as probes, they isolated the protein they named “special AT-rich binding protein 1,” SATB1.

SATB1 does not bind to exposed DNA bases; instead, it binds along the minor groove of double-stranded DNA, where there are well mixed As, Ts, and Cs (cytosine bases) on one strand. While some other proteins, which occur in many cell types, also bind to BURs, SATB1 is cell-type specific; it is found principally in thymocytes, the precursors of T cells. Ubiquitous BUR-binding proteins have little affect on chromatin organization in thymocytes, so Kohwi-Shigematsu and her colleagues were able to examine how SATB1 interacts with chromatin in a specific type of cell.

In healthy organisms thymocytes are the precursors of the immune system’s T cells — both killer T cells, which attack foreign organisms and diseased cells directly, and helper T cells, which emit proteins like interleukin 2 that help identify targets, stimulate the defense, and aid in the attack. CD8 and CD4 are cell-surface markers that differentiate the two types early in the developmental process.

During the “double positive” stage of thymocyte development the future T cells exhibit both these markers. Initially they proliferate, but are winnowed as they mature into “single positive” CD4 helper T cells or CD8 killer T cells.

Early in 2000, Kohwi-Shigematsu and her coworkers reported studies using “knockout” mice bred with no gene for SATB1, thus no SATB1 protein. The SATB1-null mice exhibited unusual reflexive behaviors. Their thymus, spleen, and lymph nodes were markedly smaller than normal. They were small and thin and lived only three weeks; “wild-type” mice live two years or more.

Lack of SATB1 wrecked the immune system of the knockout mice. Very few thymocytes were produced to begin with, and those that progressed to the crucial double-positive stage inappropriately expressed receptors and markers. In normal double-positive thymocytes, for example, the interleukin-2 receptor-alpha gene is repressed, but the knockout mice expressed IL-2Ra ectopically, literally “out of place.”

The few thymocytes that survived to maturity expressed proteins that should normally be repressed. Moreover, in SATB1-null mice, the signals that activate T cells instead caused them to die off through apoptosis (programmed cell death). Runaway apoptosis, not only of thymocytes but of other kinds of progenitor cells as well, is what may have killed the knockout mice at the end of their short lives.

“In the absence of SATB1, hundreds of genes are dysregulated in thymocytes,” says Kohwi-Shigematsu. In fact, SATB1, specialized as it is, appears to regulate up to two percent of all the genes in the mouse genome.

Deploying the machinery of gene regulation

In the work reported in the October 10 Nature, and in related work submitted for publication, Kohwi-Shigematsu and her colleagues have shown that SATB1 forms a physical network inside the nucleus of thymocytes and other developmental cells, binding the chromatin loops at specific loci affecting crucial genes. SATB1 is not just a structural protein, however. It orchestrates gene expression by remodeling chromatin as necessary.

Through DNA-affinity chromatography, chromatin immunoprecipitation, and other techniques, the researchers found that SATB1 directs enzymes that remodel chromatin to the site of the IL-2Ra gene and others. Among them are components of CHRAC, the “chromosome accessibility complex” that rearranges nucleosomes. SATB1 also targets another complex, the “nucleosome remodeling and histone deacetylation” (NuRD) complex, which repositions nucleosomes and modifies histones, components of nucleosomes.

Kohwi-Shigematsu’s team showed that SATB1 explicitly controls expression of the IL-2Ra gene — and others, up to many thousands of base-pairs away from the attachment site — by providing docking sites for these remodeling complexes, which alter the distribution of nucleosome arrays and activate and deactivate DNA transcription.

Thus the researchers propose SATB1 as a model for the function of other BUR-binding proteins, representing “a general guiding process by which multiple chromatin remodeling factors find entry sites into chromatin,” thereby providing “a mechanism for global gene regulation in higher eukaryotes.”

The Berkeley Lab is a U.S. Department of Energy national laboratory located in Berkeley, California. It conducts unclassified scientific research and is managed by the University of California