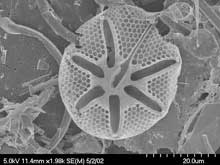 Why live in a glass house? For diatoms — tiny ocean-dwelling organisms that live in exquisitely ornate glass cases — the benefit turns out to be enormous.

In a paper published in the Sept. 13 issue of Science, Princeton scientists show that diatoms probably depend on glass to survive because the material facilitates photosynthesis. However, their study suggests that this domestic arrangement has a much bigger beneficiary: the entire planet, which owes its present-day, oxygen-rich and carbon-poor atmosphere in part to diatoms and their effective use of glass.

Diatoms are one-celled organisms that are so prolific they account for a quarter of all the photosynthesis on the planet. In photosynthesis, organisms use sunlight and carbon dioxide to make sugar and oxygen.

“These guys proliferated at a time when atmospheric carbon dioxide took a big dive” 40 to 60 million years ago, said geochemist Allen Milligan, who conducted the study in collaboration with Francois Morel, director of the Princeton Environmental Institute.

The low carbon dioxide levels, while good for us today, posed a serious problem for plant life: how to perform photosynthesis when one of the raw ingredients is in short supply. Milligan and Morel found that diatoms solved the problem by encasing themselves in glass, which has chemical properties that help them concentrate carbon dioxide inside their vessels. With this device, diatoms flourished and now play an important role in keeping carbon dioxide levels low.

Diatoms have been a source of fascination since the first microscopes of the 1600s allowed scientists to sketch their intricate glass cases in pen and ink. The tough porous shells also have a variety of commercial uses. Swimming pool owners commonly use diatomaceous earth, which is rich with old diatom shells, to filter contaminants from pool water. In the 1860s, Alfred Nobel invented dynamite by using silica from diatoms to stabilize nitroglycerine into a portable stick.

“What we didn’t know was what good this glass wall is to the diatom itself,” said Milligan.

According to Milligan and Morel’s study, the answer may have less to do with the structural properties that make diatoms useful to people than with the chemistry of silicon, a chief ingredient of glass. The researchers found that silica in the glass changes the acid-base chemistry of the water inside the shell, creating ideal conditions for one of the chemical reactions involved in photosynthesis.

By evolving this built-in reaction vessel, diatoms have had a tremendous impact, said Morel. “They are among the most successful organisms on earth.”

Scientists who are trying to map past variations in the earth’s climate, for example, might use fossil records of diatoms and other indicators to infer how carbon dioxide concentration and diatom abundance have influenced each other at different points in the past. Having a firm grasp of such historical processes has become increasingly important as scientists try to predict the effects of greenhouse gas emissions, including carbon dioxide.

The study also offers an explanation for why diatom shells are so ornate. The many pores and filigrees create a lot of surface area, exposing much more glass to water than would be the case for a smooth structure. That extra surface area might make photosynthesis more efficient for the diatom. “These are very pretty things and their beauty might in fact be related to their function,” said Morel.