Remote but remarkable: Illuminating the smallest inhabitants of the largest ocean desert 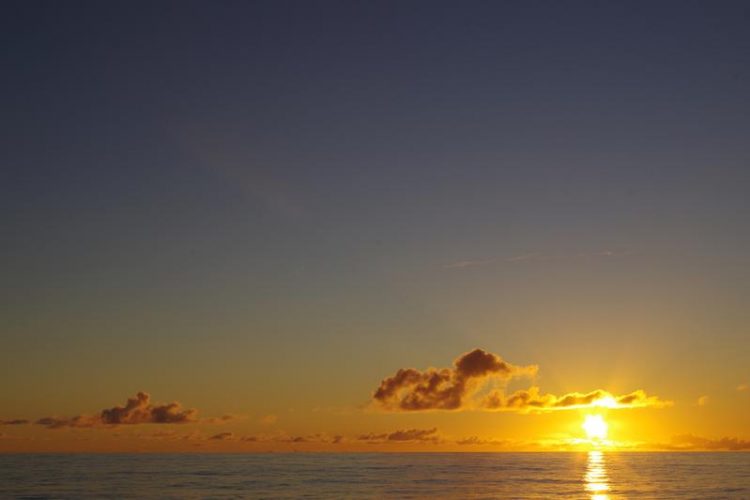 The middle of the South Pacific is as far away from land as you can possibly get. Solar irradiance is dangerously high, reaching a UV-index that is labelled ‘extreme’. There are no dust particles or inflows from the land and as a result these waters have extremely low nutrient concentrations, and thus are termed ‘ultraoligotrophic’.

Chlorophyll-containing phytoplankton (minute algae) are found only at depths greater than a hundred meters, making surface South Pacific waters the clearest in the world. Due to its remoteness and enormous size – the South Pacific Gyre covers 37 million km2 (for comparison, the US cover less than 10 million km2) –, it is also one of the least studied regions on our planet.

Despite its remoteness, both satellite and in situ measurements indicate that the microorganisms living in the waters of the South Pacific Gyre (SPG) contribute significantly to global biogeochemical cycles. Thus, the scientists from Bremen were interested in discovering which microbes are living and active in this ocean desert.

During a six-week research cruise on the German research vessel FS Sonne, organized and led by the Max Planck Institute for Marine Microbiology, Greta Reintjes, Bernhard Fuchs and Tim Ferdelman collected hundreds of samples along a 7000 kilometre track through the South Pacific Gyre from Chile to New Zealand.

The scientists sampled the microbial community at 15 Stations in water depths from 20 to more than 5000 metres, that is, from the surface all the way down to the seafloor.

“To our surprise, we found about a third less cells in South Pacific surface waters compared to ocean gyres in the Atlantic”, Bernhard Fuchs reports. “It was probably the lowest cell numbers ever measured in oceanic surface waters.” The species of microbes were mostly familiar:

”We found similar microbial groups in the SPG as in other nutrient-poor ocean regions, such as Prochlorococcus, SAR11, SAR86 and SAR116”, Fuchs continues. But there was also a surprise guest amongst the dominant groups in the well-lit surface waters: AEGEAN-169, an organism that was previously only reported in deeper waters.

Reintjes and her colleagues discovered a pronounced vertical distribution pattern of microorganisms in the SPG. “The community composition changed strongly with depth, which was directly linked to the availability of light”, Reintjes reports. Surprisingly, the dominant photosynthetic organism, Prochlorococcus, was present in rather low numbers in the uppermost waters and more frequent at 100 to 150 meters water depth. The new player in the game however, AEGEAN-169, was particularly numerous in the surface waters of the central gyre. “This indicates an interesting potential adaptation to ultraoligotrophic waters and high solar irradiance”, Reintjes points out.

“It is definitely something we will investigate further.” AEGEAN-169 has so far only been reported in water depths around 500 metres. “It is likely that there are multiple ecological species within this group and we will carry out further metagenomic studies to examine their importance in the most oligotrophic waters of the SPG.”

The current research was only possible thanks to a newly developed method that enabled the scientists to analyse samples right after collection. “We developed a novel on-board analysis pipeline”, Reintjes explains, “which delivers information on bacterial identity only 35 hours after sampling.” Usually, these analyses take many months, collecting the samples, bringing them home to the lab and analysing them there.

This pipeline combines next-generation sequencing with fluorescence in situ hybridisation and automated cell enumeration. “The outcome of our method developments is a readily applicable system for an efficient, cost-effective, field-based, comprehensive microbial community analysis”, Reintjes points out. “It allows microbial ecologists to perform more targeted sampling, thereby furthering our understanding of the diversity and metabolic capabilities of key microorganisms.”