Rare find from the deep sea 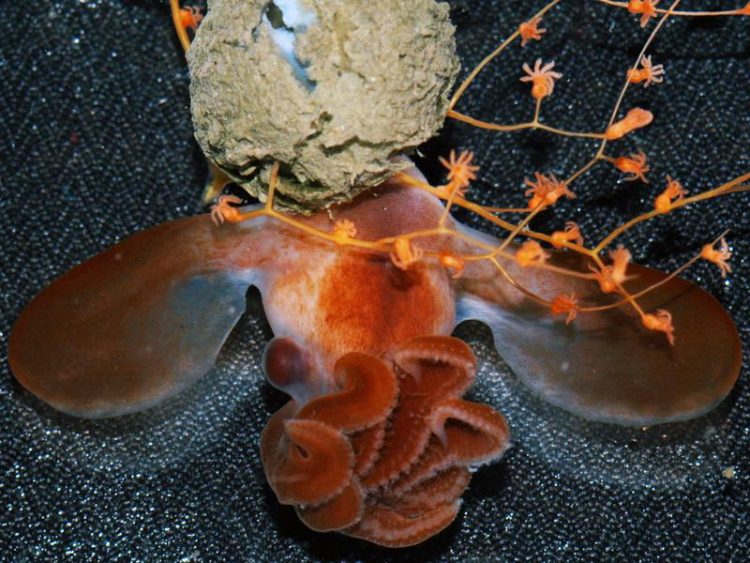 The remotely operated vehicle surfaces again, and this time it has brought up a cold-water coral from a depth of almost 2,000 meters (ca. 6,600 feet). On board the US research vessel Ronald H. Brown, the specimen is immediately placed in a container of seawater which has approximately the same temperature as the deep sea.

By chance, the biologist Dr. Tim Shank observes a small deep-sea octopus hatching from a two-centimeter egg case. The animal immediately starts moving its fins in synchrony. Dr. Shank is quick to react, films the rare event, and later preserves the small marine animal for further investigation. This happened back in 2005.

At the time, Dr. Shank, who is working at the Woods Hole Oceanographic Institution took part in an expedition exploring a chain of underwater mountains off the US East Coast, the “New England and Corner Rise Seamounts”.

“Dumbo” was borrowed from the Disney classic

“It was the first time that such a deep-sea octopus was observed directly during hatching”, says Dr. Liz Shea of the Delaware Museum of Natural History. The small animal measuring around three centimeters has fins at the end of its mantle that are shaped like elephant ears. Based on the flying elephant “Dumbo” from the Walt Disney cartoons, these deep-sea octopuses are also known as “dumbo octopuses”.

The adult females prefer to lay their eggs in the branches of deep-sea corals and then disappear. “As the video by Tim shows, the dumbo octopus immediately moves like an adult animal about ten times its size”, says Dr. Alexander Ziegler from the Institute of Evolutionary Biology and Ecology of the University of Bonn, who performed studies on the hatchling together with Dr. Shea.

Getting an inside look with magnetic resonance imaging

To find out more about this rare specimen, the team of Prof. Cornelius Faber at the University Hospital Münster took a look inside using a high-resolution magnetic resonance scanner. Dr. Ziegler then used the MRI images to create an interactive three-dimensional model of the internal organs of the small deep-sea octopus. “Particularly striking was a large yolk sac, which serves as a nutrient source directly after hatching, until the young animal can independently capture its prey in the deep sea”, explains Dr. Ziegler.

The scientists were surprised how much the structure of other internal organs and of the nervous system resembled that of adult animals. “While the octopuses we know from shallow waters usually care for their brood, such behavior does not seem to impart any evolutionary advantage to deep-sea dumbo octopuses”, Dr. Ziegler explains.

The find belongs to the genus Grimpoteuthis

On the basis of the size ratios and shape of the internal organs it was possible to assign the rare specimen to the dumbo octopus genus Grimpoteuthis, an absolute novelty for young dumbos. “It was unfortunately not possible to determine the species, because the North Atlantic deep sea fauna is not fully known yet”, says Shea. In particular the deep sea still shows many white spots on the global biodiversity map. Therefore, in their publication, the scientists again emphasize the importance of protecting this sensitive habitat. Deep-sea trawling and mining operations endanger the habitat of deep-sea corals and all organisms associated with these animals, some of which have not yet been researched.