Rapid evolution in fish: genomic changes within a generation 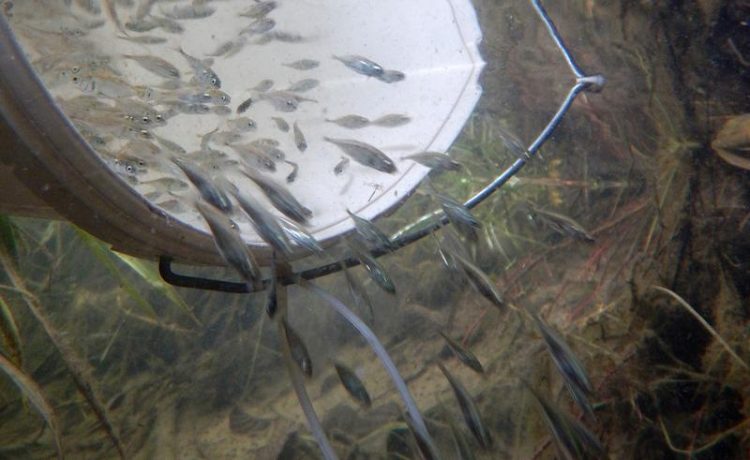 3000 experimental fish were released into a natural river habitat without stickleback, exposing them to natural selection. After one year, the remaining fish were recaptured and examined genetically. University of Basel, Dario Moser

Evolution is usually viewed as a slow process, with changes in traits emerging over thousands of generations only. Over the recent years, however, research has indicated that adaptation in specific traits can occur more quickly.

However, very few studies outside microorganisms were able to demonstrate empirically how quickly natural selection shapes the whole genome.

In a second step, the researchers released thousands of these experimental fish into a natural river habitat without resident stickleback, exposing them to natural selection. After a year, the remaining fish were recaptured and examined genetically.

“The hypothesis of this experiment was that in the river habitat in which the experimental animals had to survive, genetic variants of the original river population would increase in frequency,” says Berner. “However, we had no idea whether this would be measurable within a single generation.”

To record potential changes in the genome, the researchers first had to identify the DNA regions most likely to be targeted by natural selection. To do so, they compared the original lake and river populations based on DNA sequence data.

This revealed hundreds of regions in the genome likely important for adapting to the lake and river conditions. In precisely these regions, the experimental population’s DNA sequence data from before and after the field experiment were then compared to identify changes in the frequency of genetic variants.

The result supported the hypothesis: on average, the frequency of the river variants increased by around 2.5% at the expense of the lake variants. “This difference might appear small at first glance, but is truly substantial when extrapolated over a few dozen generations,” says Berner.

The experiment demonstrates that evolution can occur very quickly right in front of our eyes – and not only in microorganisms. “Such rapid evolution may help some organisms to cope with the current rapid environmental changes caused by humans,” Berner concludes.