Home / Life Sciences / Process behind the organ-specific elimination of chromosomes in plants unveiled
02.06.2020

Process behind the organ-specific elimination of chromosomes in plants unveiled 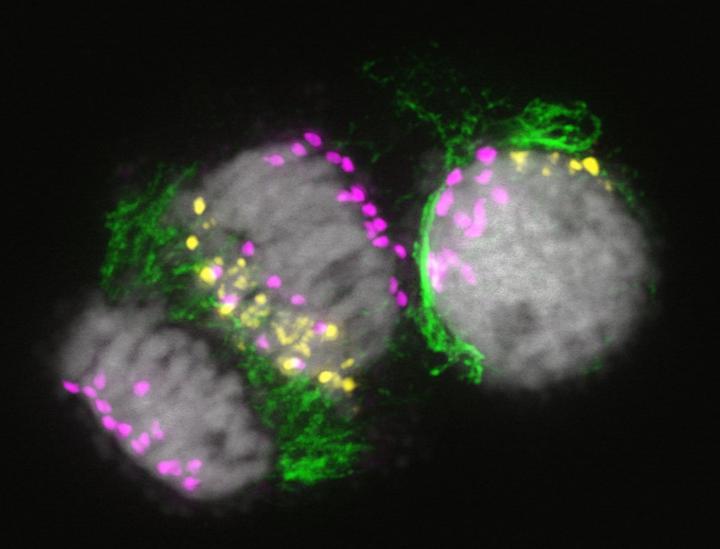 Some plants and animals on the other hand, are known to systematically ensure that the DNA content between some of their organs differs. Whilst the phenomenon of “programmed DNA elimination” has been known since 1887, the process with which plants achieve it, had stayed elusive.

Researchers from the Leibniz Institute of Plant Genetics and Crop Plant Research (IPK) in Gatersleben have now finally been able to explain the underlying mechanisms.

Within their investigation, the researchers focused on the organ-specific elimination of B chromosomes within goatgrass, Aegilops speltoides. B chromosomes are “selfish” chromosomes, which bring no apparent benefit to the organism. Goatgrass, a progenitor of our common wheat, can carry up to 8 of these supernumerary chromosomes. However, whilst B chromosomes can be found in the leaves, stem and flower of the grass, their roots are a B chromosome-free zone.

Through the detailed investigation and comparison of Ae. speltoides strains with and without B chromosomes, the researchers gained novel insights into the origins of B chromosomes. Further, their observations confirmed that the elimination of selfish chromosomes is a strictly controlled root-specific process.

The elimination starts with the onset of the embryonic tissue differentiation and can eradicate up to 100% of the targeted B chromosomes. As Prof. Andreas Houben let us know: “Elimination of B chromosomes occurs due to mitotic chromosome nondisjunction.

With its exceptional efficiency rate, the programmed elimination process of chromosomes has the potential of becoming a highly useful addition to the genetic toolbox. When induced artificially, it could enable the elimination of chromosomes or chromosome sets for medical or plant breeding purposes.

In the meanwhile, plants continue to benefit from their process in a more down to earth way – the research suggests that the removal of the supernumerary chromosomes spares the root cells from having potentially harmful B chromosome located genes.