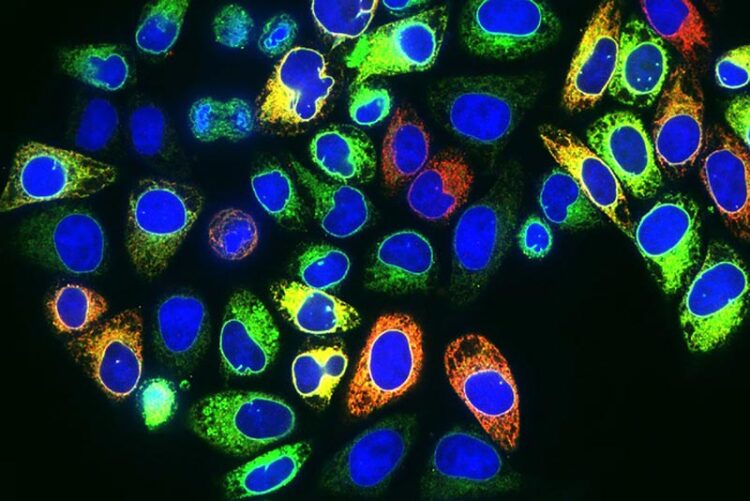 Proteins labeled with colored tags fill the main compartment — but not the nuclei (blue) — of human cervical cancer cells. Green cells contain the protein TRPV2, red cells contain STING, and yellow and orange cells contain a mixture of both. The proteins are part of a newly discovered DNA-protection pathway that potentially could be targeted to improve cancer therapies, according to researchers at Washington University School of Medicine in St. Louis.
Credit: Lingzhen Kong/Washington University

Cells zealously protect the integrity of their genomes, because damage can lead to cancer or cell death. The genome — a cell’s complete set of DNA — is most vulnerable while it is being duplicated before a cell divides. Cancer cells constantly are dividing, so their genomes are constantly in jeopardy.

Researchers at Washington University School of Medicine in St. Louis have identified a previously unknown signaling pathway cells use to protect their DNA while it is being copied. The findings, published Jan. 24 in the journal Molecular Cell, suggest that targeting this pathway potentially could boost the potency of cancer therapeutics.

“A cell that can’t protect its genome is going to die,” said senior author Zhongsheng You, PhD, a professor of cell biology & physiology. “This entire pathway we found exists to protect the genome so the cell can survive in the face of replication stress. By combining inhibitors of this pathway with chemotherapy drugs that target the DNA replication process, we potentially could make such drugs more effective.”

Replication stress occurs when the cell’s DNA duplication machinery runs into problems copying the genome. Certain stretches of DNA are inherently difficult to copy, because they contain many repeated sequences. Factors that damage the DNA, such as radiation and toxic molecules, also cause replication stress, as does the activation of cancer-causing genes. Dozens of cancer drugs, including widely used medications such as cisplatin and doxorubicin, work by damaging the DNA and increasing replication stress.

You studies how cells protect their genomes while they are being duplicated. Early in his career, he worked on the ATR-Chk1 genome-protection pathway — a pathway that controls the cell-division cycle and prevents stalled replication machinery from failing entirely and causing breaks in the DNA. For the past eight years, he and his team painstakingly have been piecing together another previously unknown genome-protection pathway. With this new study, the final piece of the puzzle has clicked into place.

The process they discovered goes like this: When the DNA-duplicating machinery stalls, a protein called Exo1 that normally follows behind the machinery gets a little out of hand. Exo1’s job is to perform quality control by cutting out incorrectly copied pieces of DNA, but when the machinery stops moving forward, Exo1 starts snipping away haphazardly, cleaving off bits of DNA that then make their way out of the nucleus and into the main part of the cell. DNA is not found outside the nucleus under normal conditions, so its presence in the main part of the cell sets off an alarm. Upon encountering a fragment of DNA, a sensor molecule triggers a cascade of molecular events, including the release of the calcium ion from a cellular organelle known as the endoplasmic reticulum, which in turn shuts down Exo1, preventing it from dicing up the genome any further until the problem with the machinery can be fixed.

This newest study describes the discovery of DNA fragments as the warning signal that sets off the whole genome-protection response. The study was led by first author Shan Li, PhD, as a postdoctoral researcher and then a staff scientist in You’s lab. Li is now an assistant professor at Zhejiang University School of Medicine in Hangzhou, China. Co-author Lingzhen Kong, a graduate student, also made important contributions to the study.

Over the years, You and colleagues have identified eight protein factors involved in this genome-protection pathway. Most of them already have inhibitors under development that could be repurposed for cancer studies.

Several of the proteins in this pathway also play a role in other critical biological processes, including immunity, metabolism and autophagy, the process by which cells break down their own unwanted materials.

“One of the most exciting things about this pathway is how it intersects with so many other pathways,” You said. “I’ve been focusing on cancer, but much of this could also apply to autoimmune diseases. Two of the proteins we identified have been linked to chronic activation of the immune response and autoimmune disease. We want to understand the relationship between this replication-stress response pathway and the innate immune response pathway. The work we do is very basic, and it is so exciting to connect the dots between these fundamental processes and see how they relate to human health and disease.”