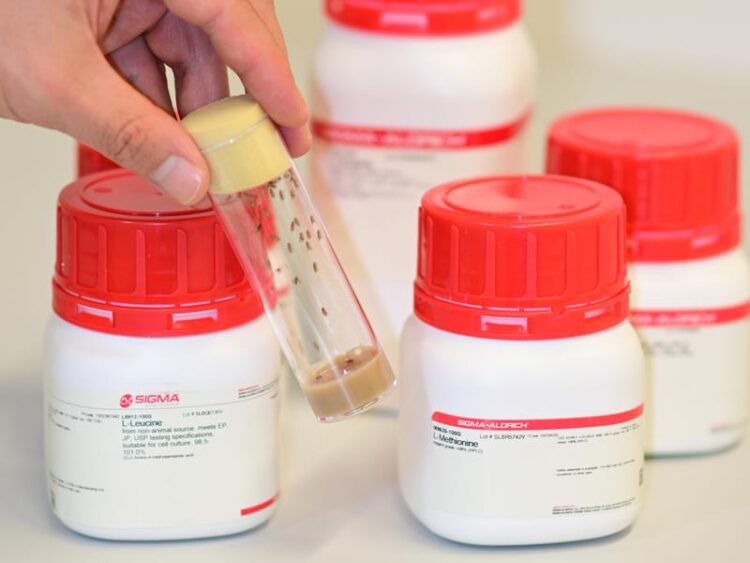 Reduced food intake, known as dietary restriction, leads to a longer lifespan in many animals and can improve health in humans. The molecular mechanisms underlying the positive effects of dietary restriction are still unclear. Researchers from the Max Planck Institute for Biology of Ageing have now found one possible explanation in fruit flies: they identified a protein named Sestrin that mediates the beneficial effects of dietary restriction. By increasing the amount of Sestrin in flies, researchers were able to extend their lifespan and at the same time these flies were protected against the lifespan-shortening effects of a protein-rich diet.

The health benefits of dietary restriction have long been known. Recently, it has become clear that restriction of certain food components, especially proteins and their individual building blocks, the amino acids, is more important for the organism’s response to dietary restriction than general calorie reduction. On the molecular level, one particular well-known signalling pathway, named TOR pathway, is important for longevity.

Sestrin senses amino acids and is a potential anti-ageing factor

“We wanted to know which factor is responsible for measuring nutrients in the cell, especially amino acids, and how this factor affects the TOR pathway”, explains Jiongming Lu, researcher in the department of Linda Partridge at the Max Planck Institute for Biology of Ageing. “We focused on a protein called Sestrin, which was suggested to sense amino acids. However, no one has ever demonstrated amino acid sensing function of Sestrin in a living being.” Therefore, Lu and his colleagues focused on the role of Sestrin in the model organism Drosophila melanogaster, commonly known as fruit fly.

“Our results in flies revealed Sestrin as a novel potential anti-ageing factor”, says Linda Partridge, head of the research team. “We could show that the Sestrin protein binds certain amino acids. When we inhibited this binding, the TOR signalling pathway in the flies was less active and the flies lived longer”, adds Lu. “Flies with a mutated Sestrin protein unable to bind amino acids showed improved health in the presence of a protein-rich diet.”

Particularly interesting: If the researchers increased the amount of Sestrin protein in stem cells located in the fly gut, these flies lived about 10% longer than control flies. In addition, the increased Sestrin amounts only in the gut stem cells also protected against the negative effect of a protein-rich diet.

Lu continues: “We are curious whether the function of Sestrin in humans is similar as in flies. Experiments with mice already showed that Sestrin is required for the beneficial effects of exercise on the health of the animal. A drug that increases the activity of the Sestrin protein might therefore be in future a novel approach to slow down the ageing process.