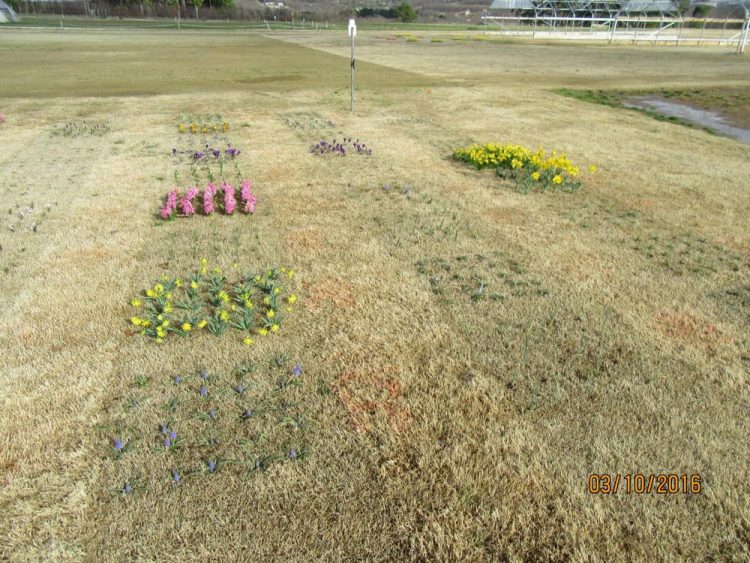 A study out of the University of Arkansas investigated whether bulbs can flower and persist in warm-season lawns while providing nutrition for pollinating insects.

Michelle Wisdom, Michael Richardson, Douglas Karcher, Donald Steinkraus, and Garry McDonald sought to determine the parameters by which bulbs can survive and be serviceable beyond their peak seasons.

Their findings are illustrated in the article “Flowering Persistence and Pollinator Attraction of Early-Spring Bulbs in Warm-season Lawns” as published in HortScience.

Early-spring flowering bulbs can increase biodiversity while adding color to lawns and other grassy areas. Flowering bulbs are known to naturalize in grassy areas such as meadows and pastures, but they must be vigorous enough to compete with the grass, and grass systems must be managed in a way to not damage the bulbs. It can be a delicate balance.

Thirty early-spring flowering bulbs were established in bermudagrass and buffalograss lawns in late August. Those bulbs were then assessed over three growing seasons for flowering characteristics, persistence, and their ability to attract pollinating insects.

A growing degree-day model was also developed to predict peak flowering times. Numerous bulb entries produced abundant flowers in both bermudagrass and buffalograss lawns in the first year after planting, but persistence and flower production were reduced in both the second and third years of the trial.

Among the useful results from this study was to discover a possible method for slowing the phenomenon of pollinator decline. Pollinator decline has been widely documented in recent years and has been associated with habitat and biodiversity loss, wide-spread planting of monocultures, pesticide usage, pollinator pests and diseases, and climate change.

Pollinator health is enhanced when diverse floral resources are available throughout the seasons when pollinators are active. “Establishing a season-long succession of flowers is critical in providing forage for pollinating insects throughout the growing season, which coincides with their life cycles” says Wisdom. “We observed pollinator activity on species of Crocus and Muscari (grape hyacinth) from January-March, providing honey bees with pollen and nectar during normal times of severe food shortage.'' Significant expanses of managed turfgrass, such as roadsides, cemeteries, and lawns, represent land areas that might be designed and managed to support pollinating insects.

Some flowering bulbs, such as crocus and grape hyacinth, have been documented to provide forage resources for honey bees in early spring, but information on pollinator preference over a wide range of bulbs is limited.

Native bees and other pollinators are typically not active during late winter months, but honey bees will forage on mild winter days, although they may be limited by temperature to short-distance flights.

The researchers demonstrated that some early-spring bulbs can persist in competitive warm-season lawns, providing pollinator forage, but species and cultivar selection is critical for long-term success. Wisdom says, “As not all flowers provide nutrition to pollinating insects, make certain to incorporate proven forage sources into the landscape.”

The complete article is available on the ASHS HortScience journal web site: https://doi.org/10.21273/HORTSCI14259-19. Or you may contact Michelle Wisdom at the University of Arkansas at mmwisdom@uark.edu.

Founded in 1903, the American Society for Horticultural Science (ASHS) is the largest organization dedicated to advancing all facets of horticulture research, education, and application. More information at ashs.org.