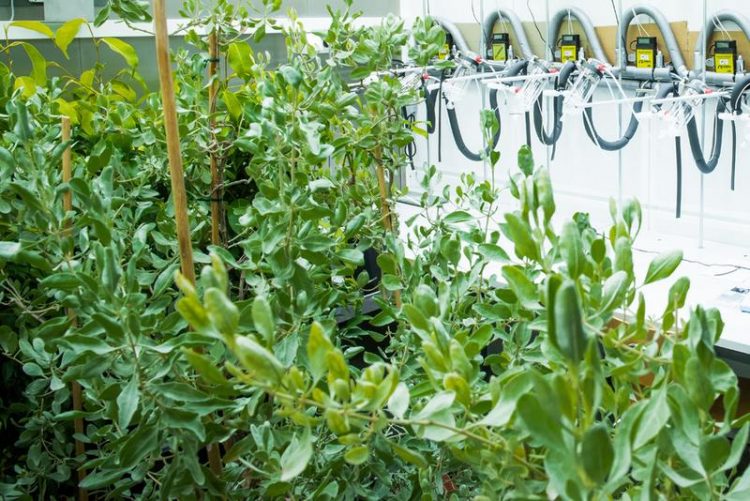 Climate chamber at the University of Freiburg. Photo: Klaus Polkowski

Heat, drought or frost is stressful for plants: Prof. Dr. Christiane Werner, Professor of Ecosystem Physiology at the Institute of Forest Sciences at the University of Freiburg, and her team are investing how plants metabolize different carbon molecules and what they investigate into volatile organic compounds (BVOCs), for example, to protect themselves from stress.

This enables them to identify processes of carbon allocation inside the plant in extreme situations and what it releases into the atmosphere. Together with Lukas Fasbender, the team has now been able to trace the metabolic pathways of the Mediterranean plant Halimium halimifolium, known as the Yellow Cistus, in real time. The study is published online in the scientific journal, “PLOS One”.

Fasbender has developed a measurement system in two separate climate chambers within which he can determine how much carbon dioxide the plants absorb or release during photosynthesis. Simultaneously, the system detects in real-time how many different biogenic volatile organic compounds the plant releases into the air, which serve, for example, for protection against different stresses.

Fasbender and Werner added pyruvate to plants, which consists of three carbon atoms and is found in the plant as a central metabolite, as it is used, for example, for the synthesis of BVOCs or for the generation of energy in respiration.

The Freiburg research team, whose work is funded by a European Research Council (ERC) Consolidator Grant, uses pyruvate, which is labeled with stable isotopes on individual atoms: “It allows us to track the path of single atoms and the rate of incorporation into BVOCs or CO2 carbon dioxide in real time,” explains Werner.

The team at the University of Freiburg was able to observe the way the Mediterranean plant incorporates pyruvate into its metabolism, breaks down the molecules and processes each carbon atom down to the very second. With this system, Dr. Ana Maria Yáñez-Serrano proves that Mediterranean rock-roses can even release very large molecules, so-called diterpenes, made of 20 carbon atoms.

At the moment the team is changing the light and temperature conditions as well as the water and air supply in the climate chambers so that the plant is forced to continuously react to new situations. “We're interested in how long a plant can protect itself against drought spells, for example, and when we reach the tipping point,” explains Werner. “We have made an important step towards a better understanding of the regulation of plant carbon allocation into primary metabolism and BVOC biosynthesis based on the current results of our real-time analysis.”

Article about the research project in the online magazine:
http://www.pr.uni-freiburg.de/pm-en/online-magazine/research-and-discover/stress…