The pancreas as we’ve never seen it before 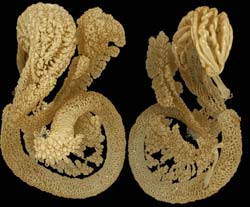 OPT images depicting two views of the embryonic stomach, intestine, and pancreas of a mouse. The newly developed algorithms presented in IEEE Transactions on Medical Imaging allow OPT imaging of biomedical preparations in great detail. The study was performed in collaboration with researchers at the Centre for Genomic Regulation in Barcelona, Spain, as well as the Department of Computer Science at Umeå University and Umeå Centre for Molecular Medicine (UCMM). The two images depict the same preparation; the image on the right is rotated 180 degrees. Photo and ©: Authors of the article.<br>

With the aid of this imaging technology, they have now described aspects of how the pancreas develops during embryonic development and how the so-called islets of Langerhans are distributed in the adult organ. The findings are important for the interpretation of modeling systems for diabetes.

New methods for the Optic Projection Tomography (OPT) imaging technology are presented by Umeå researchers in the prestigious journal for scientific imaging, IEEE Transactions on Medical Imaging. Using these methods, the researchers have also made new discoveries about the developmental biology and adult structure of the pancreas. These discoveries are being published in the journals PLoS ONE and Islets.

OPT is a technique for three-dimensional visualization of gene and protein expression in tissue samples. The technology, which is broadly similar to medical computer tomography, uses ordinary light instead of x-rays and is being used more frequently in basic research fields such as developmental biology, plant biology and pathology. OPT, which was originally limited to analyses of small preparations, has previously been refined by the Umeå scientists to enable analysis of entire organs, such as the pancreas from various rodent model systems to understand diabetes.

In the study now being presented in IEEE Transactions on Medical Imaging the researchers describe a computer-based technique for correcting distortions in the creation of OPT images. The newly developed methods contribute generally to enhanced quantitative and visual OPT analyses in various types of tissues by increasing the sensitivity to small and faintly illuminated objects and by creating a more exact reproduction of the cells depicted in the tissue.

Using the newly developed methods, the scientists present new findings about the developmental biology and structure of the pancreas. The pancreas contains the so-called islets of Langerhans, which produce the hormone insulin. Disrupted insulin production and/or in the ability of the body’s cells to respond to insulin signals can lead to diabetes.

In yet another study, in the journal Islets, the researchers show that the insulin-producing islets are more numerous and considerably more unevenly distributed in the pancreas than was previously thought. For instance, the gastric lobe of the pancreas contains relatively more islets of Langerhans than the rest of the organ does.

Taken together, these studies offer information that is valuable to help evaluate how hereditary and environmental factors affect the number of insulin producing cells in various model systems for diabetes. The studies were made possible by grants from the Kempe Foundations, among others.