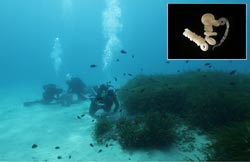 Olavius algarvensis, a marine worm (seen in inset) found in shallow waters off the coast of Elba, Italy, relies on microbes that live in its body to process its waste and provide energy. ORNL researchers used metaproteomics to help understand this microbial community, which serves as a model for more complex communities such as those found in humans. (Photo credit: Christian Lott/HYDRA/Max Planck Institute for Marine Microbiology, Bremen)<br>

In a paper published in the Proceedings of the National Academy of Sciences, a multi-institutional research team analyzed the proteins found in a marine worm known as Olavius algarvensis. The worm lacks a digestive system and relies on microbes that live in its body to process its waste and provide energy. Previous research, however, had not untangled the metabolic details of this mutually beneficial, or symbiotic, relationship.

“This community is like the simplest form of the human gut,” said coauthor Nathan VerBerkmoes of ORNL. “It is a model system to understand symbiosis.”

While some complex microbial communities such as the human gastrointestinal system contain hundreds of thousands of microbes, the marine worm relies on only four to five bacteria. Understanding the simple network of relationships between the worm and its symbionts, however, still required novel techniques to analyze the functions of a whole system rather than individual parts.

“Very often, you'll have a community that does function x,” VerBerkmoes said. “But if you try to isolate any one of those microbes out of the community and get it to do that function, one microbe alone can't do it. Furthermore these microbes cannot be easily isolated and studied by traditional molecular approaches.”

To unravel the interactions of the worm community, an ORNL team led by VerBerkmoes used metaproteomics, a form of analysis that identifies and categorizes the proteins in an organism's cell. Genomics, which yields the DNA sequence of an organism, can predict a cell's behavior, whereas proteomics gives scientists a real-time snapshot of what actually happens in the cell's metabolism.

The combination of genomics and proteomics can also help explain apparent redundancies in a system where several organisms appear at first glance to perform the same function.

“One of the key questions in metagenomic analyses of complex symbiotic consortia, including those of the human gut, is why there is so much functional redundancy,” said lead author Nicole Dubilier of the Max Planck Institute for Marine Microbiology. “Our metaproteomic analyses of the bacteria found in O. algarvensis indicate functional differences in the metabolism of two symbionts despite their genetic similarities. This appears to be a common theme in microbial communities.”

Metaproteomics provided indirect evidence for the research team's hypotheses about the worm community's metabolism, such as the potential use of hydrogen and carbon monoxide as energy sources. VerBerkmoes adds that while their analysis rapidly provided a broad overview of the system, the techniques do not confirm the specifics of individual protein behavior or function, which must be established via further direct biochemical studies. The research is published as “Metaproteomics of a gutless marine worm and its symbiotic microbial community reveal unusual pathways for carbon and energy use.” Coauthors include ORNL's Jacque Young, Yun-Juan Chang and Manesh Shah, and researchers from the Max Planck Institute for Marine Microbiology, the University of Greifswald, the University of Freiburg, the Institute of Marine Biotechnology in Greifswald, and the HYDRA Institute for Marine Sciences. The project was lead by Manuel Kleiner and Nicole Dubilier from the Max Planck Institute for Marine Microbiology.

The entire proteome dataset is available for open access at: http://compbio.ornl.gov/olavius_algarvensis_symbiont_metaproteome/.

The study was supported by the Max Planck Society, by the Laboratory Directed Research and Development program at Oak Ridge National Laboratory, and by a grant of the German Research Foundation.

ORNL is managed by UT-Battelle for the Department of Energy's Office of Science. DOE's Office of Science is the single largest supporter of basic research in the physical sciences in the United States, and is working to address some of the most pressing challenges of our time. For more information, please visit http://science.energy.gov.