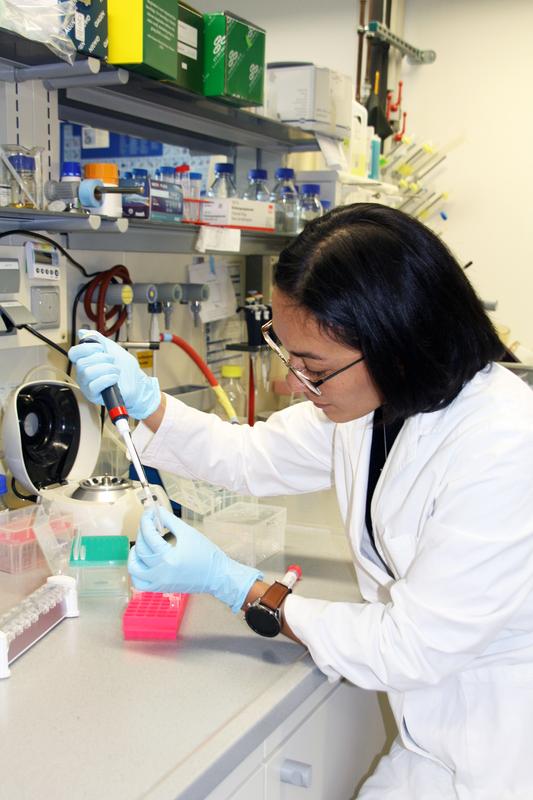 Iana Kim, first author of the new study, in a laboratory of the research group "Gene Regulation by Non-coding RNA” at the University of Bayreuth. Photo: Christian Wißler

Research groups around the world are investigating the amazing regenerative capacity of planarians. Their work has been revolutionized by the combination of biochemical methods with high-throughput techniques coupled to bioinformatics. The study from Bayreuth focuses on Schmidtea mediterranea, the planarian model species that is best studied.

Its stem cells contain the proteins SMEDWI-2 and SMEDWI-3. Without these proteins from the group of PIWI proteins, the flatworms cannot regenerate, let alone remain viable. The Bayreuth researchers discovered that the aforementioned two proteins bind to small RNAs, known as piRNAs. This enables the latter to recognise and degrade jumping genes (transposons).

Importantly, jumping genes have the habit of constantly changing their position within the genome, thereby triggering mutations. By degrading transposons and rendering them harmless, piRNAs make an important contribution to the stability of genetic information, especially in planarian stem cells.

This way, scientists are now closer to understand how the stem cells of planarians maintain the flexibility necessary to regenerate body parts without destroying themselves at the same time.

“piRNAs have this stabilising effect in humans, too, but they only occur in our germ cells. Planarians, in contrast, have large numbers of piRNAs in adult pluripotent stem cells, which go on to differentiate and develop into various tissue types. Planarians are therefore an ideal model organisms to investigate the mode of action of piRNAs,” says Dr. Claus Kuhn.

Another function of piRNAs: degradation of messenger RNAs

Moreover, the Bayreuth researchers have discovered another function for SMEDWI-3: some piRNAs that SMEDWI-3 binds to do not subsequently target jumping genes but instead recognize mRNAs. These molecules, also known as “messenger RNAs”, contain information for the synthesis of proteins. In some cases, they are degraded by the piRNAs bound to SMEDWI-3, in other cases they are only bound by SMEDWI-3 and possibly even protected from degradation.

“We were very surprised when we found this additional function of SMEDWI-3, which occurs independently of the degradation of jumping genes. It seems possible that some piRNAs bound to SMEDWI-3 are used for the degradation of mRNAs because this keeps the stem cells in a more stable state of pluripotency. Pluripotency could conceivably be jeopardized if too much any given messenger RNA is available and used for protein synthesis. However, it is still unclear what the final purpose of SMEDWI-3 binding to messenger RNAs is, when it does not lead to RNA degradation. This is what we hope to find out in the future,” says Iana Kim, first author of the new study and doctoral student in Dr. Claus Kuhn's laboratory.