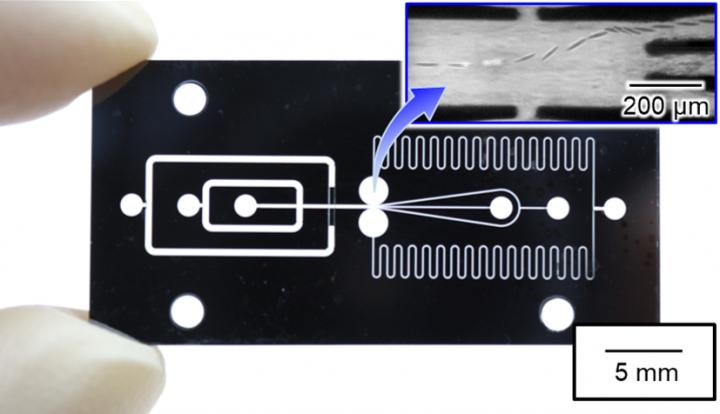 The photograph shows the developed microfluidic chip which enables us to sort cells at high speed of 16 microseconds. The enlarged view shows a demonstration of on-chip cell sorting of a Euglena gracilis cell (time interval of each frame: 40 μs). Credit: Shinya Sakuma, Yusuke Kasai, Takeshi Hayakawa, and Fumihito Arai

The sorting of individual cells is necessary for many biological applications, including the isolation of specific cell types from cell suspensions. A fluorescence-activated cell sorting (FACS) has been used for high-throughput cell sorting.

In this method, lasers are used to excite auto-fluorescence or tagged-fluorescence of cell included in droplets, and then droplets are diverted into different containers depending on their characteristics.

However, this technique is concerned about sample infections due to aerosols generation. Additionally, a FACS of larger cells requires the samples to be processed under low pressure through wider nozzles to prevent damage. Thus, sorting is limited to low-level throughput.

Research at Nagoya University on cell sorting used a microfluidic chip to prevent sample infection. This chip has microchannels into which cell suspensions are introduced for sorting. The research group integrated two externally-driven on-chip pumps into the microfluidic chip for high-speed flow control. Using a high-speed actuator as the driving source of pump, they succeeded in producing a flow with 16 microseconds for cell sorting.

The article “On-chip cell sorting by high-speed local-flow control using dual membrane pumps.” was published in Lab on a Chip at DOI: 10.1039/c7lc00536a.