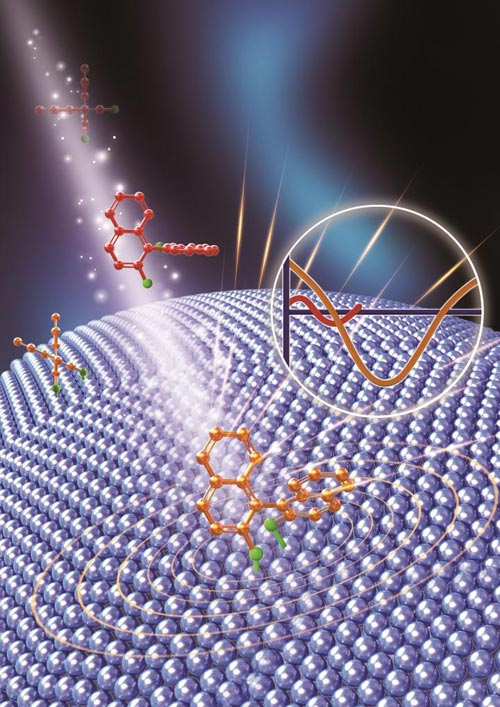 Optical activity of molecules is amplified in more than 10 folds, by structure-specific adsorption of the molecules on chiral nanoparticles. Credit: HKBU

The new HKBU invention can be applied to the drug discovery process, as well as the production and quality control stages of pharmaceutical manufacturing. It can also be used in environmental monitoring.

Medicinal drugs and pesticides are composed of organic molecules. Normally each molecule has two “chiral” versions which are mirror images of each other in terms of absolute configuration. While otherwise identical, these “right-handed” and “left-handed” molecules can have totally different effects.

For example, anti-inflammatory drug naproxen of a particular type of chirality can treat arthritis pain while its mirror image twin can result in liver poisoning. As a result, selecting only useful chiral molecules during the drug discovery process can help produce pure drugs that can cure specific diseases with no adverse effects.

However, producing pure drugs is very expensive and time consuming. Current medicinal drugs are often made up of equal amounts of the left- and right-handed chiral molecules in what is known as a racemic mixture. While this fifty-fifty split has low production cost, it also leads to lower overall efficacy and, in some cases, can lead to toxic side effects in the human body.

According to Dr Jeffery Huang, sensitively identifying and locating the correct form of a chiral molecule during the drug discovery process is essential, but is currently difficult and time-consuming because molecules are typically too small to be sensitively monitored.

However, the specific nanomaterial designed and synthesised by the team, which is composed of silver chiral nanoparticles, can “amplify” the signal of the desired chiral molecules and improve detection sensitivity by more than 10-fold, making the location process faster, more accurate and less expensive.

Dr Huang said that this work opens a new door for material scientists to apply these metallic chiral nanoparticles to drug production processes, as currently there are a limited number of nanomaterial fabrication techniques on offer.

He said: “We have developed a breakthrough nanomaterial which uses a simple, one-step fabrication method to sensitively detect the target drug molecules in just five minutes. The ability of the chiral nanoparticles to amplify the detection sensitivity is practically desired for trace detection.”

Dr Ken Leung said that in the current multi-step drug synthesis process, both the product and chiroptical purities – which refers to the use of optical techniques for investigating chiral substances – are crucial controlling factors for producing extra-pure synthetic drug molecules.

The novel nanomaterial developed by the team will eventually provide a new platform for efficiently and effectively detecting the chiroptical purity of synthesised compounds, and will help to produce drugs without side effects. It is also a new breakthrough in the resolution of racemic drugs, he added.