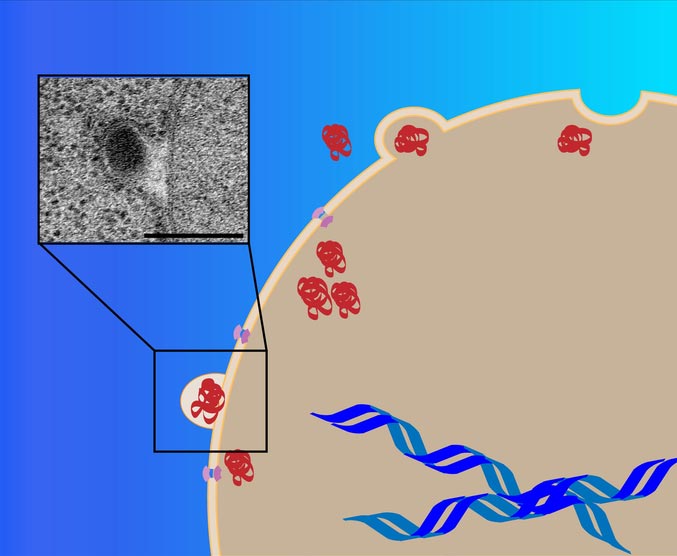 A previously undiscovered pathway for the transport of cell waste can be important for future treatments of cancer and dementia. The researchers behind the study have discovered a new pathway used by cells to remove cellular waste that otherwise would damage the cell’s genes.

The new transport pathway passes through the cell nucleus’s membrane, which normally protects our DNA. In the study, the researchers stressed the cells to increase the traffic of small envelopes of waste sent through the cell nucleus’s membrane. In this way, the researchers show a pathway used to remove cellular waste that otherwise could damage the cell’s genome.

“This insight in the cell’s normal function can be important for treatment of both cancer and dementia,” says Johanna Höög, who led the study now being published in the highly ranked scientific journal PNAS.

“Using high resolution electron microscopy, we could see how aggregates of proteins are sent in small envelops through the cell nucleus membrane. Together, we have described a previously unknown transport pathway in the cell’s waste management,” says Dimitra Panagaki, doctoral student at the Department of Chemistry and Molecular Biology at the University of Gothenburg and one of the co-authors to the study.

Inside a cell, new proteins are continually formed, while other proteins are broken down to their constituent parts and recycled. This is important for the cell’s health since, just like the build up of waste in any environment, damaged proteins can become poisonous.

“This completely unexpected link between the transport through the cell nucleus membrane and the quality control of the cell’s proteins was what I thought was most interesting,” says Jacob Croft, doctoral student at the University of Gothenburg and active in the project.

Common phenomenon in the cells of all studied species

The study also examined how common the phenomenon of sending small envelops through the cell nucleus membrane was. The researchers could show that it occurred among all species studied, from small single-cell parasites to human cells.

When the researchers then stressed the cells in different ways, such as by exposing them to hazardous substances or high temperatures, more proteins folded incorrectly and the researchers saw an increase in frequency of waste transport through the cell nucleus membrane.

The waste can kill the cell

Badly functioning waste management in the cell can create a downward spiral where waste eventually kills the cell. This sometimes occurs in the brain with Alzheimer’s disease and in some other forms of dementia.

“On the other hand, cancer cells produce more waste than healthy cells. This is used by some chemotherapies that stop normal cell waste management to result in the faster death of the cancer cells than our normal cells, forcing the cancer into remission,” says Johanna Höög.

Since the cell’s waste management system already is a focus of attack for cancer treatments, the researchers feel that the discovery of an unknown transport pathway can potentially lead to new, more effective treatments for cancer.

When the researchers treated the cells with a chemical that stops waste processing and today is used for cancer treatments, the transport of waste through the cell nucleus membrane increased.

“You could say that we sealed all the openings in the cell’s treatment plant, known as proteasomes. This caused the cell to compensate and remove the incorrectly folded proteins through this transport pathway instead,” says head of research Johanna Höög.

“We now hope to receive more research funding to study the molecular mechanisms behind this cellular waste transport and look more closely at the phenomenon in cancer cells.”

The research is a collaboration between the Faculty of Science and Sahlgrenska Academy at the University of Gothenburg and the Wenner-Gren Institute at Stockholm University.

Name of the study: Nuclear envelope budding is a response to cellular stress

Johanna Höög, senior lecturer at the Department of Chemistry and Molecular Biology, University of Gothenburg, +46-(0)766-18 39 37, johanna.hoog@gu.se .