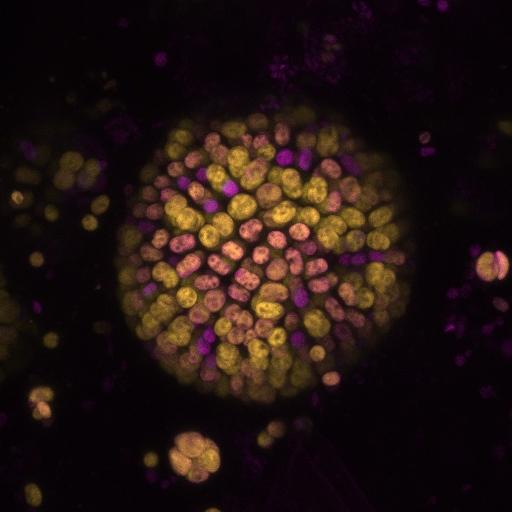 It will also tailor the way we hunt for alien life and provide insights into how we could engineer more efficient crops that take advantage of longer wavelengths of light.

The discovery, published today in Science, was led by Imperial College London, supported by the BBSRC, and involved groups from the ANU in Canberra, the CNRS in Paris and Saclay and the CNR in Milan.

The vast majority of life on Earth uses visible red light in the process of photosynthesis, but the new type uses near-infrared light instead. It was detected in a wide range of cyanobacteria (blue-green algae) when they grow in near-infrared light, found in shaded conditions like bacterial mats in Yellowstone and in beach rock in Australia.

As scientists have now discovered, it also occurs in a cupboard fitted with infrared LEDs in Imperial College London.

Photosynthesis beyond the red limit

The standard, near-universal type of photosynthesis uses the green pigment, chlorophyll-a, both to collect light and use its energy to make useful biochemicals and oxygen. The way chlorophyll-a absorbs light means only the energy from red light can be used for photosynthesis.

Since chlorophyll-a is present in all plants, algae and cyanobacteria that we know of, it was considered that the energy of red light set the 'red limit' for photosynthesis; that is, the minimum amount of energy needed to do the demanding chemistry that produces oxygen. The red limit is used in astrobiology to judge whether complex life could have evolved on planets in other solar systems.

However, when some cyanobacteria are grown under near-infrared light, the standard chlorophyll-a-containing systems shut down and different systems containing a different kind of chlorophyll, chlorophyll-f, takes over.

Until now, it was thought that chlorophyll-f just harvested the light. The new research shows that instead chlorophyll-f plays the key role in photosynthesis under shaded conditions, using lower-energy infrared light to do the complex chemistry. This is photosynthesis 'beyond the red limit'.

Lead researcher Professor Bill Rutherford, from the Department of Life Sciences at Imperial, said: “The new form of photosynthesis made us rethink what we thought was possible. It also changes how we understand the key events at the heart of standard photosynthesis. This is textbook changing stuff.”

Another cyanobacterium, Acaryochloris, is already known to do photosynthesis beyond the red limit. However, because it occurs in just this one species, with a very specific habitat, it had been considered a 'one-off'. Acaryochloris lives underneath a green sea-squirt that shades out most of the visible light leaving just the near-infrared.

It was thought that light damage would be more severe beyond the red limit, but the new study shows that it is not a problem in stable, shaded environments.

Co-author Dr Andrea Fantuzzi, from the Department of Life Sciences at Imperial, said: “Finding a type of photosynthesis that works beyond the red limit changes our understanding of the energy requirements of photosynthesis. This provides insights into light energy use and into mechanisms that protect the systems against damage by light.”

These insights could be useful for researchers trying to engineer crops to perform more efficient photosynthesis by using a wider range of light. How these cyanobacteria protect themselves from damage caused by variations in the brightness of light could help researchers discover what is feasible to engineer into crop plants.

More detail could be seen in the new systems than has ever been seen before in the standard chlorophyll-a systems. The chlorophylls often termed 'accessory' chlorophylls were actually performing the crucial chemical step, rather than the textbook 'special pair' of chlorophylls in the centre of the complex.

Dr Dennis Nürnberg, the first author and initiator of the study, said: “I did not expect that my interest in cyanobacteria and their diverse lifestyles would snowball into a major change in how we understand photosynthesis. It is amazing what is still out there in nature waiting to be discovered.”

Peter Burlinson, lead for frontier bioscience at BBSRC – UKRI says, “This is an important discovery in photosynthesis, a process that plays a crucial role in the biology of the crops that feed the world. Discoveries like this push the boundaries of our understanding of life and Professor Bill Rutherford and the team at Imperial should be congratulated for revealing a new perspective on such a fundamental process.”