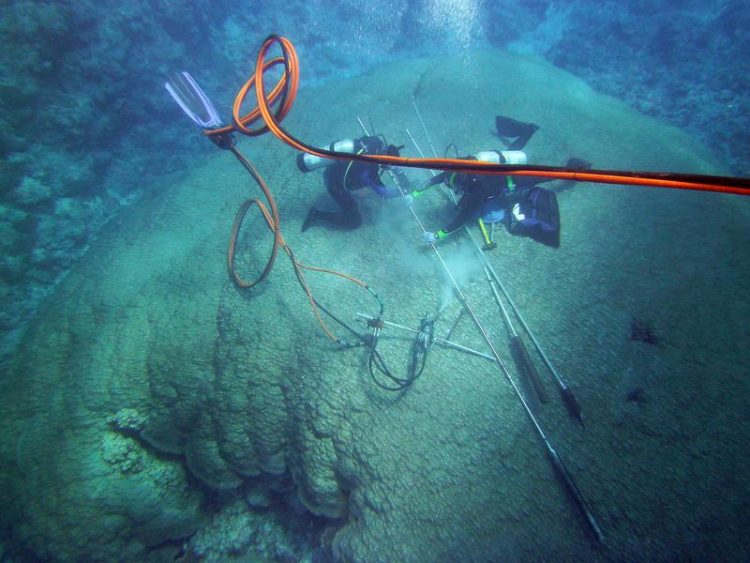 Researchers take a drill core from a hard coral of the genus Porites in the reef off American Samoa. To protect the coral, the borehole is then filled with cement. Photo: Braddock K. Linsley

Through use of fossil fuels and deforestation, humans cause a steady increase in carbon dioxide (CO2) in the atmosphere. Oceans are regarded as CO2 reservoirs, absorbing more than 40% of this human-generated greenhouse gas.

When excess CO2 reacts with seawater to form carbonic acid, the pH decreases. This process is known as ocean acidification and affects calcifying marine organisms and their ability to build a fully functional calcareous skeleton.

Cool sea water in temperate latitudes absorbs more CO2 than seawater in the tropics. The consequences of ocean acidification are clearer here and can already be seen among others in the lime skeletons of biogenic calcifiers such as oysters, clams, or mussels

. For tropical hard corals, on the other hand, there are only few studies that have shown that they react to the more acidic environment. The work of an international research team now shows that they also reflect the changed water chemistry.

In the reefs of the South Pacific, researchers extracted cores from corals of the genus Porites, some over 1500 years old. These are massive and very resistant stone corals that form huge hemispheres and can grow to several meters in size.

“We see in them the future ‘winners’ in the fight for survival that climate change is forcing on corals,” explains Henry Wu, geologist at the Leibniz Centre for Tropical Marine Research (ZMT) in Bremen and one of the authors of the study.

There are indications of this, for example, in Papua New Guinea. There, volcanic CO2 flows out of the seabed and strongly acidifies the surrounding seawater. This has impacted the adjacent reef witnessing a reduction in coral diversity and recruitment through the domination of the massive corals of the genus Porites over the structurally complex corals.

The researchers took coral skeletal samples from drill cores and examined them for carbon isotopes. Stony corals grow between a few millimeters and several centimeters per year and form growth layers like trees. They build both types of carbon isotopes, 12C and 13C, into their limestone skeletons.

The investigations revealed a numerical ratio of the two isotopes which remained largely constant over many centuries and shows only slight natural fluctuations. It was not until the middle of the 20th century, with advancing industrialisation, that this numerical ratio changed considerably.

“We found a clearly increasing share of 12C from 1950 onwards”, reports Henry Wu, “This is what we call ‘old’ carbon, because it is the carbon that is stored in the ground for millions of years and only gets into the atmosphere through the use of fossil fuels”. How the changed isotope ratio affects a coral skeleton has not yet been researched. However, the 12C isotope is somewhat lighter than 13C and is incorporated more quickly into the lime skeleton.

With the isotopes the corals store further clues to their environment, which reach far into the past. “We have found that the carbon isotope ratios allow us to make much more accurate predictions about past sea level changes than was previously possible,” says Henry Wu. “Understanding the past, on the other hand, helps to make predictions for the future”.