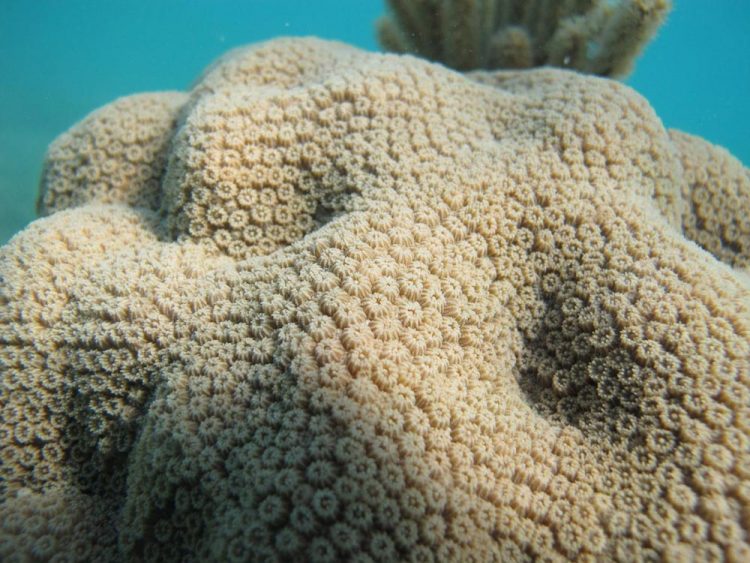 A close up view of the surface of an Orbicella faveolata coral colony from a reef in Los Canarreos, Cuba. Credit: Amy Apprill, Woods Hole Oceanographic Institution

A new study from scientists at the Woods Hole Oceanographic Institution (WHOI) has begun to describe and catalogue microbes that live just a few centimeters from the surface of corals, laying the groundwork for future studies. The researchers' work will be published May 21 in the journal Limnology and Oceanography.

“Microbes are everywhere on reefs. There's roughly a million of them in a single milliliter, which is about 20 drops, of seawater. But we don't yet have a good sense of the microbial population that exists right next to corals,” says Laura Weber, lead author of the study and a PhD student in the joint WHOI-MIT program.

“There's some evidence from previous studies that corals may be surrounded by unique microbial cells, but many questions are still unanswered. Do these cells differ with coral species or reef site? How might they function?” she says.

To begin to chip away at those questions, Weber and her colleagues focused on sampling the seawater surrounding Caribbean corals across multiple reefs.

Weber thinks that microbes immediately next to the corals could play a role in breaking down waste products from the colonies, introducing new nutrients and potentially letting symbiotic algae or pathogens into the corals themselves.

Along with her PhD advisor, Amy Apprill, Weber traveled to a protected coral reef system called the “Jardines de la Reina,” located amid a string of remote islands near the southern coast of Cuba. Once there, Weber teamed with local Cuban scientists Patricia Gonzalez-Díaz and Maickel Armenteros to dive on the reefs and collect dozens of small samples from the water near five different species of coral.

“The Cuban reefs provided a perfect opportunity for this study. Because they're so remote, there's limited impact from human activities,” says Apprill, a coral reef ecologist at WHOI and senior author on the paper. A majority of the reef system was established as a marine protected area by the Cuban government in 1996, so fishing is prohibited and diving tourism is restricted.

“The Cuban scientists we collaborated with are also doing research that complements our own. They have extensive knowledge of their marine environment, and provided access to research permits, which was a clear advantage when planning sites for cruises,” Apprill adds.

Once the samples were back in the US, Weber analyzed the genetic material of the microbes inside them to figure out which species were present. She found that different types of coral did indeed have different microbial communities living near them. “We started finding cool species-specific trends,” Weber says.

“I didn't think we would see any differences at all–but it turned out that in some areas, the bacterium Endozoicomonas, which lives symbiotically with corals, was actually enriched in the seawater closer to corals compared to the surrounding reef water. That means the region adjacent to corals could be important for attracting symbionts to a coral's surface, or it could represent a region where corals shed their symbionts.”

“Scientists have been working for a while now to understand the role of microorganisms in reef environments and within coral colonies. But now we have evidence that demonstrates a possible relationship between seawater microbes and coral symbionts. That gives us some clues to how they find and infect coral colonies, and how they might impact the health of the corals. It's very exciting,” Weber says.

This project was funded by the Dalio Explore Fund, which supports scientific research at WHOI. The fund is part of Dalio Philanthropies' larger commitment to ocean exploration and discovery, including the new OceanX initiative.

“We are thrilled to support WHOI's scientific research efforts through the Dalio Explore Fund,” said Vincent Pieribone, Vice Chairman, OceanX. “The findings from this mission will help reveal the secret lives of coral, how their microbiome – similar to ours – supports good health, and how, when they are at an imbalance, corals, like humans, can become sick.”

The Woods Hole Oceanographic Institution is a private, non-profit organization on Cape Cod, Mass., dedicated to marine research, engineering, and higher education. Established in 1930 on a recommendation from the National Academy of Sciences, its primary mission is to understand the oceans and their interaction with the Earth as a whole, and to communicate a basic understanding of the oceans' role in the changing global environment.