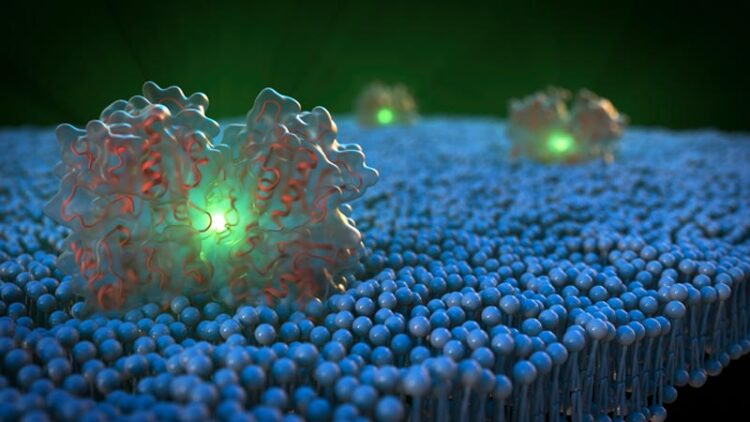 The illustration shows a portion of the receptor pGC-A, known as the extracellular domain, which protrudes from cell surfaces in the cardiovascular system. Small molecules bind with the receptor and exert subtle control over blood pressure. The new research offers the first sneak peek at the full-length receptor, a vital step in the development of new drugs to treat hypertension and other afflictions.
Credit: Graphic by Jason Drees

Cardiovascular diseases remain a leading cause of death around the world. A primary contributor to these afflictions is high blood pressure, or hypertension.

While treatments exist for the condition, which affects tens of millions of Americans, these remedies are not without side effects, and some variants of the disorder are treatment-resistant. The need for more effective therapies to address hypertension-related disease is therefore acute.The illustration shows a portion of the receptor pGC-A, known as the extracellular domain, which protrudes from cell surfaces in the cardiovascular system. Small molecules bind with the receptor and exert subtle control over blood pressure. The new research offers the first sneak peek at the full-length receptor, a vital step in the development of new drugs to treat hypertension and other afflictions.

To accomplish this however, biologists need more detailed maps of the mechanisms underlying cardiovascular regulation. One such regulator is a protein receptor that sits atop cardiovascular cells, acting as a conduit for messages that are transmitted when specific hormone molecules bind with them.

Known as pGC-A, this membrane receptor acts a bit like a thermostat, sensitively adjusting the body’s blood pressure to maintain a homeostatic balance essential for health. The receptor acts not only as a vital cellular component for vascular and cardiac homeostasis, but also plays an important role in lipid metabolism and is implicated in cancer development.

In a new study, published in the current issue of the journal Scientific Reports, researchers from Arizona State University’s Biodesign Center for Applied Structural Discovery and their colleagues, in collaboration with Mayo Clinic, Rochester, make critical progress toward unveiling the structure of pGC-A.

The study provides the first purification, characterization and preliminary structural analysis of the full-length protein receptor. The research advances include crystallizing the protein and showing that these crystals diffract X-rays — two critical steps essential to solving the structure.

A clearer understanding of this complex receptor and its signaling mechanisms paves the way for a new suite of anti-hypertensive drugs, which could help stave off heart attacks and strokes and improve recovery from these incidents.

“This accomplishment is the first described X-ray diffraction for a new class of membrane protein receptors, and represents an extraordinary effort by our graduate student, Shangji Zhang,” says co-author and Biodesign researcher Debbie Hansen. “Structures of unique classes of membrane proteins often require years of effort and are built on similar critical advances.”

Co-author John C. Burnett Jr., from the Department of Cardiovascular Medicine, Mayo Clinic, Rochester, has been working to develop candidate molecules for new anti-hypertensive drugs, based on the structure of the pGC-A receptor.

The burden of hypertension has been steadily growing, resulting in a recent recommendation by the Report of the National Heart, Lung and Blood Institute Working Group on Hypertension to “develop new drugs and treatments to target diverse hypertensive patient populations, such as patients with resistant hypertension.”

Treatment-resistant forms of hypertension, which are more likely to occur in patients with obesity, diabetes or renal dysfunction, account for 12–15% of hypertensive patients. Such individuals show limited or poor response to existing therapeutics. The condition can develop when the blood vessels become calcified and inelastic, losing their ability to fully contract and relax. Clinical studies show that treating high blood pressure reduces the risk of stroke by 35–40%, and the risk of heart failure by 50%.

Cardiovascular diseases include rheumatic and congenital heart disease; coronary, cerebral and peripheral arterial disease; deep vein thrombosis; and pulmonary embolism. Coronary artery disease, a leading killer, occurs when blood flow to heart muscle cells is reduced or obstructed, which can lead to heart failure. In the United States alone, the condition is projected to increase to $70 billion by the year 2030.

The pGC-A membrane receptor exists in three primary forms. This class of receptors are so important, they comprise the majority of pharmaceutical drug targets. For most organisms, whether prokaryotes like bacteria or eukaryotes like mammals, a full 20–30% of the genome is devoted to the expression of membrane proteins. Such receptors protrude from the outer cell membrane and penetrate deep into the cell’s interior, often acting as conduits for external signals that modify the cell’s behavior.

Designing drugs to target membrane proteins however, requires a highly detailed blueprint of the receptor structure, usually with atomic-scale resolution. Using this information, drug designers can engineer a drug that will bind in a selective and precise manner with the cell receptor, to produce a given outcome.

In the case of pGC-A, the binding molecules are peptide hormones produced by cells of the cardiovascular system. Known as natriuretic peptide hormones, they occur in natural variations and can also be synthetically designed, using genetic mutation. Part of the receptor’s activity involves the conversion of GTP to cGMP, a molecule essential for the normal function of vital organs.

“The heart is not only a pump but an endocrine gland which produces a highly beneficial hormone called atrial natriuretic peptide (ANP),” Burnett says. “This hormone plays an important role in blood pressure, kidney and over all metabolic balance.”

To date, only the extracellular component of the pGC-A receptor has been characterized. The current work is a major step toward characterizing the full-length structure, particularly the transmembrane domain and functional intracellular domain regions, about which little is currently known.

To achieve this, the researchers use a method known as baculovirus protein expression. The process involves turning insect cells into tiny protein production factories. Insect cells resemble human cells in terms of their protein-processing machinery yet are easier and cheaper to grow than mammalian cells. Baculoviral vectors allow researchers to turn an insect virus into a vehicle for delivering the genetic recipe for a protein.

The pGC-A receptor protein can then be extracted, purified and subjected to X-ray crystallography, to determine its structure. The process is tricky, labor-intensive and prone to failure for a variety of reasons. Only a small number of the many existing membrane proteins have been fully characterized, making the preliminary characterization of pGC-A an impressive achievement.

The insect cell expression system offers several advantages for protein expression, particularly in the case of membrane proteins like pGC-A. The technique makes it easier for researchers to extract properly folded membrane proteins directly from the cell membrane, compared with the bacterial expression of misfolded and non-functional proteins common with traditional expression in Escherichia coli (E. coli) bacteria.

“This was a massive accomplishment,” Hansen says. “Membrane proteins are not trivial to purify, and she was also able to get crystallization of the protein and X-ray diffraction.”

The research opens the door to the detailed characterization of other membrane proteins, which may ultimately find their way into effective drugs to control hypertension and a broad range of other medical conditions.

“A major goal is to develop breakthrough drugs based on ANP and its target receptor in humans to treat high blood pressure, heart failure as well as obesity,” Burnett says. “The work done by the ASU and Mayo teams and reported in Scientific Reports helps unlock the secret of the receptor target and will accelerate the development of new drugs and truly help patients worldwide.”

Petra Fromme, director of the Center for Applied Structural Discovery, who is the senior author of this study and served as the PhD supervisor of Zhang, is excited about the high impact of this work.

“Metabolic diseases are one of the most important health threats of the 21st century, with diabetes, high blood pressure and heart diseases taking the lives of millions each year — and the numbers are rising. The work on the pGC-A receptor has the potential to develop an effective drug that reduces the symptoms without serious side effects,” she said.

This project was supported by an award to J.C.B. and P.F. from the Mayo/ASU Structural Biology Alliance and by the Biodesign Center for Applied Structural Discovery at Arizona State University. This research used resources of the Advanced Photon Source, a U.S. Department of Energy (DOE) Office of Science user facility operated for the DOE Office of Science by Argonne National Laboratory under Contract No. DE-AC02-06CH11357.

The research was carried out with the generous assistance of the Biodesign Center for Innovations in Medicine and the Center for Personalized Diagnostics.