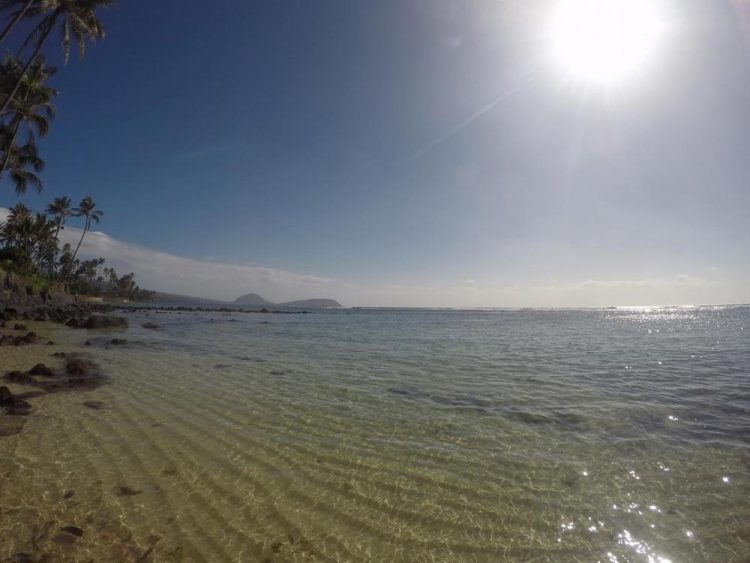 “SGD is common on nearshore coral reefs, especially in Hawai'i, so we set out to test how SGD affects coral reef growth in Maunalua Bay, O'ahu.” said Megan Donahue, associate researcher at the Hawai'i Institute of Marine Biology (HIMB) in SOEST and senior author of the study.

Two processes contribute to the overall growth of coral reefs: coral growth and bioerosion, the natural breakdown of coral reefs by reef organisms. To determine how SGD affects these processes, the research team outplanted small pieces of lobe coral on the reef flat in areas with a range of SGD and measured the changes in size over a six-month period.

They also put out blocks of dead coral skeleton across the same SGD gradients for one year to measure bioerosion rates. The blocks were scanned before and after the deployment with a micro-CT scanner, similar to a hospital CT scanner, to determine the amount of coral skeleton removed by bioeroding organisms in three dimensions.

In areas with high levels of SGD, it was a double whammy for coral reefs. Corals that were right next to SGD seeps performed poorly, likely due to the stress of too much fresh water.

“Additionally, we found that marine organisms responsible for bioerosion broke down the skeletal reef framework very quickly when exposed to high amounts of SGD,” said lead author Katie Lubarsky, who completed this research as part of her graduate degree in Marine Biology at UH Mānoa. “Many bioeroding organisms are filter feeders that perform better in high nutrient environments, so the high nutrient groundwater likely enhanced bioeroder activity. This indicates that high inputs of nutrient polluted SGD could favor reef breakdown and substantially slow down overall reef growth.”

To the researchers' surprise, SGD actually enhanced coral growth when the nutrient enrichment and freshwater from the groundwater was at low levels.

“Our results indicate that corals can thrive on SGD-impacted reefs if isolated from secondary stressors such as competition from seaweeds and sedimentation,” said Donahue. “Maunalua Bay is situated in a highly urbanized area, and the coral reefs in the bay have become degraded as the population has boomed over the last 50 years. But active management to reduce invasive algae and limit fine sediments could allow coral recovery in Maunalua Bay.”