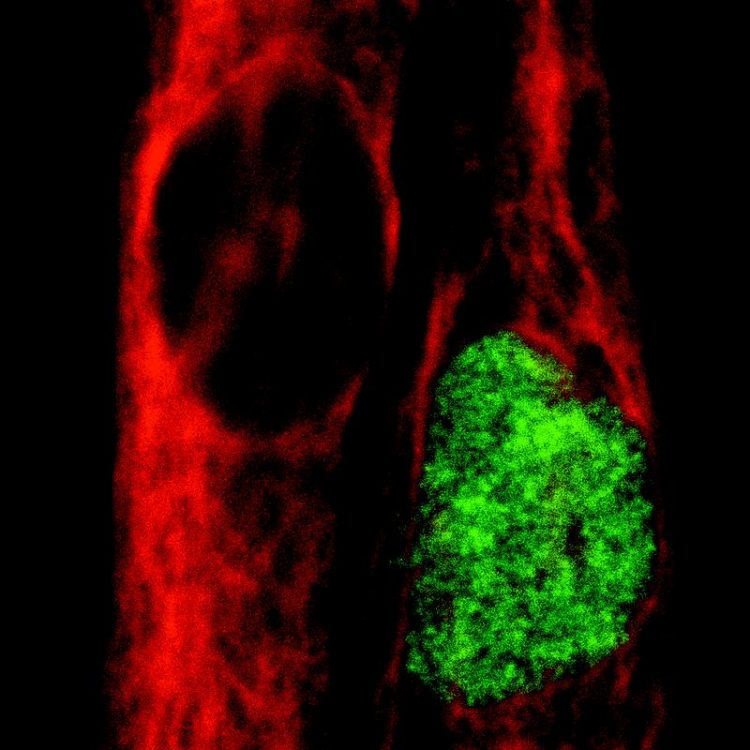 Now Dr. Andreas Marg and Prof. Simone Spuler of the Experimental and Clinical Research Center (ECRC), a joint cooperation between the Max Delbrück Center (MDC) and the Charité, have shown how this might work. They developed a method in which they did not isolate the muscle stem cells, but rather cultivated, proliferated and transplanted them along with their muscle fibers. Using this method in mice, they were able to successfully regenerate muscle tissue. Thus they have opened the door for the use of muscle stem cells to treat muscle diseases.*

“Muscle stem cells, which we also refer to as satellite cells, can awaken in their stem cell niche after decades of quiescence and can then repair damaged muscle tissue,” Professor Spuler explained. At the ECRC in Berlin-Buch, the neurologist heads the University Outpatient Clinic for Muscle Disorders and the Department of Muscle Sciences. She and her team are exploring the causes of muscle diseases. Evidence shows that satellite cells are active in people with severe muscle diseases such as Duchenne muscular dystrophy, a severe genetic disease in which the muscles degenerate. “But at some point,” she added, “the reservoir is depleted of muscle stem cells and muscle wasting cannot be stopped.”

All attempts to rebuild muscle tissue by transplanting satellite cells in patients with Duchenne muscular dystrophy have failed. The transplanted cells are not viable. Furthermore, the use of other cells with potential to regenerate muscle cells has shown little success. These cells have only limited potential to regenerate muscle. But how is it possible to nevertheless use the body’s own self-renewal potential and the reconstruction potential of satellite cells?

The offer of developmental biologist Professor Carmen Birchmeier (MDC) to participate in the network project on satellite cells (SatNet) of the Federal Ministry of Education and Research pointed Professor Spuler and her co-workers in the right direction. One of the topics of the project was to elucidate why satellite cells rapidly lose their regeneration potential if they are kept in a cell culture. This led to the idea to cultivate the satellite cells together with the surrounding muscle tissue to see whether the cells, if they remain in their accustomed milieu, might possibly regenerate better.

Muscle biopsy specimens from young and old donors
After due approval and written, informed consent, Professor Spuler and Dr. Marg obtained specimens of fresh thigh muscle tissue from patients between 20 and 80 years of age from neurosurgeons of Helios Klinikum Berlin-Buch, which like the MDC is located close to the ECRC.

From the biopsy specimens, Professor Spuler and her co-workers dissected more than 1000 muscle fiber fragments, each about 2-3 millimeters long. Remarkably, the researchers found the number of stem cells in the individual tissue specimens to be independent of the age of the donor and that thousands of myoblasts developed from a small number of satellite cells. After further developmental steps, these fuse into muscle fibers.

Human satellite cells cultivated and proliferated for the first time
For the first time, the ECRC researchers have succeeded in demonstrating that it is possible to cultivate and proliferate human satellite cells and to maintain their regeneration potential for several weeks. They have thus achieved an important prerequisite for using the patient’s own cells for therapeutic purposes.

First success in mice
The ECRC researchers then tried out their therapy approach in mice in which muscle regeneration had been inhibited by irradiation. They grafted the muscle fragments containing the satellite cells, which following the hypothermia had been kept for two weeks in culture dishes, into the tibalis anterior muscle. The researchers found that the muscles of animals that had been treated with these fiber fragments regenerated particularly well.

Objective: to couple satellite cells with gene therapy
However, a genetic muscle disease cannot be successfully treated alone by transplanting muscle fragments. Professor Spuler: “The idea is therefore to equip the satellite cells additionally with a healthy gene that repairs the defective gene and then to transfect it with the aid of a non-viral ‘gene taxi’ into the muscles to be treated. In a first experiment with a ‘reporter gene’ in the Petri dish, Professor Spuler and her co-workers proved that this is possible in principle. The reporter gene fluoresces green when it is transfected into the satellite cell. As gene taxi the researchers use the Sleeping Beauty transposon – a jumping gene that can change its position in the genome. This transposon technique was developed several years ago by Dr. Zsuzsanna Izsvák (MDC) and Dr. Zoltán Ivics (Paul Ehrlich Institute, Frankfurt) and is considered to be a very promising delivery vehicle (vector) for gene therapy.

Before the method developed by Professor Spuler and her group can be used to benefit patients, some hurdles remain to be taken. So far, the transplantation has succeeded in small mice muscles. In clinical trials, the scientists and physicians want to determine whether this technique can be used in large human thigh muscles, which may be severely altered due to a muscular disease.