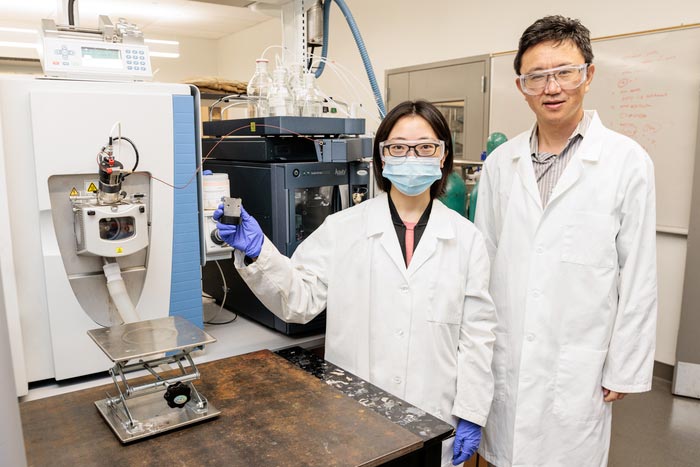 Researchers say a newly developed lab technique could spark a “paradigm shift” in biopharmaceuticals testing, promising to speed up drug discovery and development of therapeutic proteins and vaccines.

New Jersey Institute of Technology (NJIT) researchers have unveiled a new lab technique they say represents a “paradigm shift” in how pharmaceutical laboratories test and produce new protein-based drugs, such as therapeutic monoclonal antibodies being developed to treat a variety of diseases, from cancers to infectious diseases.

Researchers say their electrochemistry-based approach, described in the journal Analytical Chemistry, could allow for safety and quality testing of up-and-coming biotherapeutics to be done at a fraction of the time required by conventional methods, which typically require the lengthy and costly production of certain biomaterials used for sample testing.

The study was conducted in collaboration with researchers from Merck, Johnson & Johnson and Ohio University, and was supported by a $379,397 grant from the National Institutes of Health.

“This method we’ve developed at NJIT has the potential to have a major impact in quantitative proteomics, and it represents a paradigm shift in pharmaceutical industry in terms of monitoring biopharmaceutical product and process impurities for quality control,” said Hao Chen, the paper’s corresponding author and professor at NJIT’s Department of Chemistry and Environmental Sciences.

“With this study, we’ve now demonstrated an approach that can quantify drug product and process impurities much more quickly and accurately than had been possible. … We expect it to become very useful to facilitate therapeutic protein and vaccine development for treatment and prevention of different diseases in the future.”

Traditionally such testing, or protein quantitation, involves time-consuming preparation of synthetic isotope-labeled peptides which are used as internal standards to measure total protein concentrations in a sample — helping researchers actively monitor the efficacy and safety of therapeutic protein components throughout the drug development process.

To overcome this limitation, Chen’s lab developed a coulometric mass spectrometry (CMS) approach for absolute quantitation of proteins without the use of standards. The method instead applies liquid chromatography-mass spectrometry and an electrochemical flow cell to rapidly quantify and detect changes in target proteins or peptides based on electrochemical signatures.

“Instead of waiting for weeks to obtain standards or reagents in traditional approaches, one could carry out CMS quantitation experiments right away. Thus, it would facilitate tracking drug impurities discovered during the process and ensure their effective clearance with process optimization and control,” said Chen.

“Such an apparatus allows us to separate peptides after protein digestion with liquid chromatography, monitor peptide oxidation in the electrochemical flow cell to produce an electric current, and measure the oxidation yield with mass spectrometry,” explained the paper’s first author and NJIT Ph.D. student Yongling Ai. “The combination of electric current signals along with the oxidation yield provides sufficient information for absolute quantitation of peptides and proteins.”

In their study, the team demonstrated its CMS method by achieving absolute quantitation of multiple proteins (β- lactoglobulin B, α-lactalbumin and carbonic anhydrase) in a mixture in one run, without using any standards.

Notably, the team also showcased the method’s capabilities for detecting protein deamidation — a common degradation event in therapeutic proteins resulting from physical or chemical stresses throughout the manufacturing process and storage.

The team successfully quantified several protein degradation products, including a key intermediate of protein degradation — the formation of succinimide — which has never been done before with absolute quantification due to lack of standards, according to the study’s authors.

“The lack of standards is caused by the challenges in their de novo synthesis,” said Chen. “Being able to accurately quantify the deamidation products and intermediates could provide better understanding of therapeutic protein degradation, and potentially create a new way to investigate disease pathologies and aging processes.”

Now, Chen’s lab plans to apply their new method for largescale quantitation of thousands of proteins in one run. They also plan to improve the sensitivity of their CMS analysis to allow quantifying very low levels of proteins in complex biological samples, which could benefit research efforts ranging from clinical diagnostics and drug discovery to precision medicine for which identification and quantitation of samples at the molecular level is necessary.

“As proteins perform a vast array of functions within organisms, the importance of absolute protein quantitation is hard to overstate,” said Chen. “CMS should speed up processes for disease diagnosis, drug discovery and development, and it now opens a new door for biologists and biochemists to explore quantities of proteins in the human body that may serve important biological functions or roles as disease biomarkers and drug targets.”

The study, supported by a National Institutes of Health grant (1R15GM137311-01), has also laid the foundation for a new project proposal that has recently been awarded a National Science Foundation grant (CHE-2203284). The paper’s other contributors include Harsha P. Gunawardena from Johnson & Johnson, Merck scientist Xuanwen Shawn Li, professor Howard Dewald at Ohio University and NJIT professor Yong-Ick Kim.