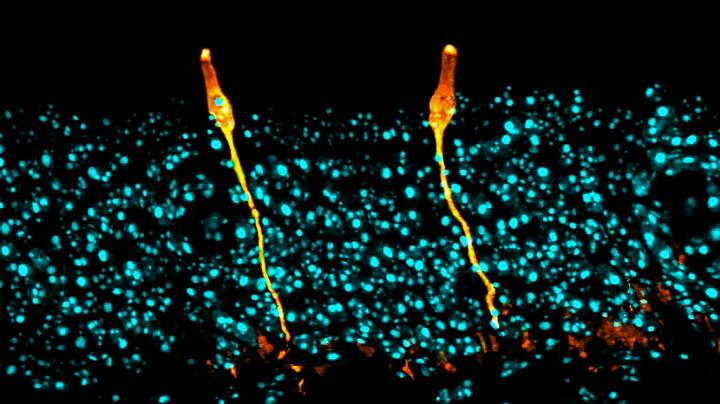 Pulmonary ionocytes (orange) extend through neighboring epithelial cells in the upper respiratory tract of the mouse, to the surface of the epithelial lining. Cell nuclei in cyan. Credit: Montoro et al./Nature 2018

In separate studies published online in Nature on Aug. 1, two independent research teams report the discovery of a new, rare type of cell in the human airway. These cells appear to be the primary source of activity of the CFTR gene, mutations to which cause cystic fibrosis, a multiorgan disease that affects more than 70,000 people worldwide.

Despite decades of study on CFTR and progress in treating the disease, there is still no cure. The new findings show that CFTR activity is concentrated in a small, previously unknown population of cells, which serve as promising targets for future therapeutic strategies against cystic fibrosis.

The researchers named the cells “pulmonary ionocytes” due to similarities with ionocytes, a type of cell found in the gills of freshwater fish and frog skin, which regulate salt balance.

“As researchers work toward cures for cystic fibrosis, knowing you are looking at 1 percent of the cell population seems essential for any type of trouble shooting to improve a therapy or develop new therapies,” said Allon Klein, co-corresponding author of one of the Nature studies and assistant professor of systems biology at HMS.

The studies also revealed the characteristics of other new, rare and poorly understood cell types, which expands the current understanding of lung biology and disease.

“Cystic fibrosis is an amazingly well-studied disease, and we're still discovering completely new biology that may alter the way we approach it,” said Jayaraj Rajagopal, co-corresponding author of the second study and HMS professor of medicine at Mass General. “We have the framework now for a new cellular narrative of lung disease.”

Both teams set out to build an atlas of the cells that make up the airway. Using single-cell sequencing technology, they analyzed gene expression in tens of thousands of individual cells isolated from human and mouse airways–one cell at a time.

Comparing patterns of gene expression and using previously described cells as references, the teams created comprehensive catalogues of different cell types and states, as well as their abundance and distribution.

The teams' analyses mapped out the genetic identities of both known and previously undescribed cell types. One new cell type, which they named pulmonary ionocytes, was particularly striking as these cells expressed higher levels of CFTR than any other cell.

Pulmonary ionocytes appear to play a role in this process, which is necessary for clearing mucus from the airways. Video: Daniel Montoro, Hui Min Leung, Vladimir Vinarsky.

Identified in the late 1980s, CFTR (cystic fibrosis transmembrane conductance regulator) codes for a protein that transports chloride ions across cell membranes. Mutations to CFTR can lead to the buildup of thick mucus in the lung, pancreas and other organs, which in turn leads to frequent respiratory infections and other symptoms that characterize cystic fibrosis. Scientists have long assumed that CFTR is expressed at low levels in ciliated cells, a common airway cell type.

The new studies, however, suggest that the majority of CFTR expression occurs in pulmonary ionocytes, which make up only around 1 percent of airway cells. Klein, along with Aron Jaffe, a co-leader of respiratory disease research at NIBR, and colleagues additionally showed that the activity of CFTR, not just its expression, relates to the number of pulmonary ionocytes in the tissue.

“With single-cell sequencing technology, and dedicated efforts to map cell types in different tissues, we're making new discoveries–new cells that we didn't know existed, cell subtypes that are rare or haven't been noticed before, even in systems that have been studied for decades,” said Broad core institute member and MIT professor of biology Aviv Regev, co-corresponding author of the study with Rajagopal.

When Regev, Rajagopal and colleagues disrupted a critical molecular process in pulmonary ionocytes in mice, they observed the onset of key features associated with cystic fibrosis, notably the formation of dense mucus. This finding underscores how important these cells are to airway-surface regulation, the researchers said.

Together, the teams' discoveries point to new strategies for treating cystic fibrosis, such as increasing the amount of pulmonary ionocytes to increase the amount of CFTR activity, said Jaffe, who is co-corresponding author of the study with Klein.

The identification of these cells can also help guide teams trying to use gene therapy to correct CFTR mutations, the authors suggest.

“We can use this information to be a bit more clever when we devise therapeutic approaches to cystic fibrosis,” Jaffe said.

The teams' analyses also shed light on new, rare or poorly described cell states and subtypes, and characterized changes to certain cells after injury or during development.

Klein, Jaffe and colleagues, for example, identified cell states that emerge or expand following damage or injury by studying regenerating tracheas. Using InDrops, a single-cell sequencing technology developed at HMS by Klein and colleagues, at multiple points during regeneration, the team could track how cell states specific to the injury response transitioned over time.

Rajagopal, Regev and colleagues developed a new method called Pulse-Seq to monitor development of cell types from their progenitors in the mouse airway, which were verified in human tissue. By adding a label to progenitor cells, they showed that mature cells in the airway arise from a common progenitor known as basal cells.

A comprehensive atlas of cell types and their genetic fingerprints, both in normal conditions and in development and regeneration, serves as potential baseline data for future studies of diseases and other health-related conditions, according to the research teams.

Rajagopal, Regev and colleagues, for example, found that a gene linked to asthma development is specifically expressed by ciliated cells. Another gene linked with asthma is expressed in tuft cells, which separated into at least two groups–one that senses chemicals in the airway and another that produces inflammation. These findings may inform understanding and treatment of the disease.

“We've uncovered a whole distribution of cell types that seem to be functionally relevant,” Rajagopal said. “What's more, genes associated with complex lung diseases can now be linked to specific cells that we've characterized. The data are starting to change the way we think about lung diseases such as cystic fibrosis and asthma.”

Lindsey Plasschaert, postdoctoral researcher at NIBR, and Rapolas ?ilionis, graduate student at Vilnius University, Lithuania and visiting scholar at HMS, are co-first authors, and Klein and Jaffe are co-corresponding authors of the study “A single-cell atlas of the airway epithelium reveals the CFTR-rich pulmonary ionocyte.”

Daniel Montoro, graduate student at HMS, and Adam Haber and Moshe Biton, both postdoctoral fellows at the Broad, are co-first authors, and Rajagopal and Regev are co-corresponding authors of the study “A revised airway epithelial hierarchy includes CFTR-expressing ionocytes.”

Author disclosures are listed in the respective studies.