Home / Fachgebiete / Biowissenschaften Chemie / New insights into the functioning of the liver
06.08.2020 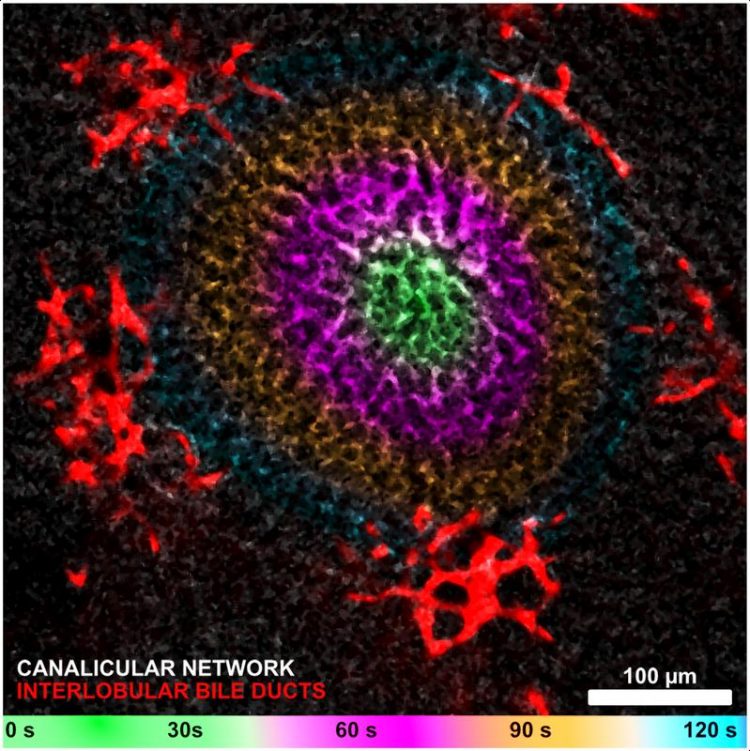 A diagnostic substance spreads symmetrically in all directions in the bile canaliculi of a mouse. The different colours illustrate the diffusion process over time (from green to blue). The larger bile ducts are shown in red. Source: Vartak/IfADo

In everyday life, we are constantly exposed to substances that are harmful: natural and artificial chemicals through food, medicine or even just the environment. The liver removes these toxic substances from the blood, transforming them into less harmful variants.

Liver cells, called hepatocytes, then excrete the substances into the “canal system” creating a concoction called bile. Countless bile canaliculi (a normal human liver has about 3.000 km of them) join larger pipes called bile ducts, which join together like streams entering a river that eventually flows into the intestine.

In the intestine, bile is used to help digestion and dissolve fatty substances. This is a dangerous game though. If the bile canal system leaks, toxic bile acid enters the liver tissue and cause severe inflammation and harm.

That is what happens in a majority of liver diseases, and understanding the transport of bile is therefore important for developing the best therapy for liver diseases.

An international research team led by IfADo scientist Dr. Nachiket Vartak is now providing new data that have the potential to change previous scientific results about the transport mechanism of bile acid.

Using new imaging and signal-processing techniques, they have been able to show in animal experiments that molecules such as bile salts diffuse from the canalicular zone – like ink spreading in standing water. Only in the larger bile ducts, does the water itself move in a flow.

This is a surprising result, because since the late 1950s all medical textbooks have stated that bile already flows through the canaliculi because of the osmotic force. According to this theory, bile salts would draw water from the liver cells into the bile canaliculi, which overflows into the bile ducts transporting bile salts along with it.

However, this transport has never been directly observed or measured. The tiny width of the canaliculi (100 times smaller than that of a human hair) makes them inaccessible to conventional methods.

Applying complex microscopy methods and mathematical analyses, the IfADo group has now succeeded in taking fluorescent signals in very rapid image series of very small tissue regions and analyzing them to reveal exactly how molecules move in the bile canaliculi.

Surprisingly, it turned out that there is no measurable flow at all in the canaliculi. The result flew in the face of commonly held beliefs in liver biology.

To confirm the result with an independent second method, the team used intravital microscopy of livers, injected with an invisible substance that could be turned visible by exposing it to UV light. By making the substance visible in a small circle after it had entered the canal system, the team essentially created a “drop of ink” in the liquid of the bile canal system.

The question than simply was, does this drop move like it is observed in flowing water, or does it only spread like it is in standing water? This direct observation of the microscopic structure showed that the diagnostic substance is transported by diffusion through the bile canaliculi of the intact liver. It only spreads like in stagnant water.

“One can imagine the bile canaliculi as a pond connected to a river. The water in the river flows, but the water in the pond does not. If you pour a drop of ink into the pond, it will spread in the pond and will eventually enter the river. But it does not flow there, it diffuses,” explains Nachiket Vartak, head of the IfADo research group “Functional Imaging”.

Controversy on the best treatment strategy

The seemingly subtle difference between flow or diffusion is relevant when it comes to choosing the best therapeutic strategy for people with liver diseases, such as fatty liver inflammation. Up to now, it has been assumed that there must be a flow in the bile canaliculi, which is stopped when canaliculi are constricted. This results in a build-up of pressure which would damage the liver tissue.

This led to an effort to find drugs that reduce the presumed flow which would supposedly also prevent the damaging pressure build-up. However, based on the current IfADo findings, this concept must be critically questioned. After all, it is not aimed at the actual cause of fatty liver inflammation, according to Nachiket Vartak: “It would be more important to focus on the molecular mechanisms that are responsible for leaking bile ducts and thus cause to diseases.”

“Our new findings require a scientific debate in liver research, which will lead to an adjustment of the doctrine to the new observation. It is to be hoped that this will lead to long-term progress in the treatment of liver diseases”, summarizes IfADo Director Prof. Dr. Jan Hengstler.

The Leibniz Research Centre for Working Environment and Human Factors (IfADo), under the legal sponsorship of the “Forschungsgesellschaft für Arbeitsphysiologie und Arbeitsschutz e.V.”, investigates the potential and risks of modern work on the basis of life and behavior sciences. The results are used to derive principles for the performance- and health-promoting design of the working environment. For this purpose, around 220 employees are working at IfADo. The research centre is financed by institutional funding from the German federal and state governments as well as from third-party funds (2019 total 14.7 million euros). IfADo is a member of the Leibniz Association, which comprises 96 independent institutions.

The study was supported by the German Federal Ministry of Education and Research within the program Systems Medicine of the Liver (LiSyM).