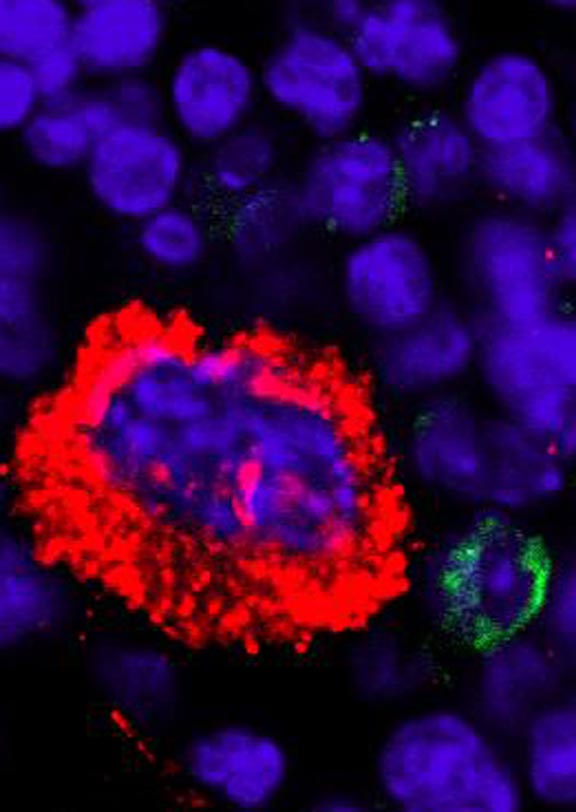 The findings from the lab of Stowers Investigator Linheng Li, Ph.D., described in the Oct. 19 issue of the journal Nature Medicine, could cause researchers to rethink what they know about the workings of megakaryocytes and potentially lead to new treatments for patients recovering from chemotherapy or organ transplantation.

“Our results suggest that megakaryocytes might be used clinically to facilitate adult stem cell regeneration and to expand cultured cells for adult stem cell transplants,” says Meng Zhao, Ph.D., a postdoctoral fellow at Stowers and lead author on the study.
Stowers researchers discovered that megakaryocytes directly regulate the function of murine hematopoietic stem cells—adult stem cells that form blood and immune cells and that constantly renew the body’s blood supply. These cells can also develop into all types of blood cells, including white blood cells, red blood cells, and platelets.

Because of their remarkable ability to renew themselves and differentiate into other cells, hematopoietic stems cells are the focus of intense research and have been used to treat many diseases and conditions. The transplantation of isolated human hematopoietic stem cells is used in the treatment of anemia, immune deficiencies and other diseases, including cancer.

These findings are supported by similar research from the laboratory of Paul S. Frenette, Ph.D., at the Albert Einstein College of Medicine, also reported in the Oct. 19 issue of Nature Medicine.

The Stowers Institute for Medical Research funded the research.

Patients recovering from chemotherapy or organ transplantation often have dangerously low levels of blood cells—leaving them weak and vulnerable to infection. Research findings from the Stowers Institute, reported in the Oct. 19 issue of the journal Nature Medicine, describe new insights that could potentially lead to treatments for patients with low blood cell counts. Stowers Investigator Linheng Li, Ph.D., who led the study explains that megakaryocytes, “mega” cells found in bone marrow, regulate the function of human blood stem cells—adult stem cells that form blood and immune cells and constantly renew the body’s blood supply. He and his colleagues found that megakaryocytes tell blood stem cells when their services aren’t needed and when they need to start proliferating to meet increased demand. Study results suggest that megakaryocytes might be used clinically to jump-start adult stem cell regeneration and to expand cultured cells for adult stem cell transplants.

The Stowers Institute for Medical Research is a non-profit, basic biomedical research organization dedicated to improving human health by studying the fundamental processes of life. Jim Stowers, founder of American Century Investments, and his wife, Virginia, opened the Institute in 2000. Since then, the Institute has spent over 900 million dollars in pursuit of its mission.

Currently, the Institute is home to nearly 550 researchers and support personnel; over 20 independent research programs; and more than a dozen technology-development and core facilities.