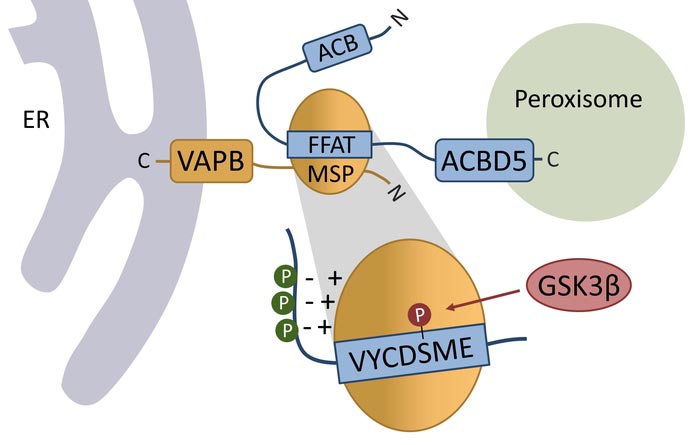 Phosphorylation of the ACBD5 FFAT domain regulates the interaction with VAPB and thus, peroxisome-ER interaction, differently
Credit: University of Exeter

A pioneering study has revealed how cellular compartments (organelles) are able to control how much they interact and cooperate.

The study, led by Professor Michael Schrader and Dr Joseph Costello from the University of Exeter, builds on their recent discovery of how two cell organelles – called peroxisomes and the endoplasmic reticulum (ER) – associate with each other and work together.

This cooperation is crucial for the production of specific lipids, which are essential for the function of nerve cells and can protect cells from oxidative damage.

Organelles are the functional units of a cell. Like organs in a body, they perform specialised functions.

To allow survival of the cell and organism, organelles have to interact and cooperate.

How this is mediated and regulated in the cell is an important and challenging question in cell biology.

This interaction links both organelles together and allows transfer of lipids between them.

The new study now revealed how this interaction is regulated at the molecular level.

“Organelles are not constantly tethered to each other, this would be disadvantageous,” said Professor Schrader.

“They also need to keep distance and change location in the cell to meet other organelles.

“Our findings reveal how regulation of peroxisome-ER contacts in mammalian cells works and also provide one of the first clear examples for a physiological role of phosphorylation of peroxisomal proteins,” said Dr Costello.

Phosphorylation reactions are critical for many cellular processes in biology.

The addition (or removal) of a phosphate to a protein can change its properties and thus, its function or activity.

The researchers revealed that a binding motif of ACBD5 (called FFAT motif), which is essential for the interaction with a protein domain of VAPB, can be phosphorylated at multiple amino acids.

Remarkably, phosphorylation at only one amino acid in the core region of the FFAT motif blocks binding of ACBD5 to VAPB and inhibits peroxisome-ER membrane contacts.

Moreover, the researchers identified the enzyme, the kinase GSK3β, which phosphorylates ACBD5 within the cell.

In addition, other phosphorylation sites adjacent to the core region were identified, whose phosphorylation is promoting ACBD5-VAPB interaction, revealing a complex regulatory mechanism.

The researchers cooperated with the laboratory of Professor Bettina Warscheid at the University of Freiburg, Germany, who is an expert in phospho-proteomics.

“FFAT motifs are found in many other proteins involved in VAP protein interaction at other locations in the cell,” said Professor Schrader.

“Our findings expand the current model of FFAT motifs and point to a general mechanism of their regulation by phosphorylation.

“Understanding how they are regulated, is also disease-relevant.”

Patients with a defect in ACBD5 suffer from a peroxisomal disorder with severe damage to the brain and retinas, affecting eyesight, whereas VAPB and GSK3β have been linked to amyotrophic lateral sclerosis (ALS) and fronto-temporal dementia (FTD).

The research was supported by the Biotechnology and Biological Sciences Research Council, and the EU Marie Skłodowska-Curie Innovative Training Network PerICo.