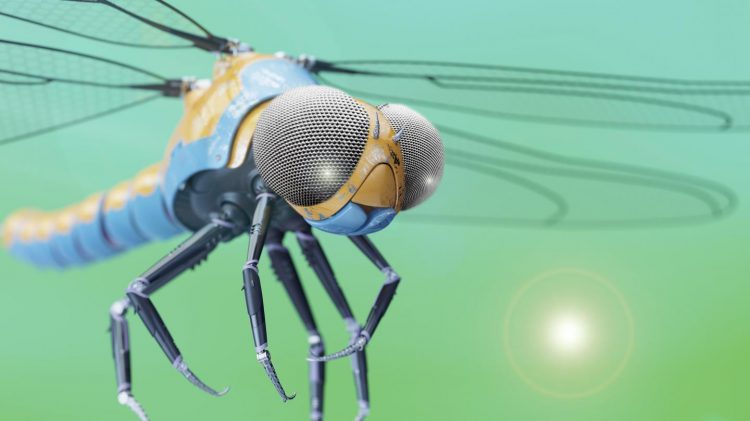 Researchers have created a bio-inspired compound eye that is helping scientists understand how insects sense an object and its trajectory with such speed. The compound eye could also be useful for 3D location systems for robots, self-driving cars and unmanned aerial vehicles. Credit: Le Song, Tianjin University

If you've ever tried to swat a fly, you know that insects react to movement extremely quickly. A newly created biologically inspired compound eye is helping scientists understand how insects use their compound eyes to sense an object and its trajectory with such speed.

The compound eye could also be used with a camera to create 3D location systems for robots, self-driving cars and unmanned aerial vehicles.

In The Optical Society (OSA) journal Optics Letters, researchers from Tianjin University in China report their new bio-inspired compound eye, which not only looks like that of an insect but also works like its natural counterpart. Compound eyes consist of hundreds to thousands of repeating units known as ommatidia that each act as a separate visual receptor.

“Imitating the vision system of insects has led us to believe that they might detect the trajectory of an object based on the light intensity coming from that object rather than using precise images like human vision,” said Le Song, a member of the research team. “This motion-detection method requires less information, allowing the insect to quickly react to a threat.”

The researchers used a method known as single point diamond turning to create 169 microlenses on the surface of the compound eye. Each microlens had a radius of about 1 mm, creating a component measuring about 20 mm that could detect objects from a 90-degree field of view. The fields of view of adjacent microlenses overlapped in the same way that ommatidia do for most insects.

“This uniform light receiving ability of our bio-inspired compound eye is more similar to biological compound eyes and better imitates the biological mechanism than previous attempts at replicating a compound eye,” explained Song.

To use the artificial compound eye for measuring 3D trajectory, the researchers added grids to each eyelet that help pinpoint location. They then placed LED light sources at known distances and directions from the compound eye and used an algorithm to calculate the 3D location of the LEDs based on the location and intensity of the light.

The researchers found that the compound eye system was able to rapidly provide the 3D location of an object. However, the location accuracy was reduced when the light sources were farther away, which could explain why most insects are nearsighted.

How insects see the world

“This design allowed us to prove that the compound eye could identify an object's location based on its brightness instead of a complex image process,” said Song. “This highly sensitive mechanism suits the brain processing ability of insects very well and helps them avoid predators.”

According to the researchers, the ability of the new bio-inspired compound eye to detect an object's 3D location could be useful for small robots requiring fast detection from a very lightweight system. It also offers a new way for biologists to study the visual systems of insects.

The researchers are planning to imbed the localization algorithm into platforms such as integrated circuits to allow the system to be incorporated into other devices. They are also developing ways to mass produce the compound eye lenses to reduce the unit cost.