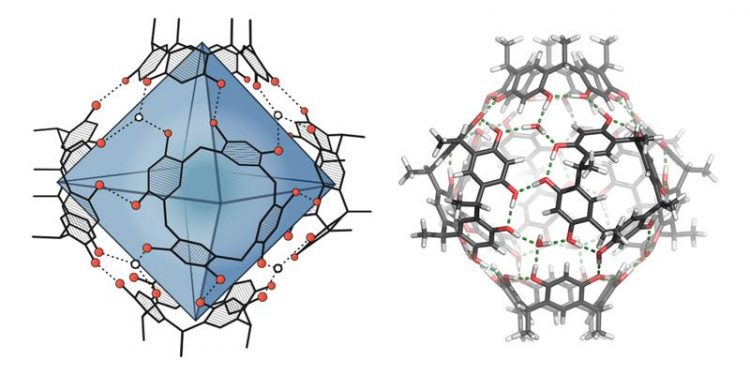 Molecular capsule: on the left, the around 1.4 cubic nanometer-large cavity is highlighted in blue. On the right, the cohesion of the capsule via hydrogen bonds (green dashed lines) is visible. University of Basel, Department of Chemistry

Terpenes are the largest class of chemical compounds that are found in nature. They include, for example, many essential oils, steroids and clinically relevant substances such as the antimalarial drug artemisinin or the chemotherapy medication paclitaxel.

Despite increasingly refined synthesis methods, chemists have found it very difficult to synthesize these structurally complex compounds in the lab. The process often requires numerous, not always selective synthesis steps, and the yields tend to be low.

The research group led by Professor Konrad Tiefenbacher from the University of Basel’s Department of Chemistry has now developed a synthesis concept for terpenes copied from nature.

The decisive step takes place in the cavity of a spherical compound – known as a molecular capsule. The resorcinarene capsule used has been known about for around 20 years but its catalytic effect has only very recently been described, by Tiefenbacher and others. In organic solvents, the capsule forms itself from six smaller, ring-shaped compounds with the help of hydrogen bonds.

In a similar way to nature, the researchers led by Tiefenbacher begin with a starting material for the synthesis, which is enclosed by the capsule. The capsule environment then enables the formation of the terpene. In addition, control elements previously integrated into the precursor help avoid unwanted side effects and direct the transformation towards the desired product.

The applicability of the concept was proven by the four-step synthesis of the natural product isolongifolene, with the formation of a ring-shaped terpene compound catalyzed by the capsule as the key step. This succeeded – when compared with conventional syntheses – in significantly fewer steps and with a good yield. Using labeled precursors and with the help of computer simulations, the Basel chemists were also able to clarify the reaction mechanism.

“Our next goal is to use capsules as an artificial enzyme in the creation of even more complex terpenes,” says Professor Tiefenbacher. “In order to do so, we must learn to better control the spatial arrangement of the precursor within the capsule, either by modifying the existing system or by developing new catalysts.” This may open up new ways of synthesizing terpene compounds that would otherwise not be readily accessible.