Neural Interaction in Periods of Silence 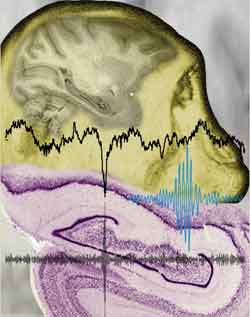 While in deep dreamless sleep, our hippocampus sends messages to our cortex and changes its plasticity, possibly transferring recently acquired knowledge to long-term memory. But how exactly is this done?

Many invasive studies in nonhuman primates and clinical investigations in human patients have demonstrated that the hippocampus, one of the oldest, most primitive brain structures, is largely responsible for the long term retention of information regarding places, specific events, and their contexts, that is, for the retention of so-called declarative memories. Without the hippocampus a person may be able to learn a manual task over a period of days, say, playing a simple instrument, but –remarkably – such a skill is acquired in the absence of any memory of having practiced the task before.

The consolidation of declarative memory is thought to occur in two subsequent steps. During the first step, the encoding phase, hippocampus rapidly binds neocortical representations to local memory traces, while during subsequent “off-line” periods of calmness or sleep the new traces are concurrently reactivated in both hippocampus and cortex to strengthen the cortico-cortical connections underlying learned representations. But what is the neural basis of this hippocampal-cortical dialog, and how does hippocampus communicate with the rest of the brain?

For the very first time, Nikos Logothetis, director of the Department for Physiology of Cognitive Processes at the Max Planck Institute for Biological Cybernetics and his team used so-called neural event triggered functional magnetic resonance imaging (NET-fMRI) in both anesthetized and awake, behaving monkeys to characterize the brain areas that consistently increased or decreased their activity in relationship to a certain type of fast hippocampal oscillations known as ripples. Ripples occur primarily during deep sleep and can be measured with electrophysiological methods. Using intracranial recordings of field potentials, the scientists demonstrated that the short periods of aperiodic, recurrent ripples are closely associated with reproducible cortical activations that occur concurrently with extensive activity suppression in other brain structures.

Interestingly, structures were suppressed whose activities could, in principle, interfere with the hippocampal-cortical dialog. The suppression of activity in the thalamus, for instance, reduces signals related to sensory processing, while the suppression of the basal ganglia, the pontine region and the cerebellar cortex may reduce signals related to other memory systems, such as that underlying procedural learning, for example riding a bicycle.

The aforementioned findings offer revealing insights into the large-scale organization of memory, a cognitive capacity emerging from the activation of widespread neural networks which were impossible to study in depth before now using either functional imaging alone or traditional single neuron recordings. Capacities such as perception, attention, learning and memory are actually best investigated using multimodal methodologies such as the NET-fMRI method employed in the MPI study. It is difficult to overstate the importance of the study of the neural mechanisms underlying such capacities, as the vast majority of neurological failures actually reflect dysfunctions of large-scale networks, including cortical and subcortical structures.

More Information about the research of Nikos Logothetis: http://www.kyb.tuebingen.mpg.de/research/dep/lo.html