Nanotubes change the shape of water 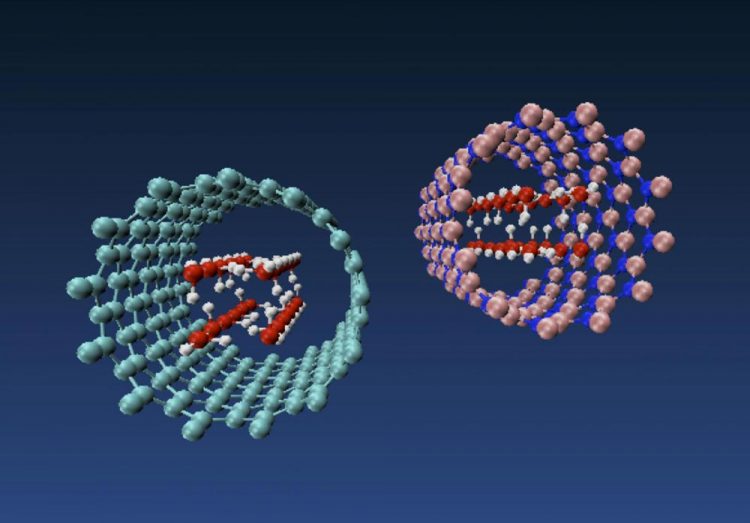 Molecular models of nanotube ice produced by engineers at Rice University show how forces inside a carbon nanotube at left and a boron nitride nanotube at right pressure water molecules into taking on the shape of a square tube. The phenomenon is dependent upon the diameter of the nanotube. Credit: Multiscale Materials Laboratory/Rice University

First, according to Rice University engineers, get a nanotube hole. Then insert water. If the nanotube is just the right width, the water molecules will align into a square rod.

Rice materials scientist Rouzbeh Shahsavari and his team used molecular models to demonstrate their theory that weak van der Waals forces between the inner surface of the nanotube and the water molecules are strong enough to snap the oxygen and hydrogen atoms into place.

Shahsavari referred to the contents as two-dimensional “ice,” because the molecules freeze regardless of the temperature. He said the research provides valuable insight on ways to leverage atomic interactions between nanotubes and water molecules to fabricate nanochannels and energy-storing nanocapacitors.

A paper on the research appears in the American Chemical Society journal Langmuir.

Shahsavari and his colleagues built molecular models of carbon and boron nitride nanotubes with adjustable widths. They discovered boron nitride is best at constraining the shape of water when the nanotubes are 10.5 angstroms wide. (One angstrom is one hundred-millionth of a centimeter.)

The researchers already knew that hydrogen atoms in tightly confined water take on interesting structural properties. Recent experiments by other labs showed strong evidence for the formation of nanotube ice and prompted the researchers to build density functional theory models to analyze the forces responsible.

Shahsavari's team modeled water molecules, which are about 3 angstroms wide, inside carbon and boron nitride nanotubes of various chiralities (the angles of their atomic lattices) and between 8 and 12 angstroms in diameter. They discovered that nanotubes in the middle diameters had the most impact on the balance between molecular interactions and van der Waals pressure that prompted the transition from a square water tube to ice.

“If the nanotube is too small and you can only fit one water molecule, you can't judge much,” Shahsavari said. “If it's too large, the water keeps its amorphous shape. But at about 8 angstroms, the nanotubes' van der Waals force starts to push water molecules into organized square shapes.”

He said the strongest interactions were found in boron nitride nanotubes due to the particular polarization of their atoms.

Shahsavari said nanotube ice could find use in molecular machines or as nanoscale capillaries, or foster ways to deliver a few molecules of water or sequestered drugs to targeted cells, like a nanoscale syringe.

Supercomputer resources were provided with support from the National Institutes of Health and an IBM Shared Rice University Research grant.

This news release can be found online at http://news.rice.edu/2018/08/24/nanotubes-change-the-shape-of-water/

Molecular models of nanotube ice produced by engineers at Rice University show how forces inside a carbon nanotube at left and a boron nitride nanotube at right pressure water molecules into taking on the shape of a square tube. The phenomenon is dependent upon the diameter of the nanotube. (Credit: Multiscale Materials Laboratory/Rice University)

Located on a 300-acre forested campus in Houston, Rice University is consistently ranked among the nation's top 20 universities by U.S. News & World Report. Rice has highly respected schools of Architecture, Business, Continuing Studies, Engineering, Humanities, Music, Natural Sciences and Social Sciences and is home to the Baker Institute for Public Policy. With 3,970 undergraduates and 2,934 graduate students, Rice's undergraduate student-to-faculty ratio is just under 6-to-1. Its residential college system builds close-knit communities and lifelong friendships, just one reason why Rice is ranked No. 1 for lots of race/class interaction and No. 2 for quality of life by the Princeton Review. Rice is also rated as a best value among private universities by Kiplinger's Personal Finance. To read “What they're saying about Rice,” go to http://tinyurl.com/RiceUniversityoverview.