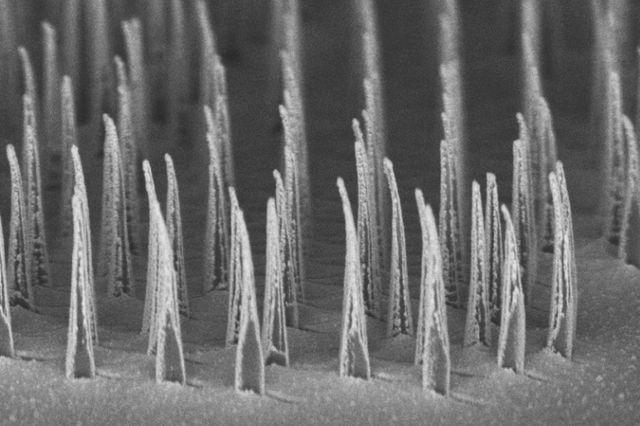 This image shows an array of nanospears before being released for delivery of genetic information to cells. Credit: UCLA Broad Stem Cell Research Center/ACS Nano

UCLA scientists have developed a new method that utilizes microscopic splinter-like structures called “nanospears” for the targeted delivery of biomolecules such as genes straight to patient cells. These magnetically guided nanostructures could enable gene therapies that are safer, faster and more cost-effective.

The research was published in the journal ACS Nano by senior author Paul Weiss, UC Presidential Chair and distinguished professor of chemistry and biochemistry, materials science and engineering, and member of the Eli and Edythe Broad Center of Regenerative Medicine and Stem Cell Research at UCLA.

Gene therapy, the process of adding or replacing missing or defective genes in patient cells, has shown great promise as a treatment for a host of diseases, including hemophilia, muscular dystrophy, immune deficiencies and certain types of cancer.

Current gene therapy approaches rely on modified viruses, external electrical fields or harsh chemicals to penetrate cell membranes and deliver genes straight to patient cells. Each of these methods has its own shortcomings; they can be costly, inefficient or cause undesirable stress and toxicity to cells.

To overcome these barriers, Weiss and Dr. Steven Jonas, a clinical fellow in the UCLA Broad Stem Cell Research Center Training Program, led a research team that designed nanospears composed of silicon, nickel and gold. These nanospears are biodegradable, can be mass-produced inexpensively and efficiently, and, because of their infinitesimal size — their tips are about 5,000 times smaller than the diameter of a strand of human hair — they can deliver genetic information with minimal impact on cell viability and metabolism.

“Just as we hear about Amazon wanting to deliver packages straight to your house with drones, we're working on a nanoscale equivalent of that to deliver important health care packages straight to your cells,” explained Jonas, who is training in the division of pediatric hematology/oncology at UCLA Mattel Children's Hospital. In the near future, Jonas hopes to apply nanotechnologies to deploy cell and gene therapies quickly and widely to the pediatric cancer patients he treats.

The construction of nanospears was inspired by the work of their collaborators, Hsian-Rong Tseng, a professor of molecular and medical pharmacology, and Xiaobin Xu, a postdoctoral fellow in Weiss' interdisciplinary research group. Tseng and Xu are both co-authors of the study.

“Based on Xiaobin's nanomanufacturing work, we knew how to make nanostructures of different shapes in massive numbers using simple fabrication strategies,” said Weiss, who is also a member of the California NanoSystems Institute. “Once we had that in hand, we realized we could make precise structures that would be of value in gene therapies.”

Weiss and Jonas are not the first to conceive of using guided nanostructures or robotic “nanomotors” to enhance gene therapies, however existing methods have limited precision and require potentially toxic chemicals to propel the structures to their targets.

By coating their nanospears with nickel, Weiss and Jonas eliminated the need for chemical propellants. A magnet can be held near a lab dish containing cells to manipulate the direction, position and rotation of one or many nanospears. In the future, Weiss and Jonas envision that a magnetic field could be applied outside of the human body to guide nanospears remotely within the body to treat genetic diseases.

Weiss and Jonas tested their nanospears as vehicles for a gene that causes cells to produce a green fluorescent protein. About 80 percent of targeted cells exhibited a bright green glow, and 90 percent of those cells survived. Both numbers are a marked improvement on existing delivery strategies.

Much like gene therapy, many forms of immunotherapy — a process in which patient-specific immune cells are genetically engineered to recognize and attack cancer cells — rely on expensive or time-consuming processing methods.

“The biggest barrier right now to getting either a gene therapy or an immunotherapy to patients is the processing time,” Jonas said. “New methods to generate these therapies more quickly, effectively and safely are going to accelerate innovation in this research area and bring these therapies to patients sooner, and that's the goal we all have.”

Weiss and Jonas have been collaborating with UCLA researchers to optimize the delivery of gene therapy strategies that have long been in the works.

“One of the amazing things about working at UCLA is that for each of the targeted diseases, we collaborate with leading clinicians who already have gene therapies in development,” Weiss said. “They have the gene-editing cargo, model cells, animal models and patient cells in place so we are able to optimize our nanosystems on methods that are on the pathway to the clinic.”