Multiple sclerosis: an attack on the brain’s control and storage center 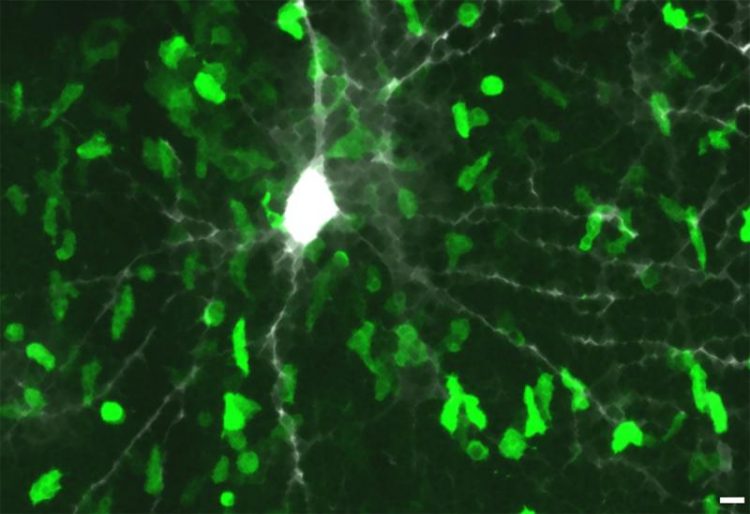 Scientists at the Institute for Neuroimmunology and Multiple Sclerosis Research of the University Medical Center Goettingen (UMG) have developed a new model that makes it possible for the first time to specifically investigate damage to the grey matter. Thereby they discovered a new disease mechanism of multiple sclerosis.

The researchers found out which immune cells attack the brain’s control and storage center, the so-called “grey matter”. I this part of brain nearly all signals are interconnected, processed and stored. The results of these studies are published in the February issue of the prestigious scientific journal NATURE.

The disastrous result: the brain shrinks and there is an irreversible neurological loss of function. The Goettingen researchers also discovered that such destructive immune cells are particularly numerous in the blood of patients with multiple sclerosis of the chronic-progressive course. This finding could be relevant for diagnostic and therapeutic aspects of multiple sclerosis.

A neurological worst case scenario: attack on the control Center

Our immune system protects us from harmful intruders such as pathogenic bacteria or viruses. Sometimes, though, the immune cells attack the body’s own tissue by mistake. Such a disastrous “misunderstanding” seems to be the case in multiple sclerosis too. This important insight was gained from research using animal models: here certain immune cells, the so-called T cells, see the brain tissue as the enemy and attack it, with the well-known results.

“Strangely, in such studies a targeted immune attack on the grey matter could never be found – it was only the white matter that became inflamed”, says Prof. Dr. Alexander Flügel, director of the UMG’s Institute für Neuroimmunology and Multiple Sclerosis Research and senior author of the publication. “For this reason, a central feature of multiple sclerosis remained a mystery, with the serious consequence that mechanisms behind damage to the grey matter could not be systematically researched and therefore very little is known about the causes of grey matter damage in humans.”

In point of fact, in multiple sclerosis the grey matter is regularly afflicted by inflammatory responses – new research results indicate that it is especially these lesions that are responsible for the irreversible damage to the brain tissue and the inexorable worsening of symptoms in multiple sclerosis.

Why is the grey matter attacked in multiple sclerosis?

It is exactly in this area where the Goettingen research can contribute new insights. The scientists have found out when the attack on the grey substance occurs. Usually in experimental models of multiple sclerosis, cells are employed that target the protective coat surrounding nerve fibers, the so-called myelin sheath to trigger an multiple sclerosis-like disease. These cells cause a disease characterized by pareses and the familiar inflammation in the white matter. The Goettingen researchers departed from this well-known schema. They investigated immune cells that target a neuronal protein called beta-synuclein.

“Unexpectedly, the animals’ brains showed completely dissimilar disease signs. Also the lesions were different in that the pathological cells nearly exclusively invaded the grey matter”, says Dr. Francesca Odoardi, co-senior author of the study. This inflammation caused – above all after several flare-ups – an irreversible damage and shrinkage of the grey matter, similar to what is observed in humans with multiple sclerosis. Indeed, the researchers found that beta-synuclein-targeting T cells were present in higher numbers in the blood of multiple sclerosis patients, and an especially high number in those with a chronic-progressive disease course.

OUTLOOK: WHAT CAN ONE LEARN?

The results obtained by the Goettingen scientists could have important relevance for the human disease. The ability to reproduce autoimmune damage to the grey matter in a model and therefore to be able to systematically investigate it could lead to the development of therapeutic strategies to counteract such damage. In addition, an investigation into the pathogenic T cells in human blood could make it possible to better inform patients with multiple sclerosis about the possible disease risks and the best therapeutic options.

The grey matter, the brain’s control center
Our brain works similarly to a computer in that it transmits and processes electrical signals. The grey matter is the brain’s storage and processing center, its hard drive so to speak. The nerve cells are situated here that receive signals from the environment or the body’s organs and then process these, i.e. connect, store and relay them, and allow the brain to control the most important functions of our body; we can make deliberate movements, think, remember, feel and plan. In contrast, the brain’s white matter mainly consists of nerve processes encased by a special insulating layer, the so-called myelin sheath. The myelin sheaths promote signal transmission. One can therefore think of the white matter as being like the electrical wiring in a computer; it is specialized to relay incoming and outgoing signals as quickly and precisely as possible.

Neurological diseases can damage both the grey and the white matter. Grey matter damage has the more serious consequences, as we know very well from observing the advanced stages of Alzheimer’s or Parkinson’s diseases. In these diseases, the neurons in the grey substance perish and the people suffering them either gradually lose the ability to remember and to think (so-called Alzheimer’s dementia) or they lose the ability to coordinate their movements (so-called Parkinson’s shaking palsy).

The disease multiple sclerosis also adversely affects the grey matter. Multiple sclerosis can cause serious chronic neurological dysfunction and typically affects young adults, people in their most active stage of life. Therefore, multiple sclerosis is not only significant for its tragic health impairment but also for its detrimental socio-economic effects.

IMAGE: T cells targeting beta-synuclein invade the grey matter. Shown here is a rat’s brain cortex, one frame of a microscopic recording. The pathogenic T cells (green) have infiltrated the grey matter tissue in great numbers. One can see some of these T cells in direct contact with a nerve cell and its axons (grey-white). Magnification bar: 10µm. Image: Institute for Neuroimmunology and Multiple Sclerosis Research.