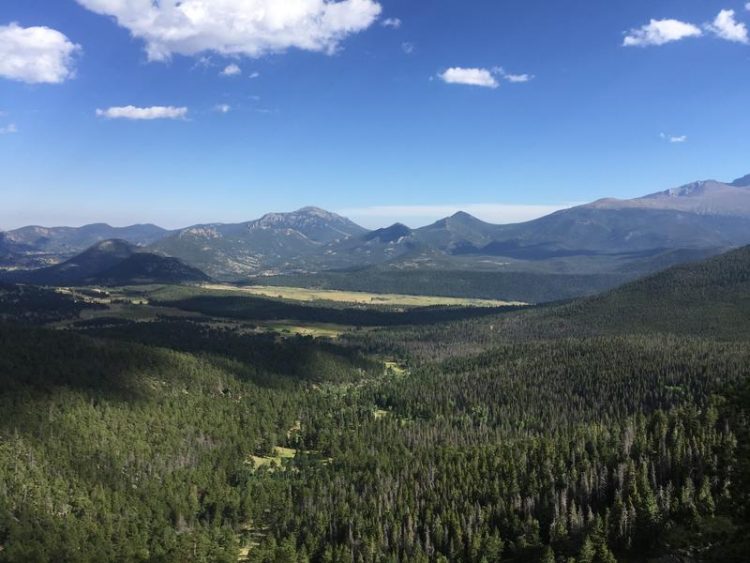 Mid- and high-latitude ecosystems from the Northern Hemisphere are some of the ecosystems expected to be more affected by the increases in pathogen proportions. The picture shows forests in the west of the USA. Picture: Manuel Delgado-Baquerizo

Global warming will increase the proportion of plant pathogens in soils across the globe. Many of these plant pathogens also affect important food and medicinal plants, which is likely to have a long-term impact on the world population's food security.

This is the result of an experimental study published in the journal Nature Climate Change with significant contribution by researchers from the German Centre for Integrative Biodiversity Research (iDiv), Leipzig University (UL) and Martin Luther University Halle-Wittenberg (MLU).

A teaspoon of soil contains millions of microbes. Most of these soil organisms are beneficial to humankind: They regulate our climate, support the fertility of our soils, and help us produce food and fiber. Others, however, are capable of devastating entire crops, resulting in important economic losses and even human starvation.

Diseases of widespread food crops regularly destroy entire harvests. At the end of the 1990s, one of the most common soil-borne cereal fungi, Fusarium, affected the wheat and barley production in North America, causing an annual loss of around one billion US Dollars.

A new study, conducted by an international team of scientists including researchers of iDiv, UL and MLU, provides experimental and global observational evidence that the proportion of soil-borne plant pathogens will increase in a warmer world.

The researchers reveal the most common fungal plant pathogens found in soils across the globe, and suggest that soils are a critical reservoir of some of the most important plant pathogens worldwide.

This is likely to affect many of the globally most important crops like wheat, sunflowers or vegetables, but also cosmetic or medicinal plants like Hibiscus and Aloe Vera as well as wild species serving as a food source for livestock.

The study also provides the first global atlas of soil-borne plant pathogens highlighting the locations on Earth where these organisms are more common today and will be in the near future. The projections take into account various so-called shared socio-economic pathways (SSPs), including sustainability, regional inequality and fossil-fueled development.

“The insights of this study are particularly valuable as they combine data from a global observation network with data from a targeted experiment,” says Prof Nico Eisenhauer, head of the Experimental Interaction Ecology group at iDiv and UL. “This allowed us to provide scientific proof for causal relationships between warming temperatures and increasing prevalence of pathogens in the soils across the globe.”

The researchers collected soil samples from 235 different locations across 6 continents and 18 countries, spanning an entire range of climates from deserts to tropical forests. Moreover, they used a warming field experiment located in Madrid. For the last decade, the experiment has been maintained by the laboratory of co-author Fernando T. Maestre, who cooperated with scientists at iDiv in 2019 during his sabbatical year at iDiv's synthesis center sDiv.

This opens the door to predict what regions of our planet will be more vulnerable to future microbial plant pests. “Many of the soil-borne fungal taxa affect the health and productivity of economically important crops and wild species serving as food source for livestock worldwide,” says co-author Dr Carlos António Guerra, researcher at iDiv and MLU. “The impacts are likely to have implications for sustaining a growing human population especially in the least-developed countries, where the majority of people rely to a large degree on livestock and natural products supported by natural ecosystems.”

The study highlights that large regions of Asia, Africa, Australia and America contain high proportions of soil-borne plant pathogens. These regions correspond to warm climates such as those from hot deserts and tropical forests. The impacts of warming are particularly evident in soils across the Northern Hemisphere, towards the Arctic, as well as in South Africa, for which all the scenarios show a systematic temperature rise. Many of the affected areas also have a large human population as well as high growth rates, which might indicate potential future threats to their nutrition.

“Global warming is already here, and we will need to adapt to the consequences of decades of heavy fossil fuel consumption,” says the first author of the paper Dr Manuel Delgado-Baquerizo from the Pablo de Olavide University Sevilla. “Knowing more about how climate change is going to affect the microbial communities which control our capacity to produce food and fiber is fundamental for humanity, especially, if we are up to feeding a continuously growing global population.”

This study was made possible by iDiv’s synthesis centre sDiv, funded by the DFG – Deutsche Forschungsgemeinschaft (FZT-118).

https://www.youtube.com/watch?time_continue=9&v=97lbPMh1YbU&feature=emb_… Short video about the topic