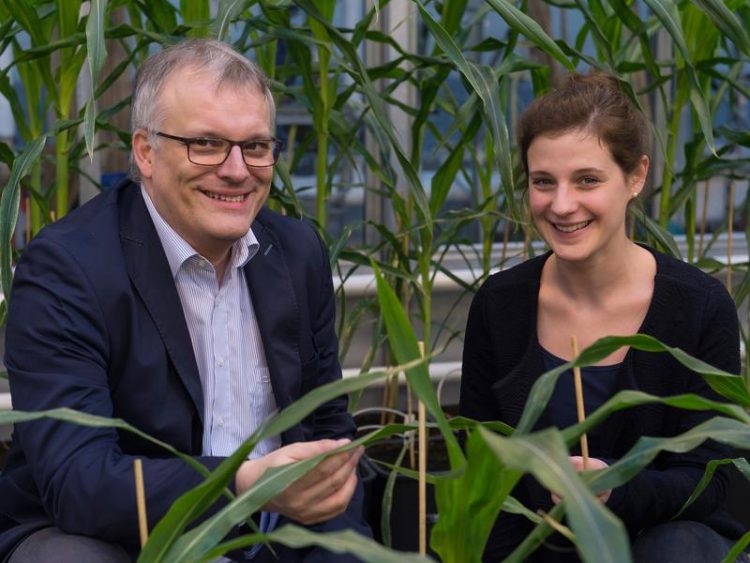 Study the genes of maize: Prof. Dr. Frank Hochholdinger and Jutta Baldauf from the Institute of Crop Science and Resource Conservation (INRES) at the University of Bonn in a greenhouse. © Photo: Barbara Frommann/Uni Bonn

Plant breeders have long known that crossbreeding of different inbred lines has a positive effect on the yield. However, the causes of this so-called “heterosis effect” are largely unclear. “For that reason we took a closer look at one specific inbred-hybrid combination a few years ago”, explains Prof. Dr. Frank Hochholdinger from the Institute of Crop Science and Resource Conservation (INRES) at the University of Bonn.

“We were able to show that the hybrid offspring has many more active genes than its parents. But at that time we did not know if this applied just to this specific combination of parent plants, or if it was a general mechanism.”

In the present study, the scientists therefore examined not just one, but six different inbred-hybrid combinations. The parental inbred lines were distantly related and evenly distributed throughout the entire maize phylogenetic tree. This is almost like pairing a dachshund with a sheepdog, then a pug, and finally with a labrador.

“We have now analyzed which genes were transcribed in the original plants and which in the offspring”, explains Jutta Baldauf from INRES. “This confirmed the findings of our earlier work: The hybrids always contained a far larger number of active genes than their parents.”

Maize plants contain two variants of each gene, also known as alleles. One of these alleles comes from the female, the other from the male parent. They are often not equally active, with one variant being read more frequently than the other. Some alleles may even be completely turned off.

As the propagation of inbred lines means that they are self-pollinated over many generations, the two alleles of most of their genes are identical. This can lead to certain genes not being transcribed at all. However, these genes may be active in another inbred line. If these parent lines are now crossed with each other, active genes of one parent complement inactive genes of the other parent in the offspring.

“On average, we therefore count more active genes in the offspring”, explains Baldauf. And not just a few more: The scientists put the genetic gain at 500 to 600 additionally active genes on average. The genetic material of maize comprises around 40,000 genes in total. “The complementation of SPE genes, the abbreviation stands for “Single Parent Expression”, could be one of the factors why hybrids perform better than their parents”, says Prof. Hochholdinger.

Maize has many genes that have remained virtually unchanged for millions of years. These “old” genes are so important for the plant that mutations in them can dramatically affect plant performance. In contrast, most SPE genes developed later in the course of evolution. They do not take on vital key functions and can therefore be active in one maize inbred line, but not in another. Many of them belong to certain groups of so-called transcription factors. These are proteins that regulate the activity of other genes.

The results may facilitate the cultivation of better performing maize varieties in the medium term. “With SPE genes, we provide plant growers with genetic markers for this purpose”, emphasizes Hochholdinger. “It may be possible to choose specific hybridization partners on the basis of these markers, which could result in particularly high-yielding hybrids.” These are immensely important for the long-term nutrition of the increasing world population: Experts anticipate that agricultural yields have to increase by 70 percent by 2050. Maize is already the most productive crop at present; it therefore plays a particularly important role in nutrition.