Molecular motors run in unison in a metal-organic framework 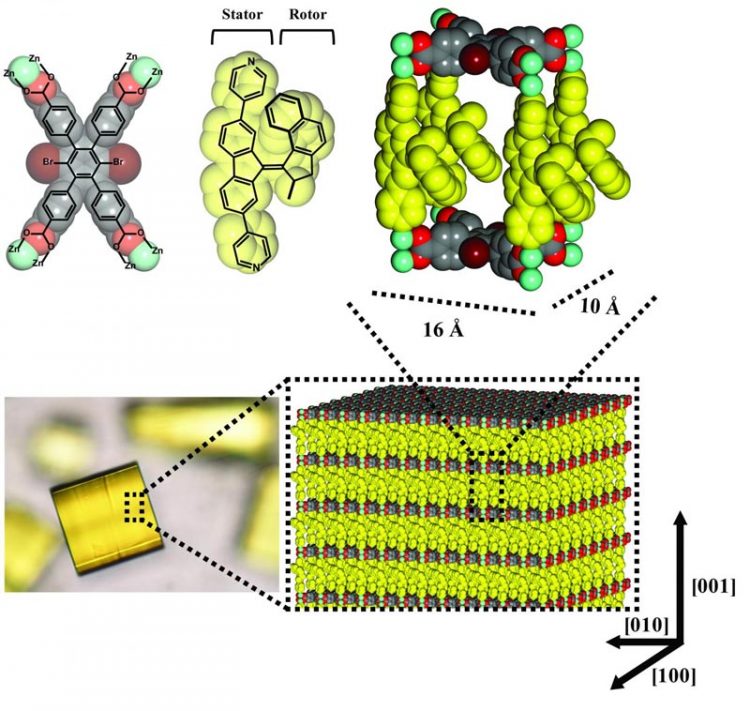 The building blocks of the motorized metal-organic framework 'cages' and the crystal containing a large number of 'cages'. Credit: University of Groningen

Light-driven rotary molecular motors were first created by Ben Feringa, an organic chemist at the University of Groningen. Prof. Feringa and two others shared the 2016 Nobel Prize in Chemistry for this discovery.

Groups of various types of nanoscale molecular motors have been attached to surfaces and incorporated into gels, liquid crystals and muscle-like fibers where they can perform work on a macro scale, through cooperative action. However, the creation of an ordered array of these motors in a 3D solid-state material has, until now, remained beyond our grasp.

A team of scientists at the University of Groningen, led by Ben Feringa, Assistant Professor Sander Wezenberg, and Professor Wesley Browne, took up this challenge. They have now produced a working system containing 3 x 1020 (a three followed by twenty zeros) light-driven unidirectional rotary motors per cubic centimeter, which all run in unison.

The scientists housed the motors in metal-organic frameworks (MOFs), molecular cages made from metals with interconnecting 'struts' of organic molecules. Ordered 3D stacks of these molecular cages form crystals.

Once they had grown these crystals, the team replaced the vertical pillars with motor molecules, using a process known as solvent-assisted linker exchange. It was not possible to insert the motors at an earlier stage, as they would not have been able to withstand the conditions needed to synthesize the MOFs.

The stator components of the molecular motors function as the pillars of the cages, while the rotor components remain free inside the cages. The cages were designed to be large enough to allow the motors to run freely, without hindrance. The motors themselves were powered by illuminating the crystal with UV light.

Tests on these systems showed that the motors were predominantly oriented in the same direction and that their rotational speed was similar to the speeds achieved in liquids. The team was delighted, as previous attempts by other groups to incorporate rotaxanes (another type of molecular machine) into MOFs showed that these motors were not able to run freely.

Thus, it is now possible to create a 'motorized MOF', in which large numbers of molecular motors are packed densely together to create macroscopic crystals. In theory, crystals like this could be used to control the diffusion of gases, or they could function as light-powered pumps in microfluidic systems.

Another potential application would be to feed the motorized MOF with materials that would then react inside the cages before being pumped out again. However, much more research is needed before any of these applications can become a reality. One potential issue, for example, is that materials passing through the cages could interfere with the operation of the motors, causing the system to clog up. Nevertheless, the system presented by Prof. Feringa and his team will provide a springboard for further explorations of the collective behavior of rotary motors integrated into 3D arrays.