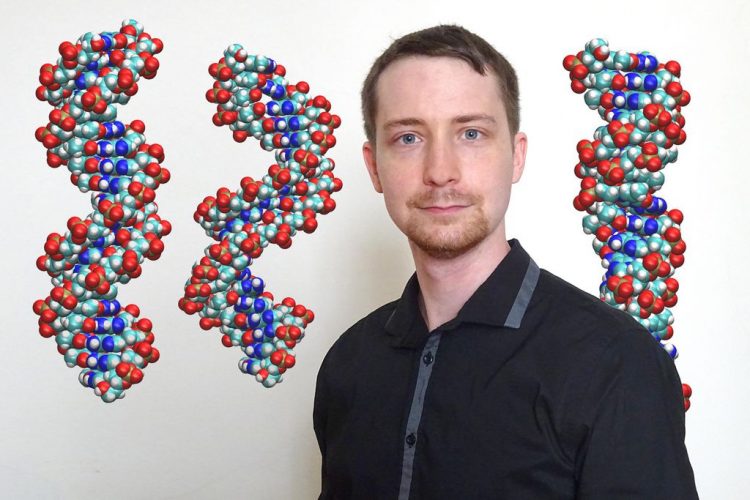 When large forces, for example in bridge construction, act on a heavy beam, the beam will be slightly deformed. Calculating the relationship between forces, internal stresses and deformations is one of the standard tasks in civil engineering.

But what happens when you apply these considerations to tiny objects – for example, to a single DNA double helix?

Experiments with DNA molecules show that their mechanical properties are completely different from what those of macroscopic objects – and this has important consequences for biology and medicine.

Scientists at TU Wien (Vienna) has now succeeded in explaining these properties in detail by combining ideas from civil engineering and physics.

Unexpected behaviour at the molecular level

At first glance, you might think of the DNA double helix as a tiny little spring that you can simply stretch and compress just like you would an ordinary spring. But it is not quite that simple: If you stretch a piece of DNA, you would actually expect the number of turns to decrease.

But in certain cases the opposite is true: “When the helix gets longer, it sometimes twists even more,” says civil engineer Johannes Kalliauer from the Institute of Mechanics of Materials and Structures at TU Wien. “Apart from that, DNA molecules are much more ductile than the materials we usually deal with in civil engineering: They can become 70 % longer under tensile stress.”

These strange mechanical properties of DNA are of great importance for biology and medicine: “When the genetic information is read from the DNA molecule in a living cell, the details of the geometry can determine whether a reading error occurs, which in the worst case can even cause cancer,” says Johannes Kalliauer. “Until now, molecular biology has had to be satisfied with empirical methods to explain the relationship between forces and the geometry of DNA.”

In his dissertation, Johannes Kalliauer got to the bottom of this issue – and he did so in the form of a rather unusual combination of subjects: His work was supervised on the one hand by the civil engineer Prof. Christian Hellmich, and on the other hand by Prof. Gerhard Kahl from the Institute of Theoretical Physics.

“We used molecular dynamics methods to reproduce the DNA molecule on an atomic scale on the computer,” explains Kalliauer. “You determine how the DNA helices are compressed, stretched or twisted – and then you calculate the forces that occur and the final position of the atoms.” Such calculations are very complex and only possible with the help of large supercomputers – Johannes Kalliauer used the Vienna Scientific Cluster (VSC) for this purpose.

That way, the strange experimental findings could be explaned – such as the counterintuitive result that in certain cases the DNA twists even more when stretched. “It's hard to imagine on a large scale, but at the atomic level it all makes sense,” says Johannes Kalliauer.

Within the atomic models of theoretical physics, interatomic forces and distances can be determined. Using certain rules developed by the team based on principles from civil engineering, the relevant force quantities required to describe the DNA strand as a whole can then be determined – similar to the way the statics of a beam in civil engineering can be described using some important cross-sectional properties.

“We are working in an interesting intermediate world here, between the microscopic and the macroscopic,” says Johannes Kalliauer. “The special thing about this research project is that you really need both perspectives and you have to combine them.”

This combination of significantly different size scales plays a central role at the Institute for Mechanics of Materials and Structures time and again. After all, the material properties that we feel every day on a large scale are always determined by behaviour at the micro level.

The current work, which has now been published in the “Journal of the Mechanics and Physics of Solids”, is intended to show on the one hand how to combine the large and the small in a scientifically exact way, and on the other hand to help to better understand the behaviour of DNA – right down to the explanation of hereditary diseases.