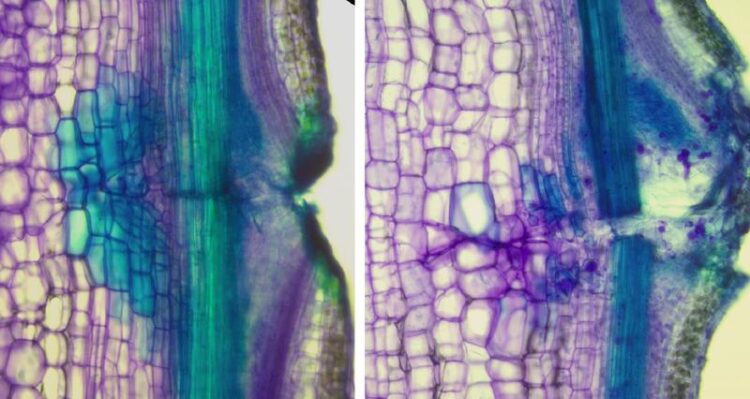 Plants have veins that transport nutrients through their body. These veins are highly organized. The hormone auxin travels directionally from cell-to-cell and provides cells with positional information, coordinating them during vein formation and regeneration. Scientists at IST Austria now discovered how cells translate auxin signals into forming a complex system of veins. This phenomenon also applies to wound healing and might lead to more mechanically resistant plants and further agricultural implications.

The human body uses veins and blood to transport nutrients and oxygen throughout the body. Plants use a similar approach, the vascular systems. These veins transport nutrients for survival and define the size, structure, and position of new leaves and allow long-range communication between distant organs.

Now, scientists from the group of Prof Jiri Friml at IST Austria, discovered how the plant hormone auxin dictates the newly formed veins’ position. “Auxin decides which cells will differentiate into vascular tissue and orchestrates them to form intricate vein patterns,” explains Jakub Hajný, who led the study. When cells have no ability to sense auxin signal, plant forms disorganized veins with disconnections that limit nutrients distribution. In case of mechanical damage, it also decreases regeneration after wounding.

Cell orientation in a tissue

Already decades ago, scientists suspected that auxin is the vein-inducing signal organizing tissue into the formation of conserved vein patterns. However, scientists could not understand how the cells decrypt this chemical signal into a cellular response so far. The Friml group managed to identify the responsible proteins, called CAMEL and CANAR which serves as auxin sensor.

The CAMEL/CANAR complex most likely perceives the auxin concentration in the neighborhood and allows cells to synchronize their orientations to create continuous veins. “It is basically a molecular compass for cell orientation, only instead of a magnetic field, it detects auxin concentration,” explains Jakub Hajný. Thus, the team discovered molecular machinery underlying auxin-mediated vein formation and regeneration.