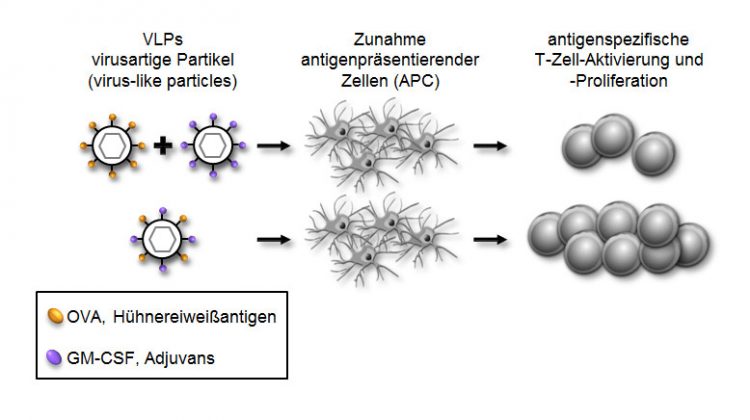 The combination of antigen+adjuvant in virus-like particles trigger enhanced immune responses as compared to separate delivery of these components. This can be used for the development of new vaccines Source: PEI

So-called modular vaccines in which the antigen – the pathogen component against which the immune protection is to be developed – is physically connected (conjugated) to the adjuvant (effect enhancer) convey a significantly stronger immune response than vaccines in which the components are present separately. Modular vaccines are thus particularly immunogenic. The reason for this improved effect is probably the simultaneous transport of both components to the antigen presenting cells.

Can the effectiveness of those vaccines which are based on virus-like particles (VLPs) also be enhanced by such a modular construction? A research group of Dr. Zoe Waibler, head of Section 'Product Testing of Immunological Biomedicines' of Division Immunology at the Paul-Ehrlich-Institut (PEI) has investigated this question jointly with researchers of the research group 'Molecular Allergology' and Section 'Product Testing of Immunological Biomedicines', also at the PEI.

Vaccines based on virus particles are of interest because the immune system responds directly to virus particles as part of the normal defence against infections. VLPs already present the basis for vaccines authorised in Europe for the protection against human papilloma viruses.

VLPs do not contain any nucleic acids and cannot replicate in the target cells. Certain VLPs are also an attractive platform for vaccine development because new vaccines can be created from them by interchanging the antigen. Besides, the antigen and the adjuvant can be presented to the immune system on their surface simultaneously.

The researchers of the PEI used chicken egg white (ovalbumin) as model antigen and GM-CSF (granulocyte macrophage-colony stimulating factor) as adjuvant. The receptor for this cytokine can be found on various immune cells which present the antigen to additional immune cells, thus triggering an immune response.

The researchers used various approaches to prove that these modular VLPs activate important immune cells (T-helper cells and cytotoxic T cells). And this stimulation turned out to be significantly stronger if both adjuvant and antigen were presented jointly on these VLPs.

In the next steps, the PEI researchers will check the effects observed in the cell cultures in an animal model and will examine whether protection from defined pathogens can be conveyed using the VLPs thus obtained.

https://www.sciencedirect.com/science/article/pii/S0161589018301640 – Fulltext with link to the pdf-Version (available until July 17)
https://www.ncbi.nlm.nih.gov/pubmed/29852456 – Publication Abstract
https://www.pei.de/EN/information/journalists-press/press-releases/2018/09-modul… – This press release on the Paul-Ehrlich-Institut Website