Modified drug gives a ‘green light’ for its own success 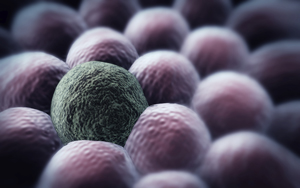 Cancer drugs can be modified to specifically target tumour sites to help personalize cancer treatment. And while it is relatively easy to determine if the drugs have been delivered to the correct location, it is more difficult to monitor their therapeutic success.

Now, a team led by Bin Liu from the A*STAR Institute of Materials Research and Engineering in Singapore, in collaboration with Ben Zhong Tang at Hong Kong University of Science and Technology, has developed an anticancer drug with an inbuilt mechanism that shows if it is working[1].

Platinum-based drugs are effective against many cancers, killing cells by triggering cellular suicide, or apoptosis. These drugs can, however, have severe side effects. Nontoxic forms can be modified, as a type of prodrug, to convert to their toxic form only after entering the targeted tumour cells, so as not to harm noncancerous cells.

Liu and colleagues went one step further by modifying a platinum-based prodrug to not only target tumor cells effectively, but also show whether or not it was having the desired effect. According to Liu, this added feature could be crucial for improving cancer treatment.

“Early evaluation of a patient’s response to a specific cancer therapy is important in clinical applications because it can minimize the duration of ineffective courses,” explains Liu. “The effectiveness of cancer treatment is commonly evaluated using magnetic resonance imaging to measure the tumor size, but this is unsatisfactory as the change in size is not obvious at the early stages of therapy.”

In their new system, Liu and her team included an apoptosis sensor that is released when the prodrug converts to its toxic form inside the targeted tumor cells. The toxic form triggers cell apoptosis and activates an enzyme called caspase 3, which then cleaves the apoptosis sensor and causes it to fluoresce green. This provides a visual signal that the drug is killing the cells.

Liu and her colleagues tested the mechanism by treating cultured cancer cells with the modified platinum prodrug. They observed a gradual increase in fluorescence in the cancer cells, reaching a maximum level of fluorescence six hours after treatment. Noncancerous cells were not affected in the same way, further proving the effectiveness of their targeting mechanism.